Having a roommate nowadays is a necessity rather than an option. As rental fees continue to rise all too fast while incomes remain stagnant, more people prefer and opt to live with a roommate in order to split or cut rental costs and share living expenses. Even if having a roommate is cost-efficient, it is important to take note that the perfect roommate does not exist. And because of that, there is a need to establish ground rules through the use of a roommate contract. With a comprehensive contract, you create an opportunity for both of you and your roommate to dwell in a safe and harmonious rental living space.

What Is a Roommate Contract?

American situational comedies such as Big Bang Theory, New Girl, How I Met Your Mother, and Friends have similar storylines that revolve around roommates living together. Such sitcoms make it seem like the United States is the roommate capital of the world based on these television shows. And true enough, in 2017, the Pew Research Center found out through their survey that there were nearly 79 million adults living in a shared household. The said number is equivalent to 31.9% of the US adult population. 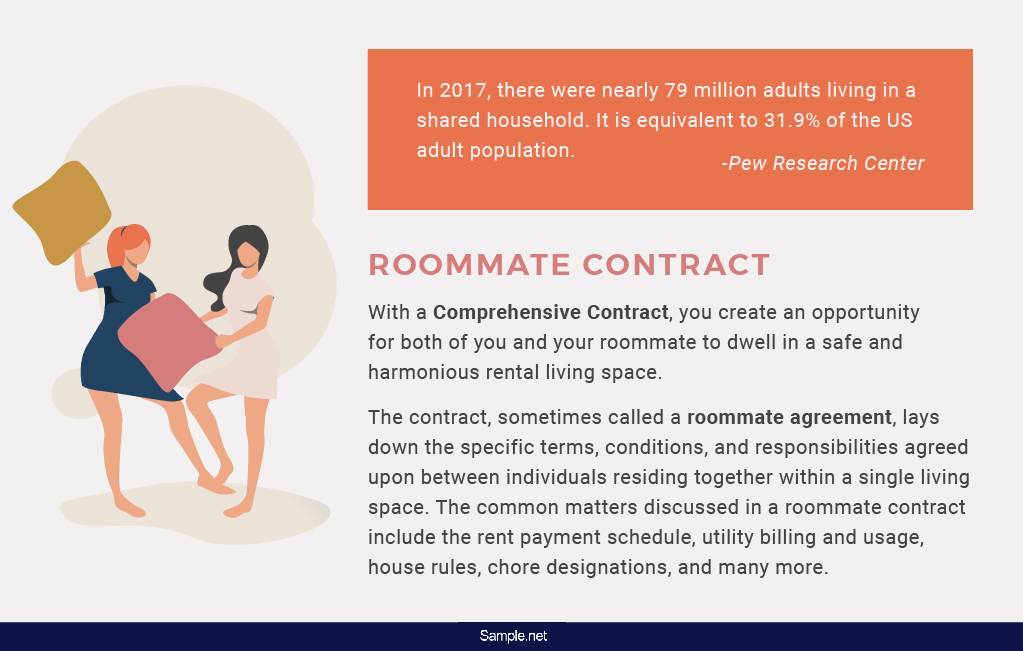 Importance of a Roommate Contract

The high rental costs are too much of a problem already that dealing with roommate-related problems should be the least of your concerns. Having a roommate contract allows tenants to define the general house rules and divide the expenses and rental costs. By doing so, you pave the way for a conducive living space both beneficial for you and your roommate. In the event of disputes, you can make use of this contract as proof that both parties agreed and signed the terms, conditions, and obligations you drafted yourselves. Rest assured that a roommate contract can help in keeping everyone on the same page along with a sense of accountability for their behavior and actions or lack thereof.

With the use of a roommate contract, you protect each other’s rights without being demanding and demeaning. Writing a roommate contract allows you to further explain the responsibilities of each tenant such as implementing individual obligations as co-tenant and providing a clear understanding of how financial obligations get managed among yourselves. Apart from that, you can also establish all necessary security and safety measures to ensure a safe environment for room sharing.

Elements of a Roommate Contract

Name and Home Address of Parties Involved: The most important element your roommate contract must have is the legal names of your roommates. Writing down the names of the parties establishes a sense of accountability and responsibility to those who are involved. This element is especially important in the event that you would need to use the roommate contract in small claims court. If you do end up using the roommate contract in court, do not forget to include the home addresses of you and your roommate.Rent: Statista conducted a survey in 2017 where they found out that 16 percent out of the 41,000 respondents earning an annual income of $30,000 or less were unable to pay their rent in full three months prior to the survey period. With this, you should not forget to discuss the rent in the roommate contract so that the parties involved will feel accountable. A roommate contract enables you to indicate who pays specific portions of the rent and to split the rent evenly between you and your roommate. When your roommate does not pay their portion of the rent, this element of your rental contract plays a vital role in a when you file in small claims court. You can simply show the contract in court to prove that your roommate had signed and agreed to pay a specific amount as their share of the rent.Security Deposit: Like most rental properties, most landlords would require their tenants a security deposit before moving in. Instead of letting someone pay for it altogether, a roommate contract can divide this obligation between you and your roommate evenly. Including the details of the security deposit in the contract is useful if your roommate moves out ahead of you since you can lay out the terms and conditions as to how this process gets handled.Utilities: There are various ways on how utility costs are divided between you and your roommates. Whatever your decision might be, it is important to include this in the roommate contract. One way of dividing utility responsibilities is by category and naming a roommate under each specific roommate. For example, you deal with electricity and water supply while your roommate’s name is under WiFi and cable connections. Your roommate contract should be able to clearly state how the bills get split and how often these get paid.Cleaning and Maintenance: Imagine living with people who do not take their part in the cleanliness and maintenance of your rental space―frustrating, right? More often than not, this is one of the reasons why many roommates get into an argument. With the help of a roommate agreement, you can conveniently create a system where you create cleaning schedules between you and your roommate to avoid any conflicts in the duration of your stay. You can even indicate in your roommate contract that each of you will keep personal spaces clean and organized while you both take turns at keeping common areas tidy and well-managed.Guests and Parties: If either or both of your roommates like hosting parties and inviting guests over, then you should set ground rules about having guests and hosting parties in your shared space. Not everyone is a fan of living in a place similar to a party house and not everyone enjoys being with another stranger for a guest. But with a roommate contract, you and your roommate can draw decisions like the allowed number of guests can visit within the day, the duration of their stay, and whether or not you allow overnight guests to stay.Drinking and Smoking: Even if smoking and drinking are legal in your state, you still need to respect each other’s preferences when it comes to drinking and smoking. While most landlords ban smoking within their rental property, it is still important to further include it in your roommate contract to further enforce it. Other than being both an issue for minors, there are some people who simply don’t want these no matter what their legal status is.Noise Control and Observance of Quiet Times: You and your roommate may have different school or work schedules that there is a possibility where your roommate is still asleep when you arrive from school or work. To ensure that both can still have their after school or work activities, be sure to include noise control and quiet time rules in your roommate contract. You can define the hours of the day when each should either limit volumes or observe silence.Other Special Considerations: There are other matters that are not often included in most standard contracts such as health concerns of all aspects, room design, and privacy or personal property concerns. You should discuss with your roommate about the other special things you would like to include in the roommate contract so each of you can set guidelines on how you can deal with it. 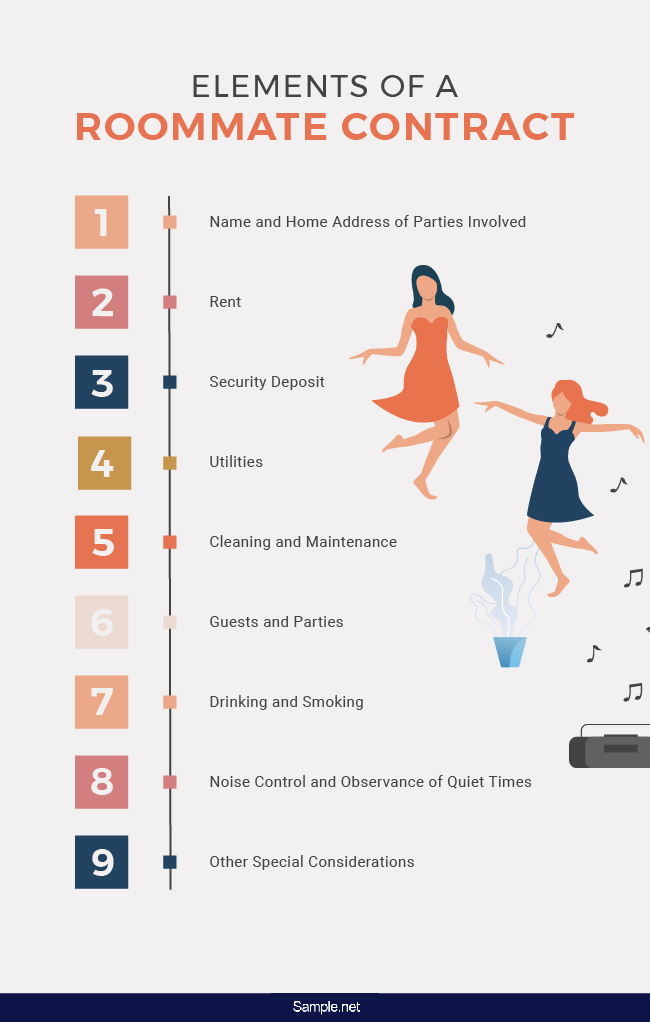 How to Create a Roommate Contract

If you already have experience living with a roommate before, you might already know that it can be both a memorable and stressful experience. With this kind of experience, you might have already learned your lesson and that is to ensure that house rules are addressed and implemented before you start living together. If you have no experience drafting a roommate contract before, consider taking notes from our easy-to-follow steps below to keep you guided.

To ensure the legality of your roommate contract, be sure to write each other’s full legal name and home addresses at the very beginning of the roommate contract. Other than that, indicate the move-in date of each roommate, the length of each other’s lease, the name of your landlord, the total and undivided rent, and the security deposit. Missing any of these crucial details will only risk the contract to become unenforceable.

Step 2: Secure the Clauses or Elements

As soon as you are done covering the basic roommate information, the thing to do is to go over the major clauses or elements that you should include in your roommate contract. Among the major clauses or elements that you need to include in the contract are the division of rent and utility payment, rules regarding guests, and the schedule for quiet hours. Determine how you divide the rent and utility bills especially if you decide to have unequal payments due to some circumstances such as when only one of you makes use of a certain utility. Set rules regarding guests because there is a possibility that each of you might have varying opinions about having guests in your shared space. Define each of your quiet hours so that each of you can prevent causing any kind of nuisance to each other.

Step 3: Go Over Your Draft

Before printing and signing the contract, be sure to go over your draft first to check if you have covered everything that both of you and your roommate wanted to include in the roommate contract. Apart from looking out for grammatical errors and spelling mistakes, you should also consider checking the accuracy and completeness of the contents you input in the roommate contract. Clarify every clause and provisions to avoid any confusions and conflicts later on.

Step 4: Affix Your Signature on the Roommate Contract 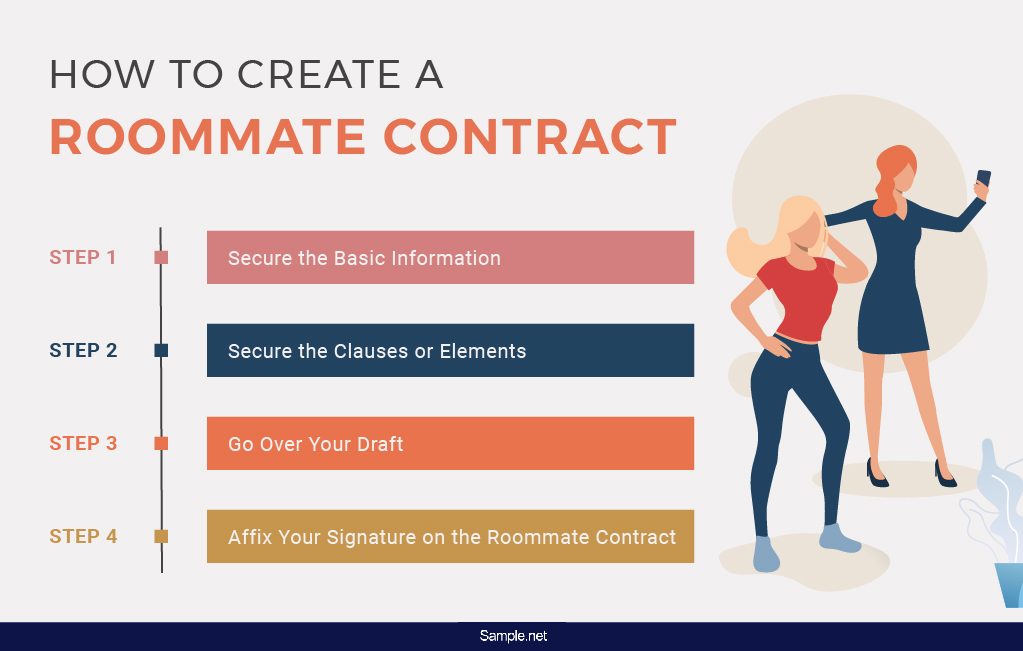 The Dos and Don’ts of a Roommate Contract

The price of rent is not decreasing anytime soon and if you want to cut down the living costs, having a roommate to split it with might be the most ideal solution. However, having roommates pose various challenges especially with the possibility that both of your backgrounds, beliefs, lifestyles, and preferences might clash. This is when the role of a roommate contract enters. With a roommate contract, you will feel assured that each tenant will have a sense of responsibility and accountability as a co-tenant. In order for a roommate contract to work its magic, it’s important to know the things you must and must not do before, during, and after drafting a roommate contract.

1. Do meet with your roommate prior to the move-in date.

If both of you have enough time to spare, consider meeting up with your roommate before you move in and start living together or before you sign any rental lease agreement. Establishing house rules from the get-go saves you so much time, ensures everyone is on the same page and leaves no room for unnecessary conflicts in the near future.

When discussing and deciding on the ground rules for your roommate contract, be open-minded at all times. Disagreements are inevitable down the road but if both of you will keep an open and flexible mind from the start, then whatever differences each of you possess, you will surely find ways on how you can work things out.

It is important to discuss the common roommate problems with your roommate so you can determine the possible actions on how to deal with these when conflicts arise. The topmost common problems are cleanliness, varying sleeping schedules, lack of respect toward each other’s personal properties, issues related to visitors, bills, privacy concerns, and personality clashes.

2. Don’t neglect what you’ve signed up for.

As soon as you and your roommate sign the contract, be sure to not neglect the duties and responsibilities stipulated in the roommate contract. Don’t be a burden to your roommate and own up what you’ve signed up for. Both of you need to familiarize the contents of the contract so you won’t have any excuses when either or both of you will breach the contract.

3. Don’t put off the drafting of the contract.