21+ SAMPLE Affidavit for Proof of Identity in PDF | MS Word

With the constant development of technology, it is easier for us to collect information as well as share them. A single click on our digital devices leads us to thousands or even millions of data. However, it also has a downside. The availability of our personal information on the Internet makes us prone to frauds and thieves. Data from Statista revealed that in 2019, there are more than 100 000 cases of identity theft complaints in California alone. While this may be hard to fight altogether, the government and private entities are taking measures to make sure that people are the ones who claim they are through an affidavit for proof of identity.

21+ SAMPLE Affidavit for Proof of Identity

What is an Affidavit for Proof of Identity?

Stolen checks, fraudulent change of address, and social security number misuse—these are some examples of identity theft. These thieves can do more than just stealing your personal information. More than just your finances, they can take away from you the reputation you’ve worked hard to maintain. One way to protect individuals from this mischief is to have an affidavit for proof of identity.

In a broader sense, an affidavit is a written statement from an individual proving that something is true. Generally, this sworn or confirmed statement by oath or affirmation serves as evidence in court. An example of this document is an affidavit for proof of identity. An affidavit for proof of identity is a written document affirming the identity of an affiant or the individual who swears to the said statement. Some essential parts of an affidavit include the full legal name, birthday, current address, document name, and its purpose.

Other Types of Affidavits You Probably Need

The word affidavit stemmed from a Medieval Latin verb affidare, meaning, to pledge. Moreover, the Latin term affidavit directly translates to “he or she has made a pledge.” The statement that an individual has sworn can be anything. It may be about his or her marriage, finances, residence, and others. And you would never know when an affidavit comes in handy. Aside from an affidavit for proof of identity, there may be other types of affidavits you will need later on. Here are some of them:

Affidavit of Name Change: Some people go by another identity during a major change in their lives, such as marriage or gender reassignment. Legally, these people can make changes in their first names, middle names, or last names, given that they undergo the right process and with proper documentation. Now, when an individual already has his name changed, an affidavit of name change will be beneficial for him to prove to a company or another person that he followed the legal process in changing his name. This document indicates the original or old name of the person and the new one.Affidavit of Heirship: When a person dies, he cannot take his properties with him. While most people—especially prominent ones—write a last will and testament, others die without preparing the said document. Now, when the probate court tries to determine who will inherit the property, there needs to be a written document that validates that an individual is a legal heir of the deceased. We refer to this written solemn oath as the affidavit of heirship. This document helps an individual assert his legal rights over the property of a family member who died.Financial Affidavit: Marriages don’t always result in happy endings. For this reason, couples who feel like their marriage is not working out will resort to divorce. In a divorce proceeding, both parties have to file a financial affidavit at some point. This sworn written statement verifies the financial status of the signer. Moreover, it gives detailed information about the affiant’s annual income, savings, and the things they own.Affidavit of Residence: This type of affidavit is useful in various situations, such as enrolling your child in a public school, applying for a driver’s license, and for business purposes. An affidavit of residency proves an individual’s address. This document should specify the deponent’s permanent address, current address, and the police station where the area of residence is covered.

As featured in an article from Proofpoint, a survey conducted by a cybersecurity and compliance company showed that more than 30% of the respondents in the United States had experienced identity theft. Moreover, the study revealed that the number is more than the global average. Regardless of where we are on earth, we must remain vigilant against these frauds to save ourselves from being part of the numbers. And in proving our identity, we also need to present proofs. Remember that your statement in the affidavit of identity would not be valid in the absence of the essential documents. Some of these are the following:

A state-issued driver’s license is an official card-like document, which gives permission to an individual to operate motor vehicles on the public road. Commonly, the details reflected on this document are the licensee’s full name, birthday, ID number, address, date of issue, signature, and photograph. Moreover, it may also have the type of vehicle the government allowed the licensee to operate. Since this document includes relevant personal information, some countries accept this as proof of identification.

Also referred to as a resident alien identification card, a green card is an identification card that allows a foreign national to live and work in the United States permanently legally. The U.S. Citizenship and Immigration Services issues a green card to an individual as proof that he or she already has an approval to reside in the country permanently. This card also includes several personal details, such as the person’s name, country of birth, date of birth, sex, and signature. It also has other important elements such as the bearer’s photo and thumbprint. Apart from the driver’s license, you can also present this document to the notary public.

Aside from the cards mentioned beforehand, a passport is also a valid document to present as proof of identity. In the United States, the Department of State issues the passport to the citizens of the country for international travels. This document includes a record of the bearer’s name, place of birth, date of birth, date of issuance, date of expiration, and passport number. When you opt to present a passport, make sure that it is still valid.

How to Write an Affidavit for Proof of Identity

Creating an affidavit for proof of identity or any type of affidavit can be a tedious task when it is your first time to write such document and you have no guidelines to follow. However, you don’t have to go search for places or open several websites to find the one that will teach you how to create the said affidavit. In this section, we have outlined a step-by-step guide you can follow.

Step 1: Start with the Basics

In writing any type of document, it is crucial to always start with the basics. Choose the font style you will use, set the margins, and make sure that there is adequate spacing between each line. After doing so, see to it that you input a title in your affidavit. This means that you have to specify what the statement is about as well as your name. Moreover, if the purpose of your affidavit is to submit it before a court, it would help if you include a case caption. This section should consist of the name of the court, country, state, the parties involved, and the case number.

Then, the next section of your affidavit should specify your personal information as the affiant. These details include your full name, age, occupation, residency, and citizenship. Other relevant information you may include in this section is your social security number and telephone number. Moreover, this statement should be in the first-person point of view.

Step 3: Compose a Statement of Truth

Another element of an affidavit is the statement of truth. This section enables you to swear and prove that you are telling the truth and the information you wrote in the affidavit are accurate. Just like the identity statement, this section should also be in first-person. In addition, you should again identify yourself as you acknowledge that you agree to state the truth and nothing else in the affidavit.

After writing the essential components of the affidavit, check the document and see to it that there are no errors present. Also, make sure that all the information you input in the document would match with the identification card or other document you present to the notary public. Before going to the notary public and have your document signed, prepare all the supporting documents like the identification cards you have to present. 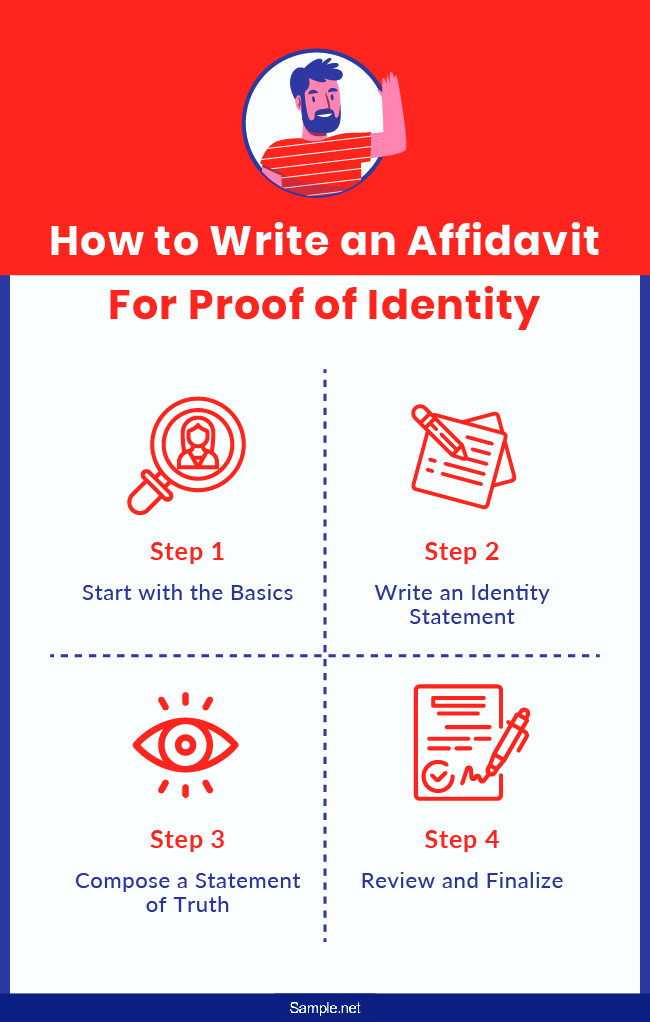 What is a non-identity affidavit?

Aside from the affidavit for proof of identity, there is also one type of affidavit that serves an opposite purpose of the said document. A non-identity affidavit is a sworn written statement claiming that some other person with the same name is not the affiant. It is specifically useful for cases of mistaken identities.

How do I notarize a document without an ID?

The person who files the affidavit should be the one to affix his or her signature on the document. However, bear in mind that for the affidavit to take full effect, the presence of a notary is important as the affiant signs the document. The state or the government gives authorization to the notary so that they could verify your signature for formal or legal documents. As previously mentioned, you need to present supporting documents to the notary before they allow you to sign the affidavit.

How would you feel when someone else pretends to be you? Stealing the things you worked hard for—your finances or worse, your reputation. In the United States, the most common identity theft complaints were due to credit card fraud. There were over 200 000 complaints filed for this type of theft during 2019. Asking for an affidavit as proof of identity is one of the ways of government agencies and private entities to combat this form of fraud and lessen the number of victims. If you think that creating an affidavit from scratch will be a hassle, you can make use of the printable templates and sample documents we have compiled in this article for you.