We often segregate ourselves as visual, verbal, or auditory learners. However, these distinctions may not be as mutually exclusive as we thought. Research says that a combination of ways in presenting information, especially visual and verbal styles, can better facilitate our capacity for understanding. It is true that diagrams and illustrations teach us what a thousand words could not. However, graphic organizers like Venn diagrams and charts prove that the combination of both words and pictures are a valuable aid to instruction. In fact, a Venn diagram best illustrates the similarities and differences of the various learning styles.

What Is a Venn Diagram?

How to Use the Venn Diagram

What do you call the center of a Venn diagram?

Why is it called a Venn diagram?

What is a Venn diagram in simple words?

What are the Venn diagram symbols?

What is the name of a three-circle Venn diagram?

How can I make a Venn diagram?

Can I make Venn diagrams in MS Excel?

What Is a Venn Diagram?

Venn diagrams do what diagrams do best: they communicate complex concepts through illustrations and caricatures. Processing thoughts through visualizing them is an effective learning strategy. Visual learning feels natural for many since we’ve been using our sense of sight to make critical connections and distinctions—between predator and prey, for example—to survive. Admittedly, it is easier for us to compare and contrast two objects when we arrange them based on their similarities and differences. Diagrams are a pictorial representation of the relationships of concepts with each other.

In its simplest form, a Venn diagram consists of two circles that overlap slightly on one side. One circle represents one concept. When you are comparing two concepts, then there will be two circles. In the non-overlapping area of the circle, the writer lists down the characteristics that are unique to either concept. Logically, one would interpret the overlapping region as something shared between the two circles. In that blank space, the writer can list down the traits common to both concepts. In some cases, especially in math, the two or more circles are enclosed in a rectangle.

The Venn diagram’s design is simple and straightforward. That makes it suitable for any situation where we feel we need to compare objects. In disciplines outside math and statistics, the following words may not be used as much. However, it is important to learn about these terminologies as they help us understand how a simple schematic of two or more intersecting circles can say a lot about the relationships of one thing with the other.

Set: A set is a group of items or elements. In math, sets are a collection of numbers enclosed in curly braces. Venn diagrams compare and contrast sets with each other. A set can also be the object to be compared.Union: In math, union refers to all the items inside all the sets in the Venn diagram. It is denoted by the symbol that looks like a wide letter u.Intersection: In a Venn diagram worksheet, the intersection refers to the region that overlapped. It can also be seen as the common characteristics shared between two or more sets.Symmetric Difference: On the other hand, the symmetric difference means all the independent regions of the overlapping circles. This refers to all the features or elements that are unique to both sets.Absolute Complement: The absolute complement of a set or object is that all elements in the diagram that does not belong to that said set or object. This describes all that said set or object is not.Relative Complement: The relative complement of a set is the characteristics that it doesn’t have. If we have set A and set B, the relative complement of set A are the characteristics that are unique to set B.

If there is a club for popular graphic organizers, the Venn diagram may be its leader. At least after it talked things through with the flow chart, which has a huge following, too. The two overlapping circles is a famous choice for organizing thoughts and illustrating relationships. But how did it achieve celebrity status?

You can say that it was not the only one of its kind. Its less refined ancestors appeared at different points in the history of the diagram, starting from the early 1200s when an academic used a similar illustration. More than 400 years later, a similar illustration reappeared in the works of scholars. Its closest ascendant is the Euler Diagram, made by the mathematician Leonhard Euler. You may be familiar with this Swiss mathematician’s legacy: the Euler’s constant. He was an influential figure in the world of mathematics. So much so that his diagrams were among the inspiration of logician John Venn in creating the Eulerian Circles. The latter was only later termed Venn diagram in a book on logic.

The diagram was born from Venn’s interest in logic and probability theory. He used diagrams to understand and demonstrate the nature and relationships of groups or sets. It also became a popular tool for academics and scholars in depicting relationships. This graphic organizer has built its reputation on its usefulness and versatility in logic and other disciplines. That is why it is one of the fundamental and foundational lessons kids learn in their early education all over the world.

Schools don’t just teach kids about Venn diagrams for the sake of tradition. One of the perks of its simplicity is that it is also a versatile tool for understanding and illustrating. You can build on the basic two-circle design and use five circles. You can also mix it up and play with the structure to effectively encapsulate information. There are different disciplines that benefit from the diagram’s versatility.

You can’t take away the diagram from logic and math. It is the brainchild of both academic disciplines. You can use the diagram to test, analyze, and present certain arguments and their relationship. You can use it to check if the argument is valid. In math, you can use the diagram to solve problems from simple to complex. Mathematics adheres to the use of specific terminologies, like sets, unions, and intersections. The discipline has a branch dedicated to the study of groups and their relationships. The branch is called set theory.

The Venn diagram is also useful in studying the outcomes of events. Statisticians look at how likely an event will occur based on its similarities with the previous event. With the help of the diagram, the likelihood of an event to occur can be predicted by adding individual probability.

A Venn diagram is a useful learning aid and instructional material. It can simplify a lengthy text into a simple graphical representation. It is also easier to learn when the information is digestible. Especially for young learners, it can be hard to follow through texts upon texts. Educators can demonstrate the relationship between concepts using the diagram. It also helps the students’ comprehension.

You can also use the diagram in business presentations. For instance, you are preparing a slide presentation about how your product can compete with the other brand’s item. Instead of filling your slide with words, you can illustrate your point with the diagram. It is useful in making comparisons in your reports.

How to Use the Venn Diagram

Whether you are a student or a professional, you can have different uses for the diagram. The following are some of the applications where a Venn diagram is appropriate.

The diagram depicts commonalities and differences between or among the objects compared. It makes sense that the basic use of Venn diagrams is to directly look at how one thing relates to another. You can use it to see the relationship for yourself or demonstrate the dynamics to others.

It is a graphical organizer, after all. You can use the diagram to organize ideas and thoughts. Maybe you need help in deciding which item to buy. Or you want to picture out how related a particular event is to a bigger situation. In whichever case,  you can decide how you will utilize the diagram.

Mathematicians can use the diagram in dealing with advanced problems. They can use it to inspect the logical relationships between sets. Engineers, academics, computer scientists, and statisticians all have found appropriate uses of the diagram in their fields of focus.

Venn diagrams are useful in evaluating categorical syllogism. You can visualize the given premises as a diagram. From inspecting the structure, you can determine whether the conclusion is valid or invalid. Sometimes the propositions give the answer away, but Venn diagrams can help you be sure. It helps you evaluate the logical problem fast, too. 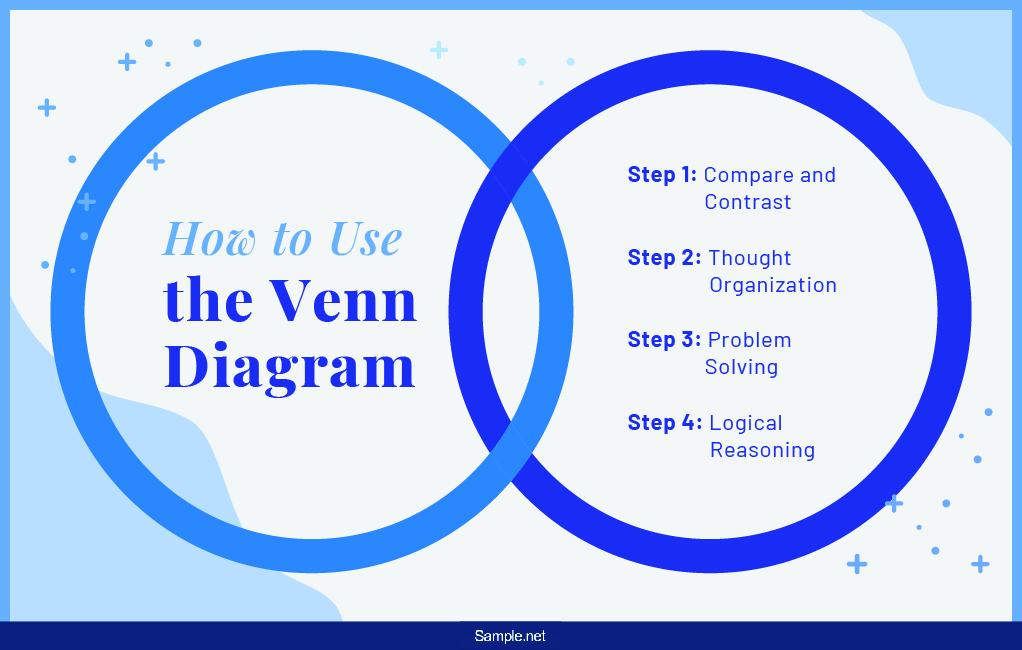 What do you call the center of a Venn diagram?

The region where the two or more circles intersect is called the intersection of the sets or intersection.

Why is it called a Venn diagram?

The diagram was named after the English logician, John Venn, who popularized it.

What is a Venn diagram in simple words?

It is a compare and contrast diagram with two or more intersecting circles. The non-overlapping region houses the unique traits of each object. The intersection shows what all the compared objects have in common.

What are the Venn diagram symbols?

What is the name of a three-circle Venn diagram?

It is called a three-circle Venn diagram. The intersection of the three circles is called a Reuleaux triangle.

How can I make a Venn diagram?

Draw two circles with one of each circle slightly overlapping the other. Label the overlap as similarities. Write the name of the two objects you are comparing on either circle. You can also download a printable template from the ones we prepared for you.

Can I make Venn diagrams in MS Excel?

Yes. You can find the diagram that you want in the SmartArt option. You can customize and edit the diagram so that it is appropriate for your needs.

Venn diagrams have gone a long way. From complicated mathematical problems to things like, ‘which canned drink should we buy,’ we have benefited from learning how to categorize choices to make our decisions. Diagrams make our life easy. They help us picture out information that is otherwise reflected in a lengthy paragraph. We also understand the relationships of ideas better when we illustrate them into the simple circles and lines of diagrams. Who knew something as simple as two circles that couldn’t overlap completely could be so versatile?