Despite the COVID-19 pandemic and the extensive protests regarding George Floyd’s death, the elections continue this 2020. So, the coming election holds a heavy influence on American voters. As of October 10, 2020, Statista reported that President Donald Trump already polled up to 42.1% in the race of becoming America’s next president. And there are more candidates to consider; nonetheless, we should all be responsible voters. But have you thought about how responsible people are at nominating candidates too? The presidential elections are not the only place where we can nominate as it works in a school or at work. And when you need to choose a candidate for any election or select an awardee, be sure to process it out with a nomination form.

What Is a Nomination Form?

The Elements of a Nomination Form

How to Prepare a Nomination Form

What are other ways to nominate?

What is the basic structure of an award nomination letter?

What Is a Nomination Form?

Nomination refers to the process of picking candidates for elections or bestowing honors and awards. And you can nominate people in different ways depending on the process’s nature or context. One way of nominating is by filling out a nomination form. This document identifies who to nominate in an election or award. Also, it notes the qualities or reasons why the nominee deserves to be nominated. Nominees eventually become official candidates if they meet the standards or criteria written in the form to acquire the said award or position. 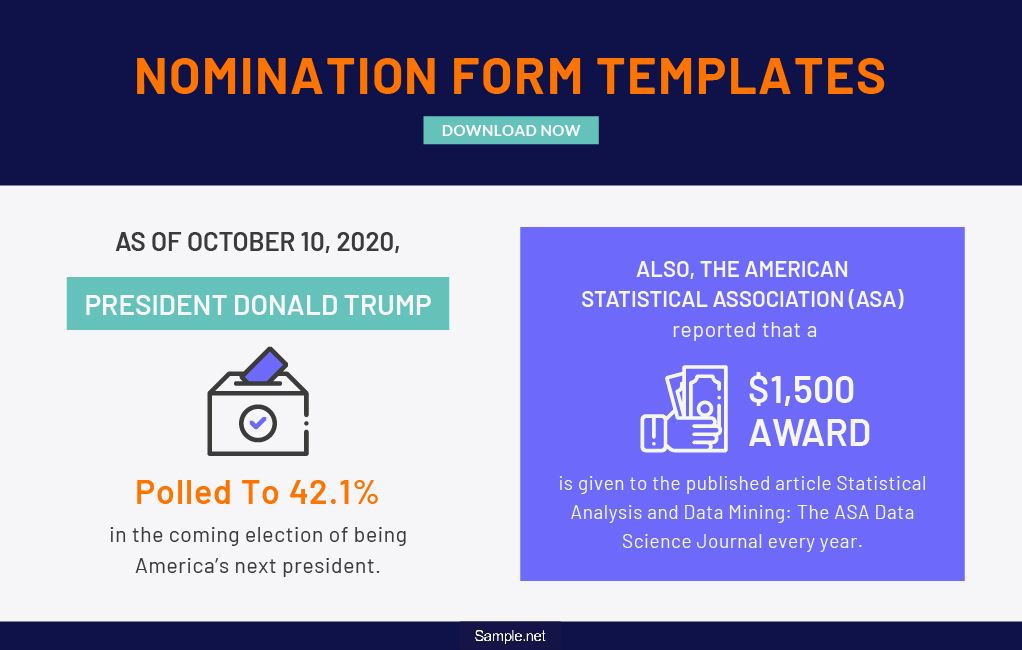 As of October 10, 2020, President Donald Trump polled to 42.1% in the coming election of being America’s next president.

Also, the American Statistical Association (ASA) reported that a $1,500 award is given to the published article Statistical Analysis and Data Mining: The ASA Data Science Journal every year.

Why Are Nomination Forms Important?

Nomination forms are essential for recognition purposes. For example, suppose you saw that one employee made most of the business contributions and has been doing the hardest compared to other co-workers. In that case, that person can finally be recognized as a nominee for employee of the year. The same goes for recognizing a politician’s outstanding works, which can qualify him or her to be a candidate in the next election. Not all nominees will place as official candidates, though, since there are standards involved. Lists will be narrowed down for the final candidates. And those in charge of the nominations will investigate if the statements inside the forms are true or not.

Also, nominations apply to various functions. Besides nominating someone for a general election in public office, you can also nominate someone for a job opportunity. You can even nominate who deserves certain honors from small awards down to prestigious ones like The Grammys, The Academy Awards, and The Nobel Prize. Most importantly, nomination forms are the foundation of the elections or voting processes. You cannot vote without nominated candidates in the first place. Thus, a declaration for nominees is crucial until you have a set of candidates to choose from and vote for.

The Elements of a Nomination Form

Have you ever wondered what inside nomination forms are? We got you covered as we will introduce you to the different elements of a nomination form. And when you make the form afterward, be sure the factors listed here are present as they make up a standard nomination form. Without further ado, here are the said elements:

Title: Every nomination form should have the “Nomination Form” label for the title. Otherwise, people would still need to guess what the document’s function or purpose is. The title can still be specified further if the nomination sheet refers to nominating awards or nominating for elections. And the title should be visible enough, most likely, in bold capital letters.Type of Award or Position: While the title is already clear, you have to further expound the form by identifying the type of award or position involved. Take a movie award nomination, for example. Is the person listed in the sheet nominated for the best actor, supporting actor, or perhaps, director? Note it down. And in the context of student council nomination, identify the type of position from the student body president, vice president, secretary, etc. In most cases, the form has choices prepared for each type.Nominee Information: Who is being nominated in the first place? Name him or her. If the nominees refer to a group or committee, then state their names individually. The nominee’s legal name, contact number, email address, and address are required. And the goal of this step is to ensure whoever reads the form knows your nominee’s basic details.Reason for Nomination: Indeed, the nominee’s basic info is expected. But the most important part of any nomination form is the reason for nominating your candidate. Remember, do not just state that the nominee is outstanding—prove your point. Explain why your nominee deserves the award or position in this part. And it would help if you only mentioned the facts because fake reasons lead to automatic rejection. Also, use relevant reasons for being nominated. Titles or achievements not related to the nomination are useless.Nominator’s Information: A person who nominates is called a nominator. And besides identifying the nominee’s details, the nominator’s info should also be addressed from the name, address, and contact details. As a nominator, it is essential to prove your credibility too. Otherwise, how can people know that many people nominated a particular candidate without identifying who were the ones that nominated the said candidate?Comments: Although the “Comments” section is optional, there are many nomination forms that add them. That section is a blank space where you can jot down any additional relevant information. Maybe you like to attach files that prove how the nominee belongs to a significant club or organization. Others even add photos and links as evidence that a nominee went through special training, seminar, and other achievements. What to add here is up to the nominator.

How to Prepare a Nomination Form

You already know the nomination form’s definition, significance, and elements. Now for the main course of the article, do you know how to make a nomination form? Rest assured that it will be easy since we have prepared sample nomination form templates to download, edit, and print. You only need to fill out the template instead of starting from the beginning. And to ensure the results are splendid, it would be best to follow these five simple steps on how to prepare a nomination form:

Step 1: Tailor the Nomination Form to Your Purpose

Are you setting a nomination form specifically for elections or awards purposes? And in what context is it? Finalize that until you would know what to present in the form. First things first, select the template of your choice and layout its details. So if you visualized a nomination form for electing the new leaders of a summer camp, then the details tailored in the form must be related to the summer camp leader elections. Relevance is the key. Already clear with your goal? Proceed to insert the title and a brief introductory statement in the form.

Besides the title, you already know that there are still many elements of a nomination form, as discussed earlier. Be sure to insert them in the form individually to complete your nomination sheet. Leave extra spaces after every element because nominators or anyone who would fill out the document will still need to write the type of position or award, nominee information, and so forth. So, the elements help in categorizing the form so it will not be confusing to use.

Step 3: Arrange the Format and Organization

Do not forget to mind the nomination form’s format. Arrange accordingly by setting your preferred layout, design, margin, font size, font style, etc. And focus on arranging because it is essential for any document. Maybe you just enumerated every element in the sheet without any sense of organization. In presenting every info, observe a smooth flow too. Find a way where the information listed sounds natural and in the right sequence, rather than a messy collaboration of details.

Make sure that anyone who uses the sheet would find no hassle in filling the details. With that, include clear directions so anyone would know how to complete the form. Also, use words that are understandable for the general public. There is no need to use poetic or difficult vocabulary as not everyone might understand it; thus, making the form more difficult. You do not even have to write complete sentences all the time since you can add tables, charts, photos, and other visual organizers for an easy-to-follow output.

Never forget to incorporate the standards and special instructions in the nomination form. You can provide a list of instructions regarding what should be done first down to the submission process. More so, mention the standards and criteria about what makes a nominee qualified to be nominated. That way, it will be clear for nominators if who they have chosen as a nominee can pass the standards. Whatever it is that nominators should know before submitting the form, note them. And once you are confident with the sheet’s outcome, produce your nomination forms.

Nominees earn praise, trophies, and money, especially if they win. But that depends on the context because some rewards only give out trophies like in TV award shows. There are some cases where the money is involved, like how ASA got awarded $1,500 yearly with their article Statistical Analysis and Data Mining: The ASA Data Science Journal. Nevertheless, giving money to nominees or not depends on the standards and regulations set in a nomination.

What are other ways to nominate?

Besides using nomination forms, there are different ways to nominate people. Examples include self-announcements, conventions, petitions, assemblies, and nomination letters.

What is the basic structure of an award nomination letter?

In award nomination letters, three major elements make up its structure. They consist of the opening statement, supporting or background statement, and the closing statement. And following its pattern enables you to convey the right message effectively.

All in all, nominating someone for positions and awards is a huge responsibility for every nominator. Nominators will even provide concrete evidence of why certain nominees deserve to be recognized in a nomination form. As someone who prepares nomination documents, be responsible too. Ensure that nominators will not have a hard time completing the sheet and that everyone who reads the form can easily understand its content. And you can make it happen beginning with a few clicks to download our sample nomination form templates.