Hoodies have become a staple in today’s fashion. From Mark Zuckerberg to Eminem, we see big celebrities and personalities, men and women alike, wear hoodies as a form of fashion. From the streets to movie posters, they are seen everywhere! Snuggly, comfy, and warm, we wear them for multiple reasons. Hoodies of various designs and colors have sprung out of nowhere: crop top hoodies, hoodies that look like t-shirts, zipped hoodies, black, grey, or white ones. Take a look at our blank printable hoodie designs made just for you. And today, let’s dive deep into the world of hoodies.

50+ Sample Hoodie Templates & MockupsWhen did the Hoodie Fashion Start?Is It a Hoodie, Parka, Jacket, or Sweater?Did You Know That…?Trayvon Martin and His Dark HoodHow Do You Design a Hoodie that Doesn’t Disappoint?

When did the Hoodie Fashion Start?

You won’t see anyone not owning at least one or two hoodies. Even you, perhaps, have a hoodie in your wardrobe! Because honestly, who doesn’t like hoodies? It’s our go-to fashion when we want to feel warmer. Sometimes, hoodies don’t even serve its original purpose of warming you up anymore. It has become a fashion item for dancers, athletes, or celebrities. You’d see the likes of Chachi Gonzales wearing them during dance practice and the Jabbawockeez during dance competitions. But what, exactly, is the origin of hoodies?

According to CNN, hoodies were initially worn by monks and scholars in the medieval times. Hoods called “cowls” were attached to a tunic or garment and initially served as a way to conceal their identities. They were also worn by farmers to protect themselves from the weather.

Then, around the 1920s and 1930s, the brand Champion (then The Knickerbocker Knitting Company) signed a deal with The University of Michigan to create uniforms for their sports teams. They crossed a hood and a sweatshirt and BOOM–the hoodie was born!

Soon after, Ted Kaczynski came into being. He was one of the most infamous genius criminals in the United States. Having lived a secluded life in the mountains, the FBI spent nearly two decades to track him down. He was a prodigy who put the police force in a dilemma. His police sketch showed a man wearing aviator glasses and a hooded sweatshirt. For the first time in history, the hoodie was associated with crime and violence.

From then on, the meaning of hoodies has evolved. One historical event was the shooting of young Trayvon Martin. Wearing a dark hoodie, he was described as a “suspicious” individual and got shot. Many people wore hoodies as a cry for Trayvon Martin’s justice.

But hoodies are not only associated with violence. Today, we see rich personalities wearing simplistic fashion. Mark Zuckerberg, the creator of Facebook, is a name that’s already synonymous with hoodies. From Money Heist to Billie Eilish, hoodies became accessible across all corners of the world.

Is It a Hoodie, Parka, Jacket, or Sweater?

People often interchange these body-warmers. And it’s sometimes confusing because they all look the same. But, seriously, who cares? Whatever is the design, whether it’s a unicorn or a butterfly, what does it matter if you’re wearing a jacket or a sweater? These clothes, however, have a difference when it comes to design and purpose.

Parkas, also known as Anoraks, are generally long coats that extend to the knees. They are thick coats with hoods lined with faux fur or authentic fur. It was made initially with Caribou hide, and its purpose was to protect you from harsh winter conditions. Today, people can now make parkas using lighter material to suit anyone living in any part of the world. Jackets, on the other hand, are short upper garments, that are either hooded or not hooded. Their purpose can vary from fashion (e.g., bomber, leather) to weather protection (e.g., windbreaker). When a jacket becomes sleeveless, it becomes a vest. One thing to remember is that jackets and parkas are almost the same, except one is shorter than the other.

If you prefer something warmer, you can go to sweaters. Sweaters are much milder in general due to the material used in making them. They are usually knitted and are heavier than jackets. If you want to go for that “mysterious” vibe, then the hoodie is the perfect go-to outfit. It is made of light material and can be worn fashionably. Jacket. Parka. Sweater. Hoodie. They all exist to serve one purpose: to protect us from the cold. But it doesn’t hurt to know the difference. Let’s all agree to disagree that the best way to avoid confusion would be to find the difference. 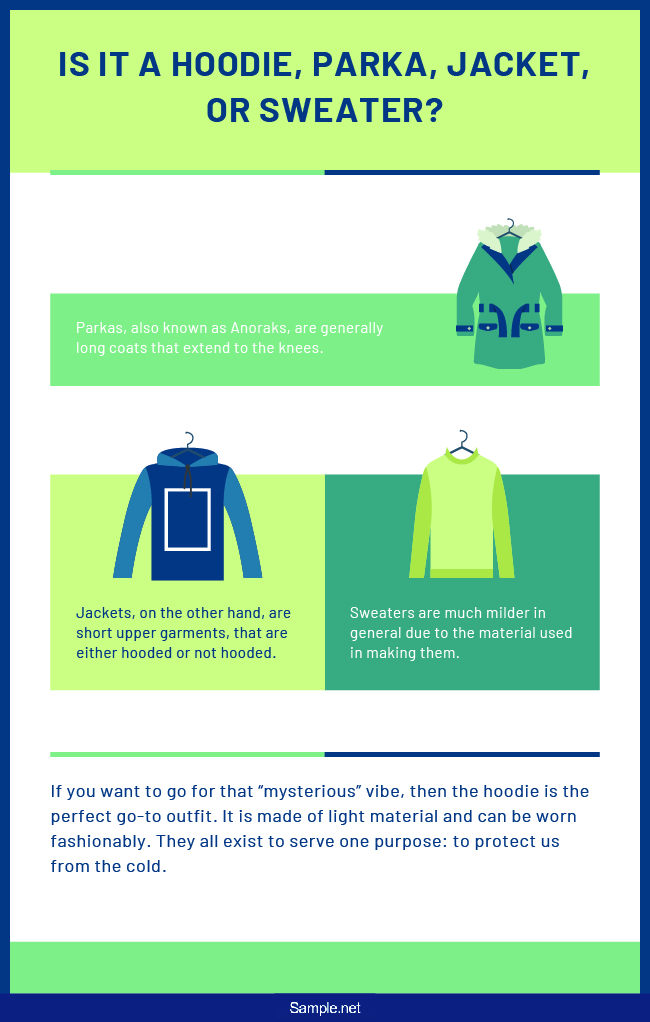 Did You Know That…?

When someone asks you what a hoodie is, you’d automatically describe it as something light, comfy, slightly warm, and has a hood. But did you know that there’s more than just one type of hoodie?

Baja Hoodie. Also known as “Drug Rugs,” Baja Hoodies originated from Mexico. These Mexican jackets used to be made of hemp, but now they can be made out of other materials such as wool and polyester. They are usually designed with horizontal and vertical patterns, have large sleeves, and one big pocket out front. Baja hoodies are popular among hippies and surfers. Back in the day, surfers used to buy these Mexican jackets from Baja California and are associated with illegal drugs, thus the name.Designer Hoodie. Designer hoodies are hoodies made by famous brands like Louis Vuitton, Gucci, Balenciaga, etc. They’re just like your everyday hoodie but more expensive and would cost us, peasants, a kidney or two.Skate Hoodie. Hoodies are warm and comfortable. Yet, sometimes, they are a bit heavy and might restrict your movements. And that’s why fashion designers invented the skate hoodies! They are cool sans the extra weight and restriction! They are designed specifically for skaters, skiers, and even training athletes. They can either be with or without sleeves.Pullover Hoodie/Pullovers. Want a hooded sweater? Choose pullover! They’re usually zip-less, and you can wear them if you’re in a hurry! A well-known personality who wears hoodies whatever the occasion is (whether it’s a conference or an Instagram marketing proposal meeting) is Mark Zuckerberg.Bodysuit Hoodie. It’s a bodysuit that has a hood, plain and simple. People usually wear them as a costume rather than a casual outfit.

Hoodies have become famous throughout history, and even more so with the emergence of Netflix’s hit series “Money Heist” and the rising popularity of Billie Eilish. The hoodie is a fashion item that will definitely still be around for the next few decades.

Trayvon Martin and His Dark Hood

The year was 2002. 17-year-old Trayvon Martin was walking down the street when he was fatally shot by someone named George Zimmerman. The reason? He looks suspicious with his dark hoodie.

George Zimmerman was sitting in his SUV when he called 911 to report a “suspicious” person wearing a “dark hoodie.” He was instructed to stay inside or not go anywhere near the individual. However, Zimmerman disobeys orders and confronts the man instead, after which, Trayvon Martin was shot dead.

Since then, many people started wearing a hoodie as a way of crying for justice for the death of Trayvon Martin and the persecution of George Zimmerman. It became a movement so significant there were “hoodie marches” made as awareness of how people often get marked as “suspicious” just because of a hoodie. Biographies were also made out of his story. Many people also argue that it was not the outfit, but ethnicity. It was, according to many, a case of racial profiling.

Perhaps it is in the characteristic of a hoodie to naturally conceal someone’s identity or isolate them from the rest of the world that made it synonymous with violence. Though understandably, Zimmerman was only vigilant as captain of the neighborhood watch, it’s still another thing to carry a gun around whether or not you’re trying to perform your duty. Hoodies are only a piece of clothing and should not have any negative connotation to them.

How Do You Design a Hoodie that Doesn’t Disappoint?

Too tight or too loose? Too warm or too cold? It’s hard to pick the right hoodie when there are so many available in the market! But worry no more. The main reason why anyone wears a hoodie at all is it’s simple and comfortable to wear. You could wear it over a t-shirt and go about your day. However, if you want to take it to the next level and find other creative ways to wear a hoodie, then look no further, for the masters of hoodie fashion are here, and we will dish out the best ways to design a hoodie for you.

Step 1: Design for Style but Also for Comfort

Let’s face it. Your gym clothes are more comfortable to wear than the rest of your wardrobe. And they are easier to wear too. These days, the athletic outfit has evolved from just being functional outfits to being fashion statements. People wear athletic outfits for reasons more than just hitting the gym. For an athleisure look, you can pair up a slim-fit hoodie with skinny jeans and trainers, and you can look fashionable as ever. For instance, you can take your height into consideration, among other factors. Make sure that they match a person’s arm length. Though it looks cute, choosing a hoodie whose arm length exceeds the beginning of your thumb will only make a short person look shorter.

A person’s size also matters when it comes to wearing hoodies. You don’t want to give potential buyers a size that makes them appear too thin or too large in. Slim-fit hoodies would look good on slim and bulky people. For plump ones, hoodies that are one or two sizes bigger would actually do the opposite of disguising your weight. So it’s usually a matter of selecting the right wardrobe than weight-loss most of the time, and that’s what you should remember in the design process.

You’ve seen it. Kendall Jenner and Michael B. Jordan wearing hoodies under their leather jackets, and they are killing it. Who would’ve thought a hoodie would look good under a leather jacket? With that kind of getup, you can make a person look smarter while still looking casual. As a bonus, it’s something that they can wear on-the-go from an annual marketing plan meeting to a posh party.

Step  4: Be Conscious of the Overall Design

All-black or all-white, the one who wears a hoodie would definitely look cool if they pair it up with pants and shoes of the same color. You can also make them pull off this look with sweatshirts, just like Marshmello and whoever is the latest hoodie trendsetter. Different hoodies project different images. Zip-up hoodies make a person look outgoing. Pullovers would make you look casual and smart. Think of how you want to project your brand before finalizing the design. 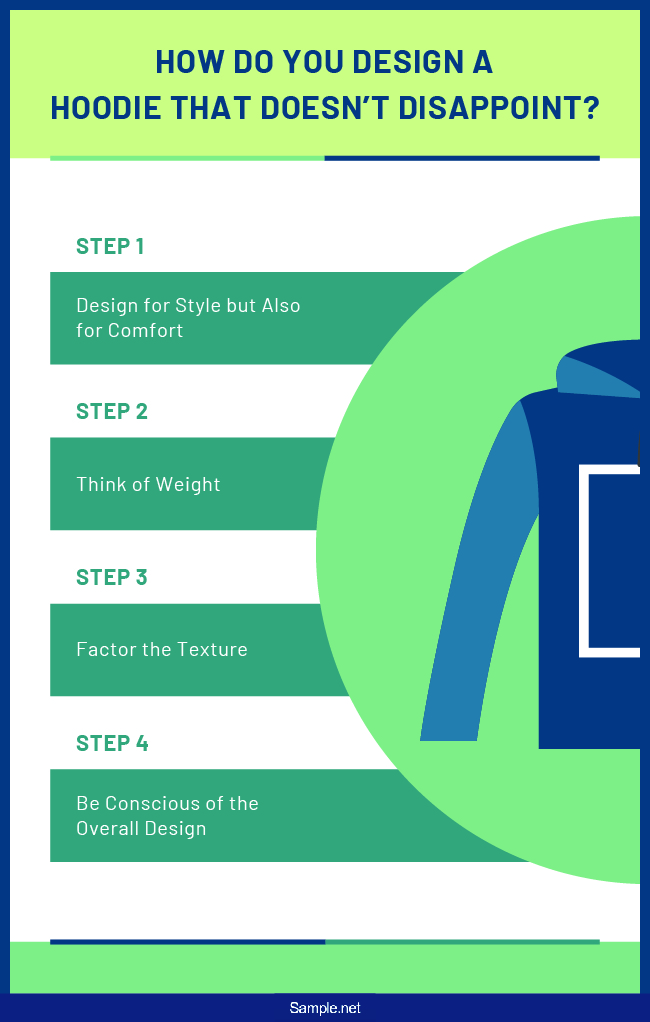 Over time, the purpose of hoodies has evolved and will keep changing. Originally used as protection from the weather, people now use them as a part of a fashion statement. So whatever the reason is, whether people are wearing a nightgown or a bikini, designing a hoodie that sells great is all about making a person stand out. Your design should then let them bring their image across. Because, according to Carly Cushnie and Michelle Ochs, “Life’s too short to wear boring clothes.”