Balance is a vital decision-making element. Whether it may be in personal struggles of everyday business matters, finding equilibrium in every decision requires you to take a harder look and assess the situation. When you need to come up with a conclusion, it should result in the better without compromising your resources or current status. A cost-benefit analysis is a significant tool in weighing decisions that produce outcomes with manageable costs and profitable results.

What Is a Cost-Benefit Analysis?

The Real-Life Application of Cost-Benefit Analysis

How to Do a Cost-Benefit Analysis

What are the cost types?

What are the costing methods?

What’s the difference between cost-benefit analysis and cost-effectiveness analysis?

What Is a Cost-Benefit Analysis?

A cost-benefit analysis (CBA) is a method that sums the benefits of an action or situation and subtracts it from the costs of the benefits. In the most basic sense, it identifies the benefits of a decision and compares it with how much that decision may cost. This helps weigh whether or not the benefits can justify the cost and help a business decide if they’re going to pursue a project plan or a venture. The results from the analysis will aid in providing a concrete conclusion if action is feasible or not.

Discussions can come with conflicts and differences in views and opinions. CBA is an important tool because it diminishes the influence of bias in the organization. It provides concrete evidence of the analysis of the ideas on the agenda so every member can collectively decide based on the calculations.

A CBA purpose is not only to determine whether or not a project is feasible as the benefits outweigh the costs. It also serves as the basis when determining which projects are more profitable and worth pursuing. It evaluates offers and presents solutions through its formula and provides an equation that the organization can use as their reference.

The CBA covers a wide variety of decision-making circumstances that ranges from simple material bidding to huge development matters. There are different types of CBA in different situations. They are as follows:

Benefit-Cost Ratio A benefit-cost ratio is the most common process of calculating a BCA. It involves summing up all the benefits of an action or the project throughout its operations and dividing it with its total cost. This can involve both short term or long term projects. As an example, if a real estate developer is building a rental establishment, he or she is going to calculate its gains for the next 25 years against its founding cost by considering both financial and soft profits.Incremental Benefit-Cost Ratio The incremental benefit-cost ratio is used to compare a project’s feasibility with another project. It calculates the benefits and losses of different options and alternatives in order to gain an informed decision. The process involving this kind of CBA usually starts by making a list of projects from most down to the least expensive in cost. They set a target incremental BCR and calculate each individual of each project. Whichever results to a higher amount of BCR compared to the incremental BCR is discarded from the list. This method is typically used in business settings to narrow down their options of which action or decision to take.Net Present Value Because the BCA often takes the future into consideration, businesses do not only consider the benefits of the present but also what the changes would be in the long run. This uncertainty leads investors, developers, or project managers to consider the net present value of the project. This means that a project with a higher NPV is preferred more than those that have less NPV. In calculating these types of BCR, it includes the long term benefits against the long term cost (e.g., maintenance, operational expenses, etc.) and the expected life span of the project.Payback Period The calculations are not done when the project comes to life. The BCA can also be used when monitoring the project’s benefits over the course of its operations. During the payback period, the benefits are constantly calculated until it finally surpasses the costs with the use of a spreadsheet or supervising tool. The profits accumulated after the payback period will now be computed as the net benefit of the project. This might take a long while to see, but it’s worth the wait when you see an action end in success after a grueling planning period. 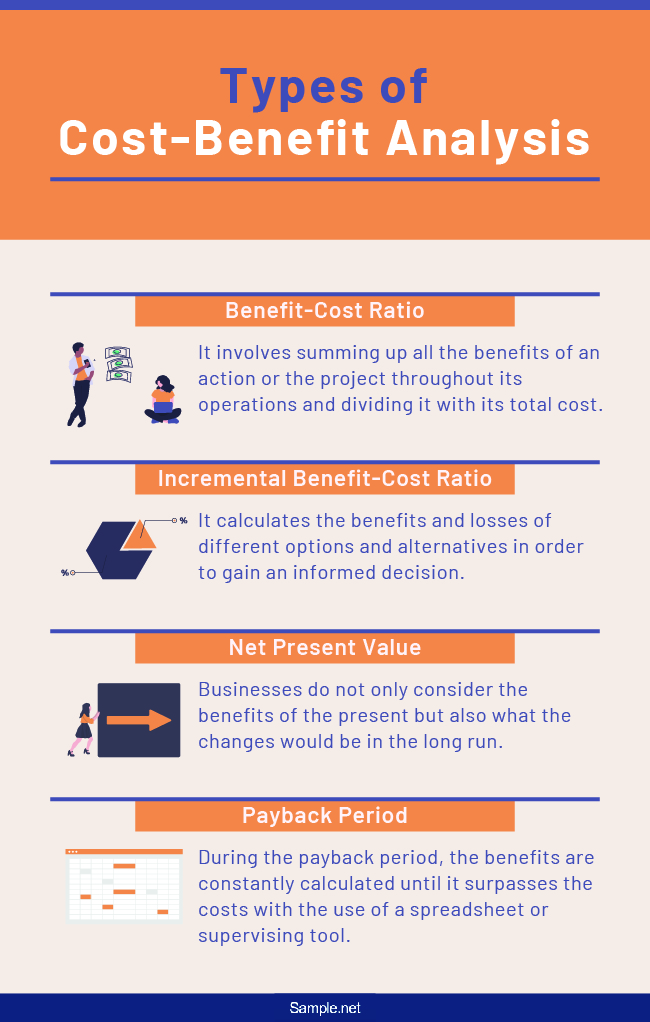 The Real-Life Application of Cost-Benefit Analysis

If you have a choice between having free coffee at home and going to Starbucks for a frappuccino, which would you choose? If you’re short on budget, you might opt to enjoy the comforts of your home and make the coffee yourself. However, if you want to take a stroll outside and enjoy a coffee shop’s ambiance, surely a five-dollar cup wouldn’t hurt. The end result lies on which benefit matters to you the most.

Unknowingly, the concept of CBA governs your everyday decisions. From grocery list choices to deciding what university to apply to, people tend to automatically measure if the benefit can outmatch the gain before laying a decision. It’s even used to calculate someone’s life worth.

In 2003, the Environmental Protection Agency (EPA) received backlash when their CBA results for a clean-air proposal showed that a person’s life before 70 is worth $3.7 million while those that are aged 70 beyond are only valued at $2.3 million. When the EPA administrator, Christie Whitman, was asked about the figures, she dismissed the numbers and said that all Americans are equal.

Whitman’s political response dismayed the analysts at EPA. Although putting a price on a person’s number doesn’t sound ideal, the researchers were disappointed that their work was all for naught. The research was a move to determine the benefits of President George Bush’s Clear Skies proposal. The outcome was a result of a thorough statistical review on how much people are willing to pay for their health and safety, and those that are above 70 chose to pay less than people younger their age.

EPA’s complex CBA might be unconventional to many, but it shows that the method works in various ways, not just in business. And it actually works. The CBA can be a prime solution to every day’s decision-making dilemmas.

How to Do a Cost-Benefit Analysis

The word “analysis” might denote a tone of intimidation and might suggest a strenuous activity, but it’s actually not. That’s why it’s not only applicable in business situations, but it’s also a good method when making personal decisions. Follow the simple steps below on how to do a CBA easily:

The beginning of CBA making is to discuss its prime elements—the cost and the benefits. Take a hard look at a suggested action or a plan report and analyze what costs it might entail when you decide to pursue the course. It might include funds for production, human resources, shipments, and other materials. Check the possibilities of unexpected needs and include them on your list. You might also need to identify whether there’s a need for on-going expenses. Then, examine the projected benefits of the project. Discuss the rate of the return of investment (ROI) and how the profit may grow in the long run.

Every project requires spending. That’s why funds are necessary for pursuing any entrepreneurial aspirations. When it comes to business there are two kinds of costs: the tangible and the intangible costs. The tangible costs require monetary investments such as project materials, labor, operational expenditures, and taxes. On the other hand, intangible costs are those that don’t demand money. An example of this is time, energy, and exposure to risk. After identifying every price, classify them properly according to their corresponding category. Assign a monetary value to tangible costs, so it’s easier to calculate them for the results.

Determining an action’s results is not as easy as identifying its costs. The need for materials and other resources is definite and is available in a business plan. It’s also one of the things that need to be arranged even before it’s presentation. There’s no direct way to determine a venture’s benefits unless it’s already on the market. This needs thorough marketing research and other analysis to come up with a sound prediction of a new product or service’s revenue when released. Just like the costs, not all benefits entail monetary equivalent. Positive environmental impact, client comfort, and culture promotion are some of the soft or intangible benefits that your project can have. Label them with monetary value as well.

This is the peak of the process. After a thorough identification and classification of your costs and benefits, it’s time to determine whether or not the plan is attainable and worth your organization’s efforts. The basic formula for a CBA is to compute the total sum of your benefits and divide it against your costs and find out whether or not you gain a positive revenue. Of course, the formula may vary depending on what action you plan to take. For example, if it takes a decade before a definite benefit can be recorded, you can make use of market research and assume a probable gain for the next years.

What are the cost types?

The different cost types include the following: 1. Direct costs – costs that are directly related to a project such as materials and labor costs. 2. Indirect costs – costs that may not be directly involved in the project but still necessary, such as utility and electricity payments. 3. Intangible costs – those that don’t involve monetary funds such as environmental challenges. 4. Alternative costs – those that o through the option of whether or not it’s more efficient to buy or build it.

What are the costing methods?

The following are the different methods of costing: 1. Job Costing – the costs are divided into their respective jobs or projects. 2. Contract Costing – it’s similar to job costing, but contract costing is applied when a project’s timeline is set for a long time where there are separate costing for different contracts. 3. Batch Costing – this method separates costings by different batches or small orders where each of them is labeled as a unit cost. 4. Operation Costing – this is applicable for industries that do mass production of the same goods where there are pre-finished products in store for later use or exclusive orders (e.g., automotive parts). 5. Process Costing – costing is separated into the different stages of production. 6. Unit Costing – this is applicable to industries that produce or manufacture identical units continuously (e.g., mines and cement production). 7. Operating Costs – this calculates the operating costs of industries that provide services. 8. Multiple Costing – this is also known as composite costing where you combine two or more methods above for sectors that have mixed operations.

What’s the difference between cost-benefit analysis and cost-effectiveness analysis?

Cost-benefit analysis is the method of calculating an action’s benefits and comparing it with costs to determine its feasibility. On the other hand, a cost-effectiveness analysis is used when a CBA isn’t applicable because the result has no value. This is commonly used in assessing health care decisions because the effectiveness of treatment varies for every individual.

Successful results are rooted in wise decision-making. They say it takes a great intuition to know which path to take. That’s luck, and that’s rare. If you want to win every time, you need a strategy. Apply the basic principles of cost-benefit analysis, and instead of thanking your stars for your success, you’d be grateful for your efforts.