Harmony roots itself in understanding. When two parties realize each other’s differences and recognize that they both possess the potential to benefit one another in their own distinct ways, a connection is established. This is true to personal relationships, group partnerships, and business agreements. Lone navigation can only get you further, but participating in alliances can contribute significantly to your success. A memorandum of understanding makes this pact official. Learn more about this by continuing down below.

While not legally binding, a memorandum of understanding (MOU) signals that both parties are geared towards setting up a contract. It is a concise written agreement among companies and organizations. It presents an outline of scopes, limitations, and restrictions that they’ve agreed upon. It can also be seen as a preliminary document that can be later on added or expanded on a contract. This ensures that both parties know their responsibilities towards each other, the benefits they’re entitled to get, and the risks they’ll share.

Thriving in business is hard enough on your own, and bringing in someone to do it with you can be daunting. While it’s certainly helpful and beneficial, the obligation it entails can be a burden, but why are collaborations important?

Collaborations are a trend among business giants in the industry. You know why? Because brand partnerships work. A prime example of this is Kanye West and Adidas’s collaboration on Yeezy that resulted in a billion success. With Adidas’s popular standing in the market and West’s promotional genius, the figures were no surprise. When two notable brands merge to fulfill an initiative, they are not only bringing their resources and expertise to the table. They bring both their audiences, doubling the population size of their target market, therefore increasing the chances of a boost in profit.

Before stepping up to agree with a contract, an MOU can be a good stepping stone to take up. It allows you to sit for an initial discussion, settle your differences, and come up with a common goal without the weight of a legal obligation hanging around your neck. This is a huge help, especially for those who are new in business who haven’t explored the complexities of a partnership. 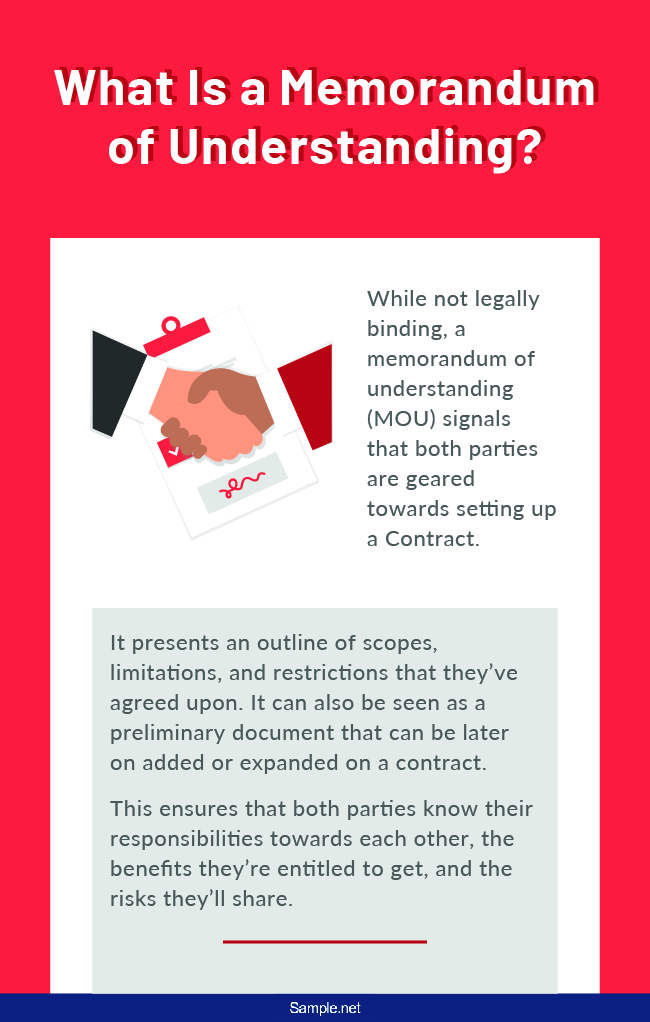 An MOU varies in different settings and arrangements. In many ways, it’s similar to a letter of intent, which may also a non-binding agreement that may also signal that a contract signing is already around the corner. But an MOU contains elements that are vital to its content. Below are some general information necessary to an MOU:

1. Time period – your MOU should state the start and end dates of a deed or project.

2. Risks – this answers what responsibilities each party will shoulder in the event where a hazard or a violation occurs. This should name specific roles or individuals.

3. Financial arrangements – this states how the payment works and who is responsible for them.

4. Responsibilities – this part is the main highlight of any MOU. This contains individual and shared responsibilities of every party involved in the agreement in detail.

5. Involved parties – it’s vital to name not only the organization labels but also the individuals who have direct roles to fulfill the MOU.

6. Disclaimer – If there are any reservations or reminders that the agreement might like to add, placing a separate paragraph for the disclaimers is necessary.

7. Signatures – an MOU might night legally binding, but a signature is needed to signify that everyone has read and understood the contents.

In an incident dubbed by The Guardian as the “memo of misunderstanding,” a televised international trade talk involving China and United State’s representatives and attended by President Donald Trump himself was interrupted by a disagreement. Trump had a slight argument with his trade negotiator, Robert Lighthizer, over the definition of MOU. Trump said that MOUs mean nothing which Lighthizer contested by saying that an MOU is also a contract. Trump contradicted Lighthizer, and the pair went back and forth until they decided to change its name to trade agreement.

The MOU’s unbounded nature might make it seem like a “negotiated promise” rather than an airtight understanding between two parties. The president’s disapproval of it can also be a factor. However, there are still numerous reasons why an MOU is useful. They are as follows:

Clears Up Uncertainties Before going into a formal contract, both parties can have reservations and points that they want to air and address. The start of every joint agreement is always the hardest, and disagreements raised over a signed contract can be distressing for everyone involved. The MOU lays the groundwork and assures that everyone is on the same page. This clears up uncertainties and helps the transition to a more significant contract easier to manage.Sets Up a Common Ground It’s only natural that two different parties vary in perspective and objective. The key is to not let these differences become a barrier to their dealing, but to turn it into opportunities that they can both share. An MOU’s terms can help establish a common ground where the parties can meet and work effectively.Provides Efficient Future Reference Because you have already laid out terms and conditions over an MOU, it could serve as a great reference for future contracts. Drafting a contract takes a great deal of effort and considerations because it entails legal responsibilities. Having an MOU can be a relief. This allows you to refer to your past dealings and identify which clauses worked best for you and your partner and which ones didn’t. Offers Convenient Termination One of the hardest challenges of being in a partnership is how to end it. When you’ve reached a point where you feel like your objectives don’t exactly align with your partner’s, or you feel like there’s no need to be tied in any organization anymore, an MOU provides an easy way out. A contract termination subjects you to a long, tedious, and costly process. Because an MOU is unbounded, the exit door is not that hard to open.

Getting into a new alliance can intimidating. But sitting down with your partners to discuss its contents may require tedious decision making. However, getting all of them on paper is no easy task. A single error on your MOU can mean serious complications in the future. Follow the guidelines on how you efficiently put your MOU together:

Before you can come up with a full transcript of your memorandum, it’s best to review every main point that both parties have agreed to heed. To effectively relay accurate details, you can start by listing down the points as phrases. From there, you can start filling in the necessary specifications by using bullets or numbered paragraphs, whichever you prefer. It is important to note that the details are laid out clearly and thoroughly to avoid misunderstandings that automatically defeat the purpose of the document. No matter how detail-oriented you can get, strive to present your points as concise and simple as possible. Remember: lengthy doesn’t equate being meticulous.

Aside from the main body of the MOU, you should know what other details it needs. This way, you’ll be able to easily make your draft without missing anything crucial to the agreement. With that in mind, you must first and foremost include the parties involved. Your MOU should not only clearly state the name of an organization but the key persons who are directly responsible for the items provided in the agreement. There should be a background context of the agreement’s purpose as well as a perceived outcome when the MOU is implemented. The responsibilities to be performed should be labeled and designated correctly. These details are crucial in ensuring that no complications will arise in the future.

While it’s clear that an MOU doesn’t have legal enforcement, some points can be binding unintentionally. This depends on how you’ve written your terms. Without meaning to, your agreement content may have statements that have legal weight. To help you avoid that, below are some points that might help identify which part may make your MOU legally binding:

1. When there’s a non-disclosure clause or confidentiality clause involved, it is often stated in a way that makes it legally binding.

2. When it includes significant details about payment, organizational roles, delivery of services, or corresponding consequences when there’s a violation.

3. When there’s a parallel agreement, and a clause present in the MOU also appears in another agreement that’s legally binding,

4. When there’s no statement specifying that any legally binding is merely unintentional.

Boilerplate clauses or miscellaneous provisions are those that are located at the very end of every contract or agreement. They contain statements such as instances where the document may become invalid, or on what jurisdiction does it belong to. Because they’re at the end and are usually phrased in standard language, it’s often overlooked. However, a boilerplate clause is important and shouldn’t be taken for granted. In the case of MOUs, it may contain amendments, counterparts, and notices that are necessary for dealing with future conflicts or changes in the document.

Amelia Earhart, the first woman to fly solo across the Atlantic Ocean, might have navigated the air alone, but she never attributed the success solely on herself. In her book, “Last Flight,” she said that her husband’s encouragement was one of the reasons why she achieved that feat. Partnerships are investments where you bargain trust for trust. In an industry where everyone can be a competitor, a partner comes hardly by.