In the natural order of things, secrecy is often tied to safety. It is seen in the ability of animals to hide in plain sight helps them evade dangerous predators. In the same way, humans came up with methods to protect precious items and valuable information by keeping them in secret. And in a larger scale, companies keep the information of their business plans in tight circulations to maintain their competitive advantage over others in the same industry.

What is a Non Disclosure Agreement and Why is it Necessary?

How do you Come Up with an Effective NDA?

What is a Non Disclosure Agreement and Why is it Necessary?

Also known as contracts of silence, non-disclosure agreements are legal contracts between parties that provide a list of the sensitive information that is available for both parties, but not for external parties. It is a necessary tool for two companies that are working together for a specific project. It protects each company’s trade secrets and sensitive information that can most likely affect their operations. A non-disclosure agreement is also a materialization of the confidential relationship of the parties—may it be mutual or non-mutual.

Non-disclosure and confidentiality agreements are not only essential in various business transactions. Aside from company to company transactions, it is also a well-used document in employee hiring. Most companies require their new hires to sign NDAs to protect the company’s sensitive information that an employee can learn during their employment. Apart from that process, it is also valuable and highly honored in doctor-patient relationships. Any relationship that requires trust and confidence can make use of a non-disclosure agreement. 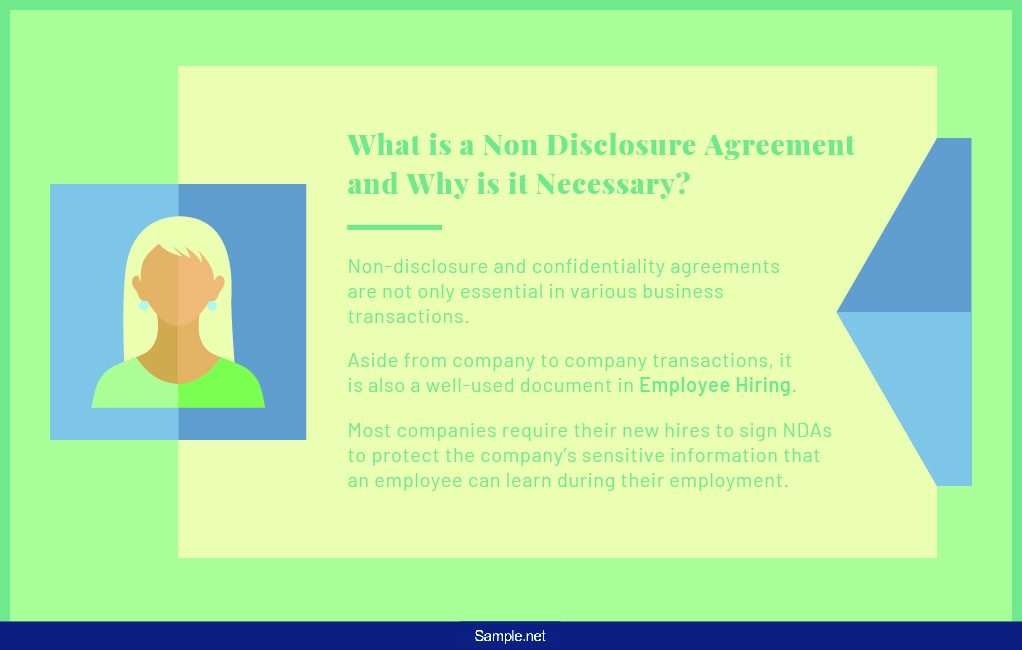 The use of non-disclosure agreements is straightforward. It is, first and foremost, a document that assures the protection of sensitive information. Despite its simple and direct fundamental function, it has its quirks. But its difference lies in the slight variations that cater to the number and roles of the parties involved. Listed below are the several types of non-disclosure agreements and its difference from each one.

Unilateral Non-Disclosure Agreement: Unilateral agreements are one-way transactions. These agreements are also the non-mutual confidentiality agreements. In situations that make use of unilateral non-disclosure agreements, only one party reveals information and requires the confidence of the other party. These business documents are often necessary for client-based relationships where the only responsibility of the receiving end is to provide sensitive information for one purpose only. The standard documents involved in these relationships are business plans, financial plans, and other documents that are deemed to be confidential by a party. These documents are often the subject of the relationship in the first place.Bilateral Non-Disclosure Agreement: Bilateral agreements require confidence from both parties because both are expected to disclose sensitive information throughout the partnership. This type of non-disclosure agreement is a standard document during company mergers, acquisitions, and joint ventures. In the mentioned activities, sensitive data from both parties are reviewed and discussed to come up with the best results possible. Effective business plans for merged companies happen when both parties fully disclose their best practices. Although there are some cases when the initial plan for the agreement is unilateral. The other party can request a mutual agreement when there is a highly likely possibility that their party can possibly disclose sensitive information.Multilateral Non-Disclosure Agreement: The name of the agreement suggests the presence of multiple parties. In this setup, there are three or more involved parties in the negotiation. But, similar to the unilateral agreement, only one party is expected to disclose information. The other two parties, in turn, are expected to keep mum about the whole situation until the agreement expires or when it is necessary. Multilateral confidentiality agreements are commonly used in presenting an unpatented invention to potential investors. The presentation of an unpatented invention poses a great threat to the inventor as they cannot claim ownership of the subject before patenting it. A multilateral agreement binds all the investors, who are present during the presentation pitch, not to announce and replicate the material until the necessary actions are done.

Shaping man’s history is not an easy feat. Most significant events of the past were caused by the clash and overturn of two opposing forces. These events are often started by opposition and defiance to something that hinders. Similar to the bind of NDAs, it forces the signee to adhere to all the stipulations. Warranted to the assumption that all the conditions are for betterment. But, there were cases where the utility of non-disclosure agreements was taken into the wrong light. And to correct these unethical uses, some people defied and spoke against it. Not minding the consequences of the contract. Here are some of the notable whistleblower cases that left a dent in human history.

US Involvement in the Vietnam War

The conflict between the northern and southern parts of Vietnam started well before the involvement of the US government and military forces. The US government stepped into the conflict because of its stand. Its main concern is to prevent the spread of communism of the North to the Southern parts of Vietnam. The plans and the intensity of the US government’s involvement in the Vietnam war were documented in the Department of Defense’s study, the Pentagon Papers. This research is top-secret until Daniel Ellsberg disclosed it. Ellsberg is an economist, analyst, and military analyst. He released details of the paper to newspaper companies such as The New York Times and The Washington Post. And because of Ellsberg’s illegal exposure of information, he faced several cases filed against him by the government. He was tagged as a spy and a thief of the Pentagon Papers. Later on, court rulings acquitted him of the allegations, labeling them as mistrials. More importantly, the government was convicted of its dishonesty to the state and its people.

Large corporations classify their daily business operation methods and systems as confidential information. As soon as new hires enter the organization, they are bound to agree to the terms of the company. It is to protect and not disclose any sensitive information that they come across within the duration of their stay. Several companies were in hot water because of controversial practices, but not as much as the global pharmaceutical brand, GlaxoSmithKline (GSK). This established company was charged $3 billion because of several criminal and civil liabilities, such as promoting and distributing drugs without approved claims. These controversial practices were tipped to the government by four unnamed employees from the early 1990s until the 2000s. A regional vice president and a senior marketing development manager were said to be part of the whistleblower group. Seeing that these people were well up the corporate ladder, it is heartening to see that their moral compasses are not misaligned.

Spark of the #MeToo Movement

From the proliferation and necessity of non-disclosure agreements in corporate deals, the use of these documents made its way to personal relations. Often masked as part of employment documents, talents in the entertainment industries are forced to sign these documents to keep mum about the different deals that they encounter. The breach of non-disclosure agreements leads to the exposure of sexual harassment experiences among the women in the entertainment industry. Collectively, these narratives were under the slogan: Me Too. This movement was established in 2006, but its relevance resurged when Harvey Weinstein’s assistant chose to speak up, regardless of signing a non-disclosure agreement early on her employment as Weinstein’s assistant. Always remember the name. Zelda Perkins. Perkins became the torchbearer for the other victims of Weinstein. Weinstein is a film producer and co-owner of an entertainment company. His sexual allegation came from accusers who were bound by one thing. A non-disclosure agreement. Perkins narrated she was not allowed to discuss her experiences with anyone, including family and friends. She even received money to stay silent. Regardless of their trauma and the impending consequences of breaking a legally binding document, Perkins and the other victims spoke their truth.

How do you Come Up with an Effective NDA?

Non-disclosure agreements are standard tools in almost every industry around. And in each industry it is present in, the agreement may appear to be different from its counterparts. Its differences—the addition and subtraction of stipulations make it more effective for the industry that requires it. However, despite the uniqueness that is required from it, there are key elements and features that are necessary for composing an effective non-disclosure agreement.

Step 1: Identify the Relationship of the Parties

There are several situations wherein a non-disclosure agreement is necessary. Employee onboarding and working with consultants and freelancers call for it. Collaborations, mergers, and project proposal pitches also require confidentiality agreements. Among all these situations, it is crucial to define the boundary between the involved parties to compose the appropriate type of non-disclosure agreement. Knowing the specific role of a party in the agreement settles if the situation calls for a unilateral, mutual, or multilateral agreement. Alongside with understanding the parts of each party involved, the contract should also contain the correct names of the parties. As obvious as it seems, there are cases where an agreement was null and void because of the incorrect names of the party. Errors such as misspellings and lacking names create significant setbacks for the agreement’s implementation.

Another thing to note is the existence of legal names and business names. Official contracts should contain the legal name of the business and not the trading name. Trading or business names are often used in market advertising.

An often mistake in making a non-disclosure agreement is the definition of what the confidential information is. Most common in unilateral contracts, the signees are left in the dark and always questioning if a particular piece of information is secret or not. As you compose your document, avoid generic or too broad statements in categorizing sensitive information. Indicate its nature and the implication of its disclosure to the public. In classifying the sets of data, also make sure that the segments are specific enough to have a proper distinction from the other classifications. Ensuring the specificity of the confidential information comes in handy when the agreement ends up in legal proceedings. It is expected that the court will assess the uniqueness of these pieces of information. When it is seen to be unnecessarily broad, the court considers the contract unenforceable and invalid.

Step 3: Go into Detail on How to Protect the Information

Apart from detailing and classifying the sets of confidential information, a non-disclosure agreement should also have a list of how to protect the sensitive data once the signee becomes knowledgeable about these. In a more straightforward sense, a section of the agreement should identify the terms on how to use the information. These stipulations are guides on how to communicate these sets of data. For example, this can set the standards on who are the people who can receive the information. It can also include how the data should be communicated and why. These steps are necessary to maintain the confidentiality status of the details.

After explaining the details of confidentiality, the next thing to do is to present the consequences of non-compliance. In this context, breach comes in the form of not honoring the conditions regarding the classification and protection of sensitive information. Most contracts provide stipulations regarding the payment of damages in cases of breach. Aside from demanding the reparation of damages, the afflicted party can also file other lawsuits according to the nature that the information serves. The party can file for copyright infringement when the stolen data was illegally reproduced, distributed, and displayed. Such as in cases of movie and music piracy. Other than copyright infringement, the distressed party can file for trade secret misappropriation. This case happens when trade secrets are mishandled and disclosed to unauthorized people in inappropriate setups. 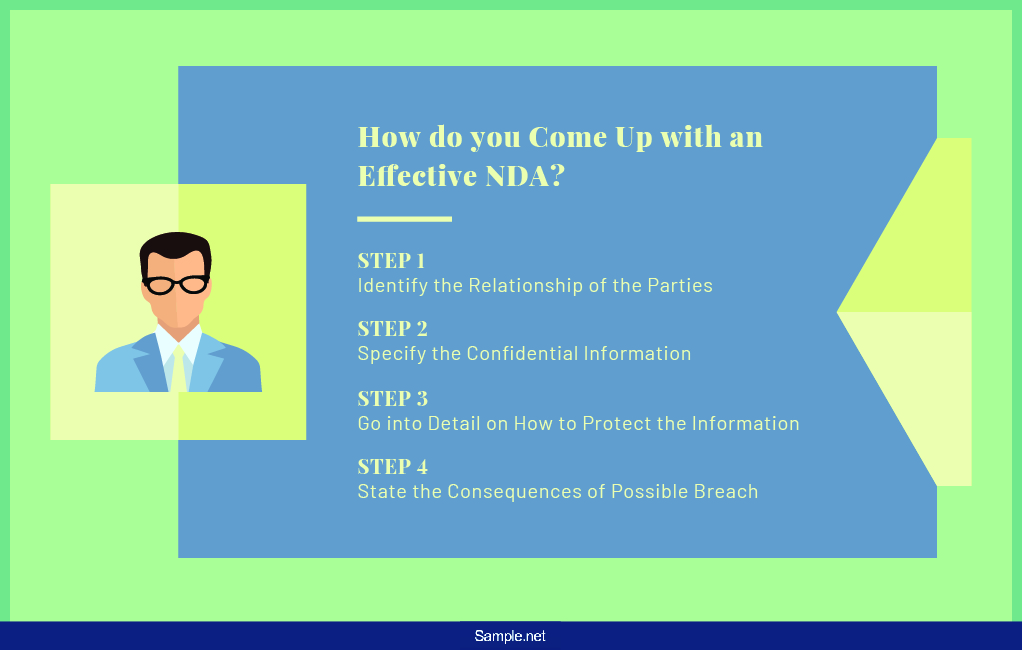