Letting go is hard. But when things are not working out as hoped, it may be time to terminate a partnership or contract. Ending an agreement that does not help you or your business is a good step towards protecting your interests. Termination agreements give you a legal way out of contracts that you think would not contribute or would just harm your cause. When you have a valid reason to withdraw from an agreement, the technicalities of a contract should not bind you.

What Is a Termination Agreement?

It is bad business to stay in an aimless relationship. Ending a partnership is a mutual decision that all the concerned parties agreed. When the entities involved in the relationship decide to withdraw from their commitments, they should put it into formal writing. You may move to end an agreement when your needs are not satisfied. For instance, you cancel a service contract when your employee cannot comply with the productivity requirements of the job. The contract also ends when the goal of the relationship has been fulfilled. For example, if contractors already finished the office remodeling project, the termination agreement declares in writing the terms and conditions that you and the other party should satisfy as a consequence of contract cancellation and termination.

Short-term contracts, like a lease and a remodeling contract, come with an end date clause. After the specified date, you can move to void or renew the contract. There are also contracts with an indefinite effectivity period. For example, a worker can stay employed until retirement. Termination can happen at the request of either party. The said worker can file for resignation, or you can terminate the employment contract on valid grounds. The terms and conditions of the contract are effective until revoked. Therefore, all parties to the contract should agree to the termination. Both short-term and indefinite contracts need termination agreements to formally end a relationship as well as settle future legal disputes on obligations. 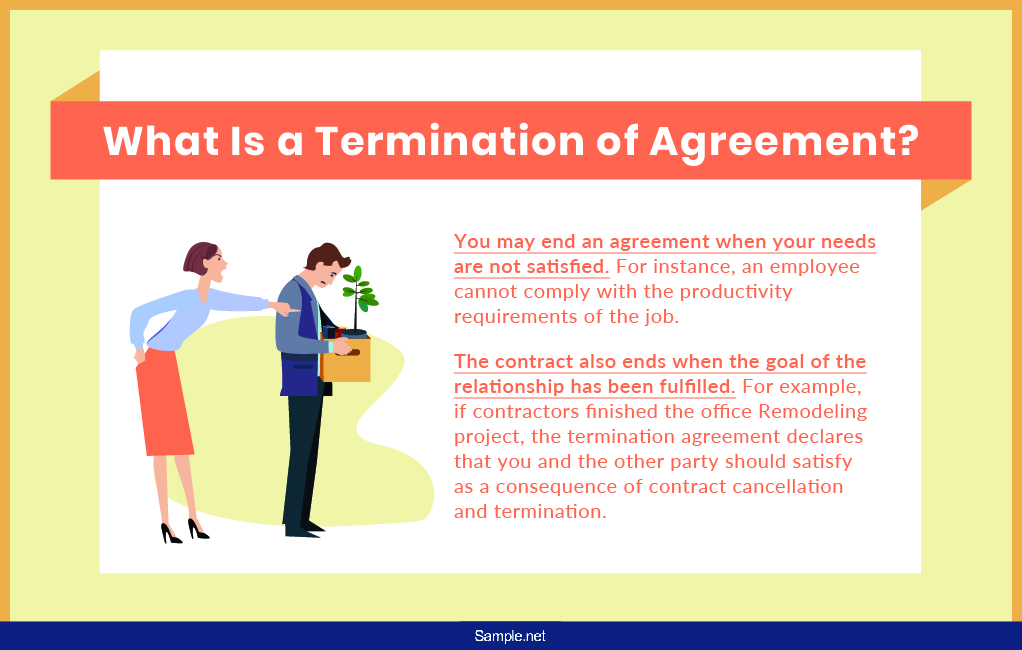 Let It Go: When to End a Contract

Contracts can end after a period or after the terms and conditions are satisfied. This kind of agreement can be extended when both parties agree to renewal. On the other hand, some contracts automatically renew. When you want to terminate your agreement with another party, you have to know which kind of contract are you tied to. Should you still find the need to end your contract, you have to provide valid reasons for its termination.

Prior Agreement: The parties to the contract may agree to withdraw from the relationship. The withdrawal can occur before or during the duration of the contract, provided that both parties agree to this option prior to contract signing.Breach: If, for example, the other party did not fulfill the expected responsibilities, you may move to end your contract with the person or organization. Too much delay in the delivery of items, products, or documents could be a breach of contract, especially if it harms your business.Impossibility: Unforeseen circumstances can cause the nonfulfillment of responsibilities. Due to an unexpected turn of events, a participant of the contract may be unable to perform the duties and obligations. Because he or she cannot carry out the responsibilities, you may withdraw from the contract with the person.Recission: You can cancel a contract for cases of fraud, deception, and misrepresentation. Misleading the company can be through fake documents or nondisclosure of important information. For example, intentionally supplying defective items to businesses can be a breach of the sales contract.Completion: When all parties in the contract have fulfilled the project, service, or promise, the contract is complete and terminated. You should formally end the contract with a termination agreement. Doing so puts to record that the parties satisfied the terms and conditions. When benefits, like severance pay, are included in the contract as a consequence of termination, the liable party should oblige.

A separation agreement may already be elaborated in the employment contract. It can also be reviewed during the discussion of contract termination. The agreement touches on the final paycheck policy, other benefits, and a severance package. A company may opt to provide severance pay to its employee as an assurance that the person won’t sue the company. The package can also include health benefits, insurance, and assistance in finding a job. Furthermore, your company may also provide an unemployment compensation plan to help the person transition into a new job

If one party violated the contract, it has to compensate the aggrieved party as a consequence. The same is true for wrongful termination. Compensation can come in payments for the direct and consequential damages and losses. It covers wages, benefits, emotional distress, and legal fees, among others. The aggrieved party would have to sue the offending party and prove that there are damages and a cause for distress. Then, the case has to be presented and defended in court. The common remedy for the damages incurred is monetary. In cases where the employee is the aggrieved party, the court may require the company to reinstate the person to the position he or she handled before the contract. The company owes the person compensation for the damages caused.

How to Terminate a Contract

It is a progressive and professional practice to notify the other party beforehand regarding your intent to withdraw from the agreement. The decision to end the agreement should be deliberated with relevant personnel or legal counsel. For example, if your company intends to discharge an employee for poor performance and work ethic, you have to consult with the management and an attorney before you proceed. Not being rash and impulsive on your decision to withdraw from a contract can save you from legal trouble. Regardless of your reason for withdrawal, you have to follow a process on how to terminate a contract properly.

Whether you are a company, a public, or a private entity, you can be sued for wrongful termination of the contract. You can still get out of the agreement if it harms your interest. But you have to provide a good reason for your intention. Do you feel that the terms are unfair on your end? Do you think you should get more out of the relationship? You can create a list of reasons why you want to pull out of the contract. Writing things down lets you explain your case better when you are drafting a notice to terminate the contract.

The answers we seek regarding contact termination may just be in front of us. In your contract, you are likely to find a termination clause that tells you how you can pull out from the agreement. A contract clause is a section in the contract that elaborates on a specific subject—in this case, on termination. It defines the procedure in case a party decides to disengage from the obligations formally. The contract also indicates what constitutes a violation of the agreement. Take time to understand the terms and see if your concerns can still be negotiated.

Step 3: Notify the Other Party

Inform the other party about your intention to withdraw from the contract through a written notice. This is your record that you sent out a notice to the other party. This is a vital document during legal disputes on violations and unsettled obligations. In the document, elaborate your reasons (as established in Step 1) on why you wish for the agreement to be voided. When you are referring to a section in the contract, cite it on your written notice. In writing your notice and meeting the other party, remember to be respectful but firm with your words.

Step 4: Be Direct to the Point

Anything you will say can be used against you in the court of law. This statement is true even for written notices. When explaining why you wish to withdraw, stick to the facts. For example, instead of saying that the other party did not do their obligations, write down the numbers for output expected and delivered. When you are ending the business relationship, avoid saying statements along the lines of “It’s not you. It’s me.” You may be able to use your notice in court, but such a statement in the document can be used against you. You can be polite and still mean business.

What is the difference between cancellation and termination of a contract?

Although they are used interchangeably, there is a technical difference between the two, as stated by UpCounsel. You call for the cancellation of a contract when there is a violation or breach of its terms and conditions. It can also be that the contract itself isn’t valid or effective. Whereas, termination of a contract occurs before or on the date when the contract is set to end. In this case, no violation or breach pushed for the end of the agreement.

What happens if there is no termination clause in a contract?

In general, contracts contain a termination clause. For instances where the clause is absent, you can still end the contract as long as you notify the other party. Especially for this case, you should protect yourself through the submission of a formal written notice.

How is firing different from terminating?

In both situations, the employee, contractor, or organization is involuntarily discharged from the project or employment. Therefore, there is no difference between the two.

How is a contract terminated by mutual agreement?

You can achieve mutual agreement on contract termination when all the parties who signed the original contract agree to end the contract.

When is a contract null and void?

The contract is null and void when its terms and conditions, drafting, and signing are not valid and enforceable. For example, the contract was made with a party that could give legal and informed consent.

Who should have the original copy of the agreement?

Each party to the contract and the termination agreement should keep an original signed copy of the document. If there are four people in the contract, then each people should have four original copies. In this way, everyone can keep the file when a need arises.

With termination agreements, there is no reason to stay in a relationship that is bad for you. You can choose to end things and start somewhere new. Whether you know that you deserve a better service than what you are getting or you have decided to invest your resources in better opportunities, you will be able to do so. With termination agreements, you are sure that you are relieved of the responsibilities in the contract. You are protected from future legal trouble, too.