Have you ever played a game of Yahtzee? It is a dice game invented by Milton Bradley in the early 1940s but was initially marketed as “Yatzie” by the National Association Service of Toledo, Ohio. This game is quite similar to the game of Poker Dice and Cheerio Dice Game. The objective is simple, score the most points by rolling five dice to make certain combinations, then the game ends after scoring all thirteen categories. You win if you happen to have the highest score in the group. So, are you interested in playing? Learn more about the rules of Yahtzee and get more tips on how to win the game today! In this article, we will be talking about the best strategies in playing Yahtzee and how to score a Yahtzee score sheet with ease.

What is a Yahtzee Score Sheet?

A Yahtzee score sheet records the points gained by each player for the entire thirteen rounds by listing down the scores on both upper and lower sections. Each section has a different scoring system. Overall, the sheet has thirteen scoring boxes for each player to fill after each round and a few columns for new games. The upper section (section 1) comprises single-numbered slots from ones through sixes. The lower section (section 2), on the other hand, contains the categories of three of a kind, four of a kind, full house, small straight, large straight, chance, and a Yahtzee. Once all points are recorded in the score sheet, both players total their accumulated scores. The player with the highest score wins the game. 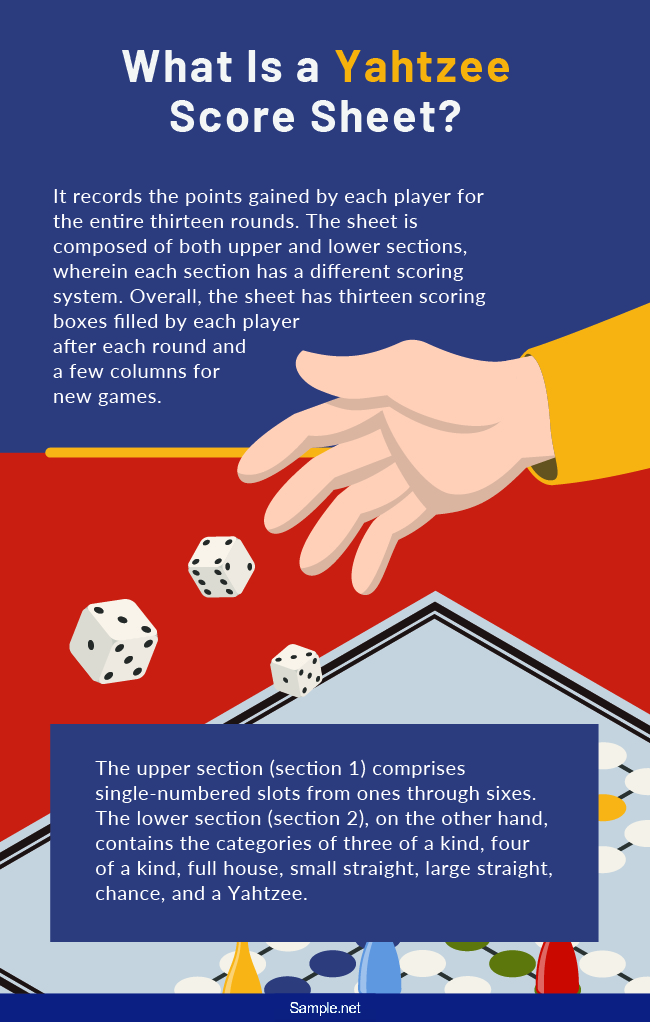 The Official Rules for Playing Yahtzee

Yahtzee may sound confusing in the beginning, especially if this is your first time playing it. However, once you get the hang of it, everything becomes a piece of cake. Learn all about the official rules of Yahtzee with this list and have fun playing it with your friends.

Preparation of the Game

Before the Game Starts, a score sheet is provided to each participant of Yahtzee. The players should fill the necessary information, such as their names in the score sheet. Determine which player goes first by rolling the dice before the game officially starts. The player with the highest total shall be player one and shall start the game, then the player with the second-highest total moves next. This process continues until all players make their moves, then player one begins the next round.

Yahtzee has thirteen rounds; each round, the players, including yourself, will take turns in rolling the dice. Begin by rolling five dice at the start of the game. You may choose to roll the dice the second or third time until you get the desired score. However, upon your third roll, you are required to place a score on the score sheet.

During your first roll, if right off the bat, you achieved the exact combo, you may mark your score sheet and let the next player take his or her turn, If not, proceed with your second and third roll. Set aside keepers’ during your first and second rolls. As much as possible, aim to score the highest possible score. If your roll doesn’t suit any of your empty boxes, enter a zero somewhere in the score sheet. Although scoring a single die value is still better than zero.

The Best Strategies in Playing the Game

Yahtzee may be a game of luck, but it also requires excellent critical thinking and good strategy making to win the game. Winning is not all about getting the highest score in every roll, but instead, it’s all about knowing when and where to put your scores. There are thirteen rounds and thirteen categories, strategize your way to victory and learn a few of our tips on how you may win the game in no time.

How to Score a Yahtzee Score Sheet?

Known for being one of the most popular dice games around the world, Yahtzee is a good pastime to spend with your friends and family during boring days. The game’s objective is simple, accumulate the most points during the game, then you win. However, are you familiar with its scoring system? It may sound confusing at first, but once you fully understand it, everything will be easier for your part. Find out more about how to fill the Yahtzee score sheet and read these steps below.

Step 1: Count the Number of Players

Two or more players can play a game of Yahtzee. One can play this game with only five dice and a few score sheets. Whether you wish to play these with friends or with your family, make sure to count the number of players participating in the game and provide each one of them a Yahtzee score sheet.

Step 2: Write Down the Names of the Players

Let each participant, including yourself, fill their names on the score sheet. For first-timers, make sure to read the rules and its scoring system, before starting the round. The sheet has an upper section, a lower section, and a column for several games for scoring. Familiarize yourself with it, then you may decide who rolls the dice first.

Step 3: Begin the Game and Record the Scores

There are various ways to score in Yahtzee. The upper section consists of the single-number slots from one to sixes. Reach the 35-point bonus in the upper section by accumulating a total of 63 points and more. At the same time, in the lower section, manage to get a Yahtzee and earn a 50-point bonus. Then, write down your scores accordingly on the score sheet.

Yahtzee has a total of thirteen rounds. During the game, you and your opponent have an excellent chance to score a three of a kind, a four of a kind, and the other single-number slots. However, scoring high or scoring at all in a small and large straight, in a full house, or in the Yahtzee slot might be harder than what you expect. Nevertheless, record all your scores and calculate the total. The player with the highest score wins the game.

What is the highest Yahtzee score ever recorded?

In a regular game with no Yahtzee bonus, a player’s highest score may reach a total of 270 to 375 points. However, when one, two, or three Yahtzee bonuses are achieved by the player, they might get a total of 420 to 1575 points as their maximum score.

What are the odds of getting a Yahtzee in three rolls?

What is the lowest possible Yahtzee score?

5 points is the lowest possible score a player can gain in a game of Yahtzee. The player can achieve this score by getting all one point (1, 1, 1, 1, 1) from the five dice and score it in the “Chance” box, then gain all zeros for the rest of the boxes.

What is a good average Yahtzee score?

What happens if you get more than one Yahtzee?

A Yahtzee is a bonus worth 50 points given to the player if he or she manages to get all five dice to show the same number, either from the values one to six. If a player happens to get more than one Yahtzee during the game, they have the chance to gain a Yahtzee bonus worth 100 points. However, if they have filled the Yahtzee box with a zero, they will no longer be eligible for the Yahtzee bonus until the next game starts.

Yahtzee is a fun game to play and is popular worldwide since its first release. Like other dice games, Yahtzee is a game of luck. However, you also need the right skills and strategies to win. With the development of technology, the game has developed online versions tapping to the kids in the new generation. And, even until today, Yahtzee never lost its magic to millions of players around the world.