A human mind is a tricky place. They can be very hard to please and very easy to convince at the same time. The ever-changing scope of a man’s perception and the way he sees things and how that changes everything around him is not only a topic that excites psychologists and sociologists; it also stirs business people and marketers to the same degree. That’s why surveys and questionnaires were put in place to discover what shift their thoughts are meaning into. A Likert scale as a questionnaire method has played an important role in accomplishing this task.

What Is a Likert Scale?

A Likert scale is widely used for marketing surveys for a good reason. Instead of directly asking respondents questions for them to answer, which may take a longer time, it gives suggestive statements and gives them a variety of options to determine their response towards the statement. This produces a quantifiable response that researchers or surveyors can use to conclude their study. The results can then be applied to enhance their operations and measure their effectiveness in meeting customer demands.

Aside from providing suggestive statements to guide a respondent’s answer, among strengths of a Likert scale is its allowance for a more gradient answer options. Instead of a direct yes or no response, it gives the option of uncertainty and even the choice of giving no opinion at all. However, like any other consumer questionnaire, even with its varied answer choices, the data collected through a Likert scale might not still be valid when a respondent opts to lie deliberately.

Data-gathering is the highlight of every research attempt, and in its core lies the use of questionnaires to achieve their goal of getting the information. The concept behind questionnaires is that it can reach a huge number of people to express their view on a certain, which in turn, can be an important asset in understanding an idea and bring answers to relevant questions.

Among the most popular types of questionnaire methods are the Likert scale. A Likert scale varies according to its purpose:

Agreement Measuring agreement is the most commonly known purpose for using a Likert scale in community surveys. This type of Likert scale includes indicator statements that aim to determine whether or not a particular object, practice, or criteria gains a person’s approval. In most cases, it employs the following scale options: strongly agree, agree, neutral, disagree, strongly disagree.Satisfaction A Likert scale is also an efficient tool in quantifying a person’s satisfaction. Although the method is named after its creator, the “like” in Likert often gives the impression if something receives your thumbs up or not. For this scale category, it often uses the following options: very satisfied, satisfied, neutral, dissatisfied, very dissatisfied. For more variety, it can also use the excellent to poor scale.Importance This type of Likert scale’s objective is to size up what a particular demographic deem as necessary and what is regarded as practically useless. This is often used in product development surveys where manufacturers or companies attempt to dig what their customer finds important and make a viable product out of the data from the questionnaire. For this Likert variety, the options such as very important, important, moderately important, unimportant, and not important are used.Possibility A Likert scale that zeroes in on this purpose has the goal of gathering data that would provide information on what a group of respondents would probably like to do or perform during a certain circumstance. For business purposes, this is used when entrepreneurs want to have a good picture of what their clients and customers would like to do, what decision they would most likely go for, and what actions they would want to take. Its scale can have options such as very likely, likely, unlikely, and very unlikely.

Likert scale points are the number of options or “points” that your Likert scale has for each question or statement. They differ in purpose and interpretation. They are as follows:

A four-point Likert scale is the first of the even scale options when doing a Likert survey. However, it’s usually frowned upon because it doesn’t provide a middle ground where the respondents can choose to stay on matters that they’re unsure of. It’s known as a “forced” method because they’re prompted to stay only either on the positive or the negative side. However, it’s useful when a research survey needs a definite response, like, for example, the frequency. There’s no neutral or maybe when determining how often you jog from home to work.

The five-point scale provides what the former category cannot: a neutral space. It is among the most commonly used Likert scale because it offers just enough of what a respondent can answer. It can also measure all Likert types, whether it’s satisfaction or agreement, among others. However, because it has limited option numbers, it won’t be able to cover other emotions or attitudes that a respondent has towards a topic when answering an engagement survey. It might not be objective at all, seeing how people easily incorporate sentimental value even when a research topic demands a logical opinion.

A seven-point scale adds another option to the extremes of a five-point scale: the “likely” answer. It gives respondents more to choose from, especially when they come across a matter that they aren’t that sure about, but they wouldn’t want to be placed in the middle.

The following are the other forms of Likert scale point that are rarely used in questionnaires:

Three-Point scale – this type of scale only offers a positive, negative, and neutral response and is usually used to evaluate the agreement. It’s uncomplicated, but it’s limited.

Six-Point scale – this offers all the other responses on the list except for a middle option. However, even without the neutral space, an option such as “less likely” and “more likely” would be able to cover for it.

Nine-Point scale – offers the option of a “very” and “extremely” variation of either a negative response.

Eleven-Point scale – the gradient in this scale is far more elaborative as it divides the poles of positives and negatives into five before it meets at a neutral zone. For this scale, the labels are usually ditched to make way for a less complicated model, which composes of a 0 to 10 scale.

How To Develop a Likert Scale Effectively

How you develop your survey instrument will mean a lot on how your results sill come out. You can’t expect a faulty research questionnaire to produce the best results, wasting your precious time on distributing them and convincing people to participate in your activity. If you’re using the Likert scale method, here’s how you can make it work effectively:

If you hope to gather answers that are pertinent to your problems at hand, make your indicator statement concise and focused on a single topic. If you’re making statements under different categories, make sure you understand what answers it needs to help you make the right statements. As an example, if you’re gathering a survey gauging customer satisfaction specifically in the area of customer service response, your items should bend towards that angle.

Aside from being topic-based, your items should also be clear and unambiguous. Use simple words and concise sentences. Your respondents would want to get through your survey document as fast as possible, and they won’t be able to do that when they have to stop and stare at every item before they understand what it means.

When you’re a researcher, you would want to have a definite positive or negative response to your topic or problem. However, in some cases, respondents who are unsure about their reactions or answers on a particular topic would most likely opt for an option that’s somewhere in between the two. A “neutral” result on your paper isn’t conclusive and would end your months’ work with a dangling result. You won’t want this to happen, and you might get tempted to take whatever is in between and leave your respondents with a definite yes or no. Unknowingly, this could make your results unreliable as well because you’re leaving them with choices that you want them to choose. And an uncertain result might leave your research in a cliffhanger, but it will say something a lot about your topic.

When the time to decide what type of scale style you’re going to use for your business questionnaire, the answer lies in what solutions you’re trying to get. For this one, you have to decide what semantic choices you want to have that’s fitting for your items. As an example, you can use the standard Strongly Agree to Disagree or Satisfied to Dissatisfied keywords, but when the questions demand something else, you need to customize your options. So, when you’re asked for a specific frequency, you can use “Everyday” instead of “Always.” You also need to decide on the number of options that you want your respondents to choose from. Most researchers would decide between a 5-point or a 7-point scale because the odd numbers would provide a middle ground for both the extremes.

You’ll never know if your questionnaire works and efficiently provides you with the right data unless you take it out for a test drive. Before actually getting respondents to answer your questions, gather a small group of people with the same demographics as your actual respondents, and have them answer your questionnaire for a pilot test. This helps you determine whether or not you’ve used the right scales and the number options. This will also allow you to do an item analysis to evaluate your indicator statement and identify if they’ve successfully led you to your answers. 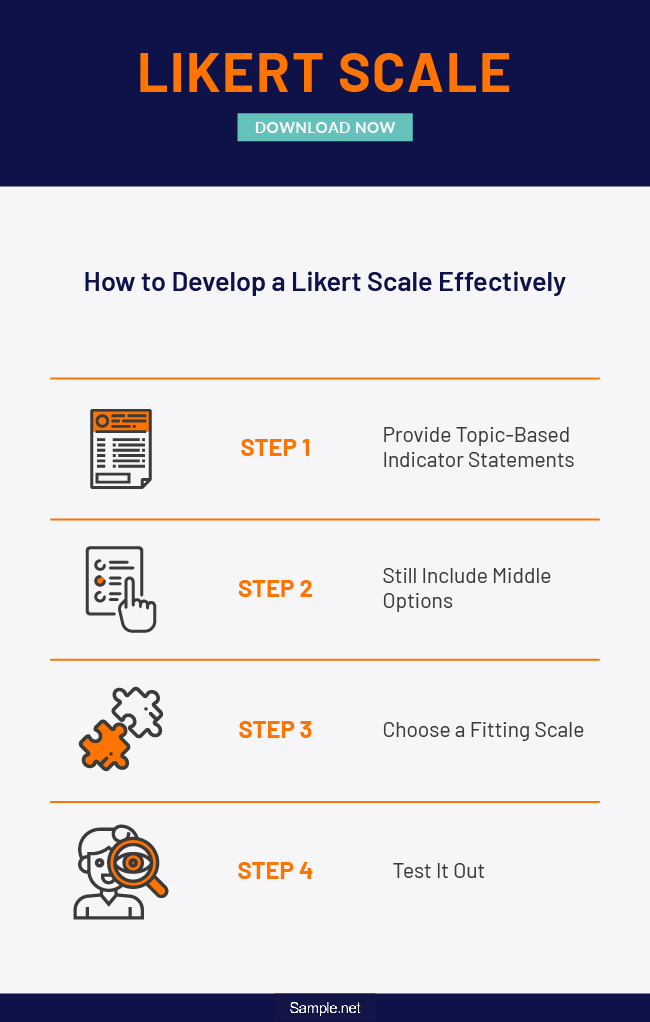 What is a horizontal likert?

A horizontal likert is the placement of the Likert scale points from left to right, which encourages you to place the negatives on the left and the positives to the right to decrease bias.

What is a vertical likert?

A horizontal likert is the placement of the Likert scales top-down, where you need to put the negative on the upper level and the positive on the opposite side to decrease bias.

What are the types of questionnaires?

The core of every study and statistics lies in the intensive data-gathering efforts of everyone involved in the pursuit of knowledge. For many years, development is the outcome of every research and survey that every industry conducted to enhance their services and to provide a concrete result of what’s new in the community. The Likert scale played a significant role in making that happen. Ever since its development, it’s now an essential part of every research tool.