When we enter into a contract, we expect the other party to follow and fulfill their obligations. In the event that they neglect those obligations, it may be necessary for you to send them a contract demand letter. Breach of contract happens when one or both parties of a specific contract violate the terms of their agreement. When we speak of violation of terms, it could mean one party did not deliver goods or services or did not pay the amount stipulated in the contract. In this case, the aggrieved party should send the failing party a contract demand letter, requesting payment or the performance an obligation.

What is a Contract Demand Letter?

ln every contract, there is a fear in either party that the other will not fulfill his obligations. For example, a contractor in a construction contract fears the non-payment of his services. If he does not receive timely payment for his work, this could result in major business losses, not just monetary but as well as partner-wise. The contractor will fail to pay his sub-contractors and his suppliers. Hence, at the time the hiring party defaults in payment, the contractor should immediately send him a contract demand letter for payment.
A contract demand letter is basically a notice letter. It notifies the defaulting party of his breach of obligations. If he does not take action and make matters right, you can proceed to file a lawsuit against him for violation of the contract. As a notice, it gives him time to reflect on his response. He can either decide to settle the issue at once or wait until he gets sued. The letter lays out options the defaulting party may take. It serves as an invitation to negotiate the settlement. It is also used as a pre-trial action a non-breaching party should do.

Alternative Actions You Can Take For Breach of Contract

A contract is a legally binding agreement entered by two parties. Each party has its own sets of obligations. For example, a buy and sell agreement involves a buyer and a seller. The seller has the obligation to deliver goods and services, while the buyer has the obligation to pay for the goods and services. Likewise, a contract may also include a time frame for the delivery of the goods and services and the deadline for payment. If either party violates his or her obligations, then there is a breach of contract. The law gives you remedies in addressing a breach of contract. Some of which are the following.

You can cancel the contract. When you rescind a contract, it is as if the contract never existed and you must return everything you received under the contract. However, this remedy may only be availed of only when it is possible to return the things back to the way they were before. For example, contracts for the sale of non-consumable goods like computer parts. If you feel like the computer parts given to you are not up to standards or what was advertised, you can rescind the contract and return the goods to the seller. In turn, the seller must return your payment. The parties are then discharged from any obligations.

Suing for damages is an action where you file a case in court for breach of obligation and demand for compensation. It does not cancel the contract. In fact, the contract still subsists and enforceable. However, since there exists a breach of contract obligations, the violating party must face some form of consequence and that is paying for damages to the aggrieved party. For example, you signed a lease agreement for an apartment. During the moving day, you find out that there is someone else still living there. You can file a case in court for damages against your landlord for breach of contract. He will have to pay you money for the inconvenience this has caused you. Likewise, this does not affect the validity of the lease contract, you can still rent the apartment under the original lease.

This remedy asks the courts to force a breaching party to a contract to perform his obligation. Rather than asking for damages for breach of contract, the aggrieved party chooses to have the contract completed. This remedy is often used in real estate contract breaches. For example, you entered into a real estate sale and purchase agreement as a buyer. You already paid the purchase price and the necessary license fees. Basically, you have already spent a lot of money for the completion of the transaction. At the last minute, the seller is having second thoughts giving up the property. Suing for damages just won’t cut it and make up for all the time and money you have already spent. Hence, legal action for specific performance is the most logical thing to file. This will prompt the seller to give up the property and complete the transaction.

How To Write a Contract Demand Letter for Breach of Contract

A well-written demand letter can increase your chances of getting a response and settling the issue. The primary reason why you should be sending a contract demand letter is to civilly address the existing issue or tension between you and the defaulting party. To notify him that he has breached his obligations under the contract and you wish for him to take actions in making matters right. To help you draft your contract demand letter and start writing it, below are some steps that can guide you to make an effective and formal demand letter for breach of contract.

It depends on each unique situation. You can either be polite and professional or be aggressive and intimidating when writing your contract demand letter. However, do not confuse aggressive and intimidating to being rude and impolite. When writing the demand letter, it is highly suggested that you be respectful to achieve a reasonable response from the recipient. Your level of aggression can vary from being friendly to serious to threatening. It all really depends on who the recipient is and how much damage he has caused you. The letter’s aggression can also escalate from friendly to threatening if no response is made after a series of demands. In summary, the right tone depends on a case to case basis but there is a thin line between threatening a lawsuit to harassment. So be careful on how you write the letter.

Step 2: Write Down the Facts

Do not assume that the reader knows the particular facts. Even if he does, it is best to include it in the letter to provide context. Briefly narrate the facts in chronological order, starting from the date both of you entered into a contract to the day you decided to write the contract demand letter. Make sure to be very specific about the dates. Especially when the breaching party started defaulting from his obligations such as failure to make payments or failure to deliver. Make reference to emails, texts, calls, or other forms of communications you both have had over the course of the transaction. Remember this letter can be used as evidence in court if you decide to take legal actions against the recipient. The facts in this letter can be used as the basis for your complaint.

Demand for action can either mean two things. You can either demand payment or demand delivery. In case of demand for payment, make sure you clearly indicate the amount you are asking for and how it should be made. Include a breakdown of the total amount and documentation such as receipts or invoices to back up your claims. In case of demand for delivery, specify the goods or services that need to be delivered. Indicate how it should be delivered and any other special instructions for its delivery.

Once you have clearly stated your demands to the recipient, include a reasonable deadline. Provide the time frame in which he can make the payment or delivery. What counts as reasonable depends upon each circumstance. For small accounts and deliveries, it can be anywhere between three to seven days. For big accounts, it can take as long as three months. You can try and negotiate a payment plan such as payment through installments. Either way, it is best to be firm and clear about how you get paid or expect delivery. You can include a statement wherein if the recipient has any questions or wants clarifications, he can just contact you.

The main reason why you are sending the contract demand letter is to settle the issue and ultimately save the contract. You are providing a way for the breaching party to correct his wrongs. If he does not respond to your demands, you can threaten him with consequences such as filing a civil case against him for breach of obligation, rescinding the contract, or suing him for damages. Filing a case in court is an acceptable consequence for breach of obligation, harassing a person is not. Do not make threats such as physically hurting the recipient, harassing his family, and the likes. You might receive a cease and desist letter in the mail. 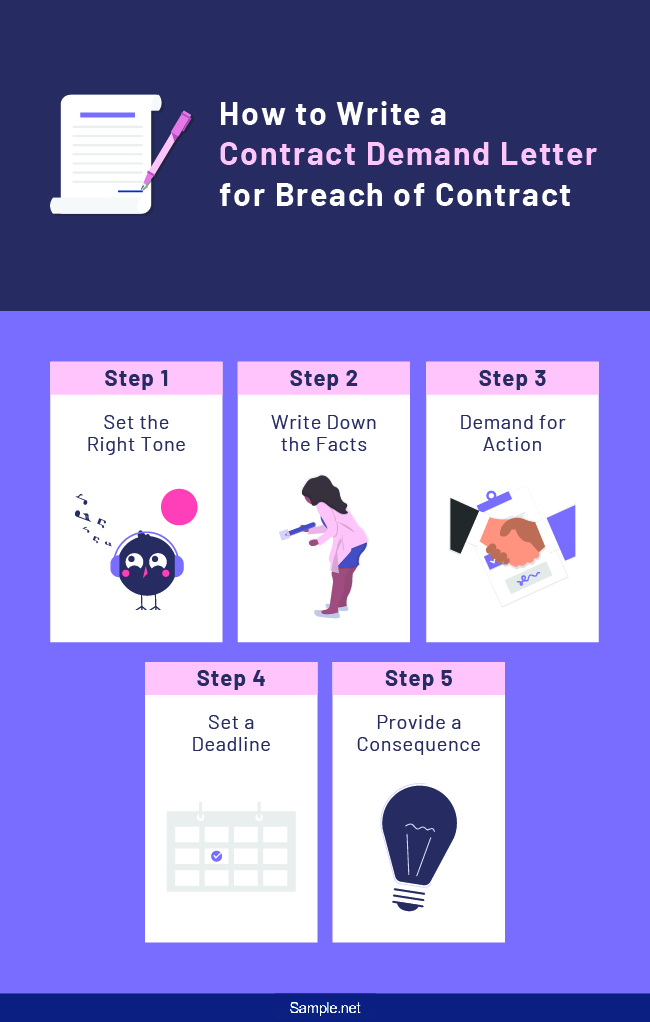 Do I need to hire a lawyer to write and send a contract demand letter?

You can hire a lawyer to send the letter, but it is not a necessity. However, for extreme cases such as stubborn and recipient’s having violent tendencies, it would be best to have the letter send by another person especially a lawyer. Your other options are to have the demand letter sent by a family member, a close friend, a person with authority, or have it sent by mail courier. In the early stages of the complaint, it is best to not get a lawyer involved. Getting a lawyer involved too early can overcomplicate the situation. There is a possibility that it can make matters worse. Try and resolve the issue outside of the legal process, if that does not work then it’s time to hire an attorney.

What happens if I don’t get a response?

Contract demand letters are efficient tools in settling contract disputes, especially when a party fails to perform his obligations. If a buyer fails to make payments, the vendor should send him a demand letter asking for such payment. Otherwise, legal actions may take place. Most of the time, these parties settle their contract disputes immediately after receipt of the letter. Ultimately, saving them time, money, and costly civil suits. If you find yourself in a situation stressing over an ongoing contract that seems to be failing since the other party is partially or entirely neglecting his obligations, then consider writing a formal contract demand letter. The letter will pressure him to take action or face legal consequences.