What is the biggest lie mankind has made since the invention of computers? Ticking “I have read and agreed to the Terms and Conditions.” Who wants to read a tedious, sixty-page long write-up that only has clauses, penalties, fines, possible violations, sanctions, and legal actions? That’s like reading a textbook that only contains letters upon letters of information—too tiresome, despite its importance to your studies, or daily life in general. How much more if it only contains rules and regulations with no possible storytelling or new learning? Yet whether it be partnership, sales, art commission, or employment contracts, these legal documents are vital to any organization.

Businesses will always draft contract agreements to protect not only the employees, partners, or consumers, but also themselves, as it constitutes the boundaries wherein people can operate. These documents are legally-binding. Eevery phrase, clause, and sentence could spell the end of an artist’s career if drafted poorly. Thus, it is highly important to consult a lawyer before making any kind of covenant with any business or manager. We understand that getting a lawyer to draft the contract for you may cost too hefty a price compared to getting them to review it. With that said, we have here printable samples available and ready review and approval from a lawyer, made just for you!

What Is an Artist Contract Agreement?

An artist contract agreement is, in simple terms, a deal or agreement made between an artist and a record label. It usually contains the number of albums an artist can release that a record label will help you publish. It’s, basically, just like any other agreement (e.g., real estate contract agreement, service agreement), but for artist and record label companies. Though it sounds simple enough, getting to sign with a record label is no easy feat. With so many rivals in the market, you have to break more than just a leg in order for a record label to notice you. First, an artist has to build up his reputation. This can be done by either having regular gigs or winning competitions. In other words, exposure! But A combination of both is also great. Then, based on your performance, if an A&R Representative discovers you, he’ll help you get signed with a record label. An A&R Rep functions like a promoter, endorsing you to a record label for a deal. It’s a long and tedious process that may take several years and would require a lot of sleepless nights and a lot of hard work. But, once you seal that sweet deal, the popularity and rep that you gain are limitless. Concerts, TV shows, even movies–anything is possible!

But, before you even get to the road of stardom, there is something more important that you have to take care of. Whether the artist’s career becomes a horror story or a fantasy depends solely on the contract. 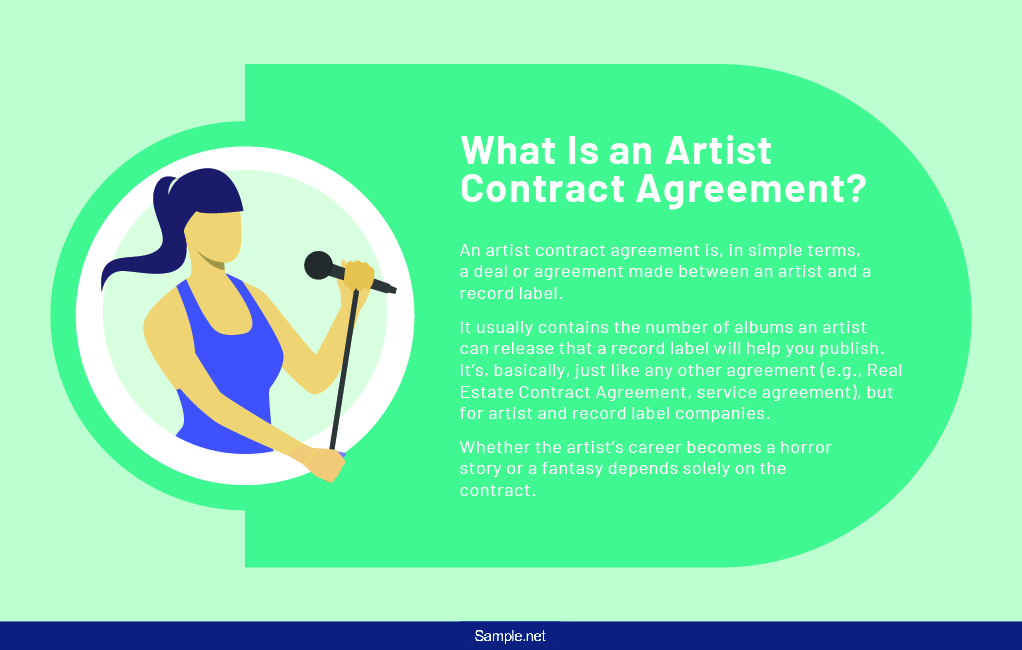 What Happened to JoJo?

Who doesn’t remember JoJo, the youngest solo artist who maintained a number 1 spot in US Billboard Hot 100 Chart with her song “Leave (Get Out)”? It was record-breaking in music history. But, how come we didn’t hear from her until recently?

Hers was definitely not a dying career, and she obviously held a lot of potentials. But she had only resurfaced in the music industry after a long period of silence. JoJo signed a contract with record label Blackground Records. Jojo was at the peak of her career. Only 13 years old at the time, it was almost a dream come true for any teenager to, finally, become a pop star. However, what was supposed to help launch her career had actually buried it under the rubble for years. After her A&R Rep vanished (only resurfacing when she was 18 years old), her career came to a halt. Despite continuously creating music, her record label company refused to publish any of it for reasons we still don’t know. According to a report from Buzzfeed, it was only after a grueling, 7-year struggle that JoJo finally got released from her record label company, Blackground Records. She started to make music, again, with her new record label Atlantic Records. Because she was bound for a 7-album contract, publishing only a few albums meant her agreement was still effective, and she was not allowed to make a new one with another label until the conditions were met.

Her story was only one of the few horror stories of deals (and dreams) gone wrong in the music industry. Some had it worse—from Ke$ha, Prince, Amanda Palmer, to name a few. Their experiences can serve as a laboratory for us to dissect, examine, and learn from.

Artist Contracts and the Social Media

Ever heard of Post Malone? Yep. He was that guy who sang the song “Sunflower” in Spider-Man: Into the Spider-verse. Believe it or not, he started by making his own music and publishing it through “Soundcloud,” a website designed for up-and-coming musicians. Justin Bieber, one of the most phenomenal and intriguing artists of this generation, began with a Youtube video. These days, social media presence has become so prevalent, it is possible to self-publish and get famous without the help of a record label. Chance the Rapper, a famous indie rap artist, has the freedom to make his own music and appear freely in shows. Perhaps, he is one of the few artists who has thrived without the help of record labels, even getting as far as winning seven Grammys. Lil NasX, the singer of “Old Town Road,” also started with TikTok, another social media app that usually features short one or two-minute videos.

In the end, any artist has the option to choose whether to self-publish or sign with a label. A record label can help you jumpstart your career. And since they already know the ins and outs of the market (even dictate trends), they already know what works and what doesn’t. They can fund your tours, concerts, and merchandise. With your own set of market researchers, making marketing plans are made easy. However, you may be bound by the limitations of the contract that you have signed with them.

Self-publishing, on the other hand, gives you more freedom to express what you want when you want it. But the road to stardom might prove to be too difficult for beginners and youngbloods, as they have yet to establish their reputation with the audience. Funding your music can also prove to be difficult.

How Do You Write an Artist Contract and Avoid the Pitfalls?

Some of us have a bad habit of skimming through a legal document, especially if it’s worth fifty or sixty pages long. Whether it be an employment contract or a partnership deal, if it’s long and you don’t have much of a sound understanding of it, you can easily and unknowingly walk into a trap of”professional slavery.”  Blindly agreeing to an artist contract is like having a deal with the devil. It sounds sweet and tempting, but unbeknownst to you, it could mean eternal damnation, a slavery of the worst kind. That is why before signing that deal, no matter how awesome that major record label is, always read through the clauses first, consult an attorney, and make sure you understand what you’re getting yourself into. There are some things that you also have to watch out for in a contract to protect your musical career. Because whether you like it or not, music is not just pure creativity and art. It is also a business.

Oftentimes, record labels tend to exclude a termination date to a contract. This means that they have the freedom to extend your contract for an uncertain period of time. Record labels can be spiteful, so if things go south, they can extend your contract to make sure you cannot make a deal with a record label, spelling the death of your career. On the other hand, if you feel that the terms with the label are becoming more and more unfair, then they can easily bind the artist with them indefinitely.

Open-Ended Liability means if there are damages or any extreme circumstances that are damaging to you or the label, the full responsibility goes to you. In other words, the record label will try to wash their hands, free of the responsibility. In the case of Katy Perry, a report by Scott McDonald of Newsweek said that she had allegedly copied her hit song “Dark Horse” from a Christian rap song “Joyful Noise,” written by an artist named Marcus Gray. Had her contract indicated an open-ended liability, if found guilty, she would have had to shoulder the fines, freeing the record label of any responsibility. Thus, carefully read through your contract and make sure that there is no open-ended liability in case of damages or fines.

Step 3. Include a Change of Control Clause

In business, it is normal to merge with other companies, or for one company to get acquired by a more thriving, successful competitor. This is where “Change of Control” becomes essential. Change of control clause means, when a record label (or company, in general) gets acquired by another company, the contract that an artist has with the first record label still remains in effect until the conditions in the contract are met. However, some companies tend to forget this clause in the agreement. Thus, when the label gets acquired, the company will have to either offer a new contract to the artist or terminate it entirely. To avoid this situation, make sure this clause is drafted in the deal. You can check for the qualities of a comprehensive contract in one of our articles.

Some record labels will try to sign artists to work for them exclusively. Most of the time, this is a strategy by labels in order to hold the artist hostage. They can use this to make sure a famous, lucrative artist can only release music with them for the rest of his life. They can also use this clause to silence an artist forever in an act of spite. Thus, this is one of the most dangerous clauses that a company can include in a contract. It is, simply, modern-day slavery.

Most artists who want to jump start their careers have the tendency to jump automatically into the wagon despite the kind of deal he’d be making. Instances like this tend to have great repercussions. So, you should try to exercise some sort of caution before sealing the deal.

This doesn’t necessarily mean that record label companies are vile and are only after an artist’s money. However, badly-drafted contracts can result in severe damages and hefty fines if not examined and reviewed carefully. As the saying goes, “An ounce of prevention is better than a pound of cure.” It is, perhaps, much better to pay a lawyer to review and draft a contract carefully, than pay millions of dollars for breach of contract.

Contracts are legally-binding documents. It can either be a marriage with what you love or a prison cell for your lofty ideals. Regardless, don’t let those limitations come in the way of your creativity. 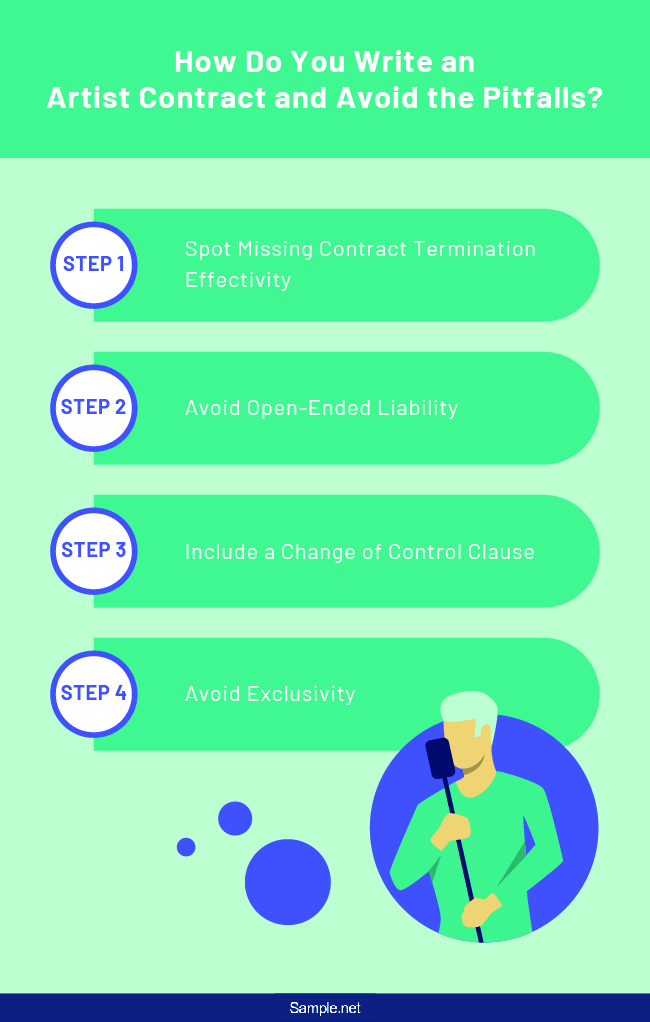