Someone owes you money. Collecting their payment can be a workload especially when they do not answer your phone calls or reply to your texts. Despite applying all the best efforts in contacting them, nothing seems to work. It seems that they have their own fair share of ninja moves to avoid you and paying their debt. In this case, its time to “up the ante” by sending them a credit demand letter. A well-written credit demand letter can increase your chances of getting paid. You can find sample templates of the letter below that you can download and mail to your debtor.

What Is a Credit Demand Letter?

How To Send a Credit Demand Letter to a Debtor

How do I send a credit demand letter?

What should I expect after I send the credit demand letter?

Should I have my credit demand letter notarized before I send it?

What does it mean when I debtor or creditor wishes to settle?

What Is a Credit Demand Letter?

Let’s say you are in the lending business, a lot of people owe you money. The business thrives only when those people pay back their debts. But what happens if they don’t? It could potentially ruin your business and we do not want that to happen. You have options and steps you can take to effect payment. For example, you can include in the loan agreement a clause, that in case of failure to pay, legal action will be taken against the borrower. Before you can take legal action against your debtor, you need to send him a formal credit demand letter. A credit demand letter is the first step you should take when recovering a debt. It is a non-confrontational approach to intimidate a borrower and pressure him to pay his debt back.

The credit demand letter usually includes the amount of debt the borrower owes, a demand for payment of the debt, a deadline to effect payment, and consequences in case of non-payment. There should be a clear breakdown of the total amount of debt so the borrower can easily understand it. In the same light, make it known to the reader-borrower the letter’s purpose which is, to demand from him the payment of the money he owes you. The letter must also include a deadline for response and payment. In case of non-payment, you can file an action in court for the collection of the credit the debtor

1. It is an efficient way of settling a debt.

Your borrower might have forgotten about his loan or balance. The letter is a great way of reminding him of his obligation to you. Instead of forwarding the debt to a collections agency and having to pay for the collector’s fee, you can take the collection action yourself and try to convince the borrower to settle his debt without the intervention of third parties like a debt collector, lawyer, or judge. If your letter is highly persuasive and written well, it can save you and your debtor a lot of time and money.

2. It helps explain the facts to a debtor.

The letter contains all the necessary information about the due debt such as the computation of the debt, the date it was incurred, the date it needs to be settled, and information about the creditor. It thoroughly explains to the reader that there is a debt due and that it needs to be paid on the date stated in the letter or else an alternative course of action will be taken such as filing a civil collections suit in court.

3. You are required to send one before you can file a lawsuit.

The court process requires a creditor to send a credit demand letter to his debtor before he can file a lawsuit for non-payment of debt in court. Hence, you should include a statement in your letter that you will take legal action in case he does not respond or pay the obligation. When the borrower reads this portion of the letter, he will take the demand seriously. No one wants to go through court proceedings and pay to hire an attorney.

4. You can present it as evidence in court.

The credit demand letter can be used as proof that despite all efforts of collecting payment, the debtor still refuses to pay his obligation. Refusal to pay a debt is a cause of action to file a legitimate case in court. The primary documentary evidence you can present during the hearing is the credit demand letter itself. Documentary evidence weights more bearings than character witnesses according to the rules of evidence. So be sure to send the letter via certified mail and keep the signed receipt to show in court during the hearing. 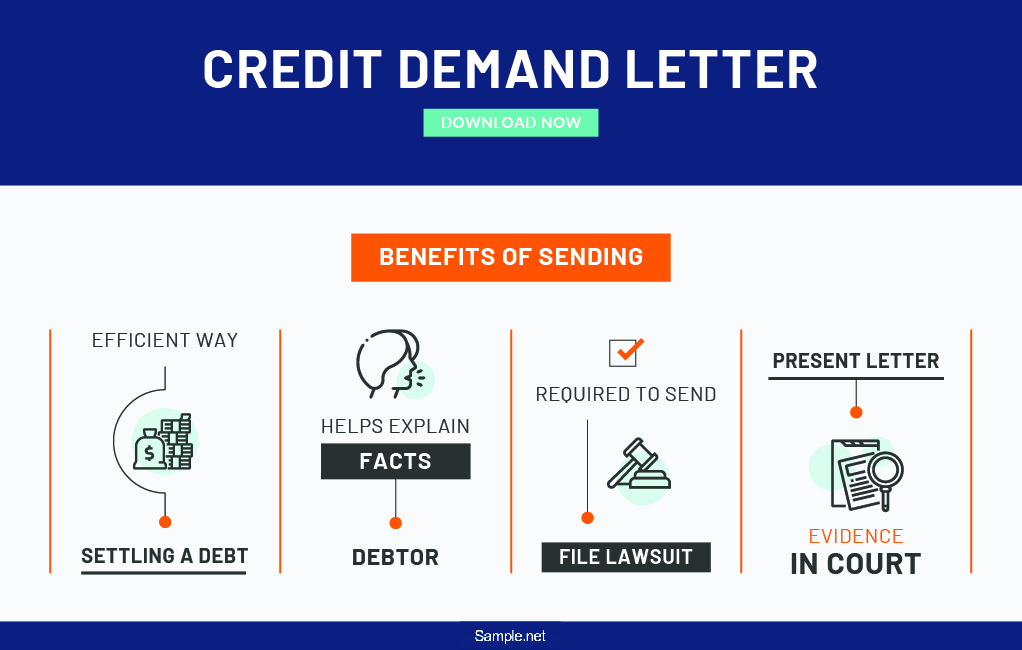 How To Send a Credit Demand Letter to a Debtor

No one wants to go through the legal process and pay hefty court fees, as well as lawyer fees. Hence, as much as possible we should resolve issues such as credit payment outside of the courthouse. The initial step you should take is to send the debtor a credit demand letter containing a demand for payment. Below are steps you can follow to help you write your borrower a credit demand letter.

Determine if the amount of the debt is within your State’s minimum amount for small claims limit. Once you know this fact, you can write the letter knowing what action to take in case of non-payment or response. Usually, the bracket is between $5,000 to $10,000 for the debt to be categorized as a small claim. For any amount over the maximum limit, your best option is to forward the debt to debt collections or hire a lawyer to file a civil suit for collection in court. Consider including this fact to your letter, you can state “In case of refusal to pay, I will be prompted to file a civil suit against you.”

Collect all your documentation proving that the borrower indeed owes you money. You can show the loan contract, the original invoice, receipts, business records, logs, copy of the check, etc. Breakdown the amount of debt so the reader can understand how it came to be. In case the original contract provides a penalty for late payments, make sure you include the calculations in the letter or its attachments. All numerical values reflected in the letter must be itemized and titled. Use a table format and write the title for each value on each row. Finally, include the total amount of the end of the row.

Give the reader a reasonable amount of time to form a reply. Conventionally, a credit demand letter gives the reader a 30-day timeframe to reply. The first day is counted from the day the reader receives the letter and signs the receipt so make sure you send the letter via registered mail. Clearly state in the letter your set deadline to pressure the borrower to reply and pay the money he owes you. Consider writing, “From receipt of this letter, you have 30 days to settle your balance, otherwise, I will have to file legal action against you for collection of payment.”

You can negotiate with the borrower an alternative course of action. You can either have the issue settled outside the court such as through a mediation process and come with a mediation agreement or come up with a reasonable payment plan to effect payment. However, if the borrower does not cooperate and the civil demand is left unresponded, only one option remains and that is to file a collections suit in a civil court. The debtor will receive a court summons which will require his physical presence during the hearing of the case. If he does not show up, he will be declared in default and a court decision with legal powers will mandate him to pay the debt.

How do I send a credit demand letter?

You can send a credit demand letter by handing it out to the recipient in person, hiring another person to personally deliver it to the recipient, engage the services of a lawyer and have him personally deliver the letter on your behalf, or have the letter sent via registered mail. The best option is sending it via registered mail since it offers proof of delivery through the use of a signed receipt. On the other hand, never send a credit demand letter via text or electronic mail. It can be difficult to prove that you send the letter via text or email. Generally, courts do not acknowledge it as proof of delivery.

What should I expect after I send the credit demand letter?

Expect to receive a response or no response at all from the debtor. There are three possible scenarios that can happen after you send the credit demand letter. The recipient will either address the issue by paying the amount of obligation, send a response negotiating the bill, or provide no response at all. In the first instance, you will no longer have to take additional steps. On the other hand, the second scenario will require you to allocate some of your time to effectuate negotiations. Lastly, when no response is given, you can file legal actions against the debtor.

Should I have my credit demand letter notarized before I send it?

Not really. You do not need to have the credit demand letter notarized. It is sufficient that you sign the letter before sending it to the recipient.

What does it mean when I debtor or creditor wishes to settle?

The person who owes you money is not answering your phone call or replying to your texts. It is likely that he is trying to avoid you and paying his debt. The debt is overdue and you are considering forwarding it to a collection agency. But, before you do hire a debt collector, consider writing the debtor a credit demand letter. The letter helps you settle the case without the intervention of credit bureaus; thus, saving you money. You can browse through our sample letter templates above and find one you can work with. All you need to do is download, edit, print, and send the letter to your debtor.