“It takes real planning to organize this kind of chaos,” said Mel Odom, author of Buffy the Vampire Slayer. Event planning business plans can be so stressful. Whether you’re a student planning a school activity or a professional organizing an event for a non-profit organization, it’s a headache if not executed well. From fundraising, sending out proposals and requests for donations, to the day of the event-launching, you need to make sure your event is at least well-managed and organized, if not perfect. It’s all fun and games until you put your event proposal and plan to action.

How Do You Woo?

What are the Best Music Festivals in the US and Canada?

How Do You Write an Effective Sponsorship Letter?

But events can be fun if you plan carefully and get the right sponsors for your event. To help you ease your burden, we have here a few sponsorship letter templates and samples for you to download and use. You can also use our template for event flyers.

Finding sponsors for your event can be a daunting task, especially if you’re still wet behind the ears. Thinking about how to draft a letter that would please the sponsors might be too taxing. Thus, event planners tend to send thousands of generic sponsorship letters to thousands of different prospects. But is that what really hooks sponsors? 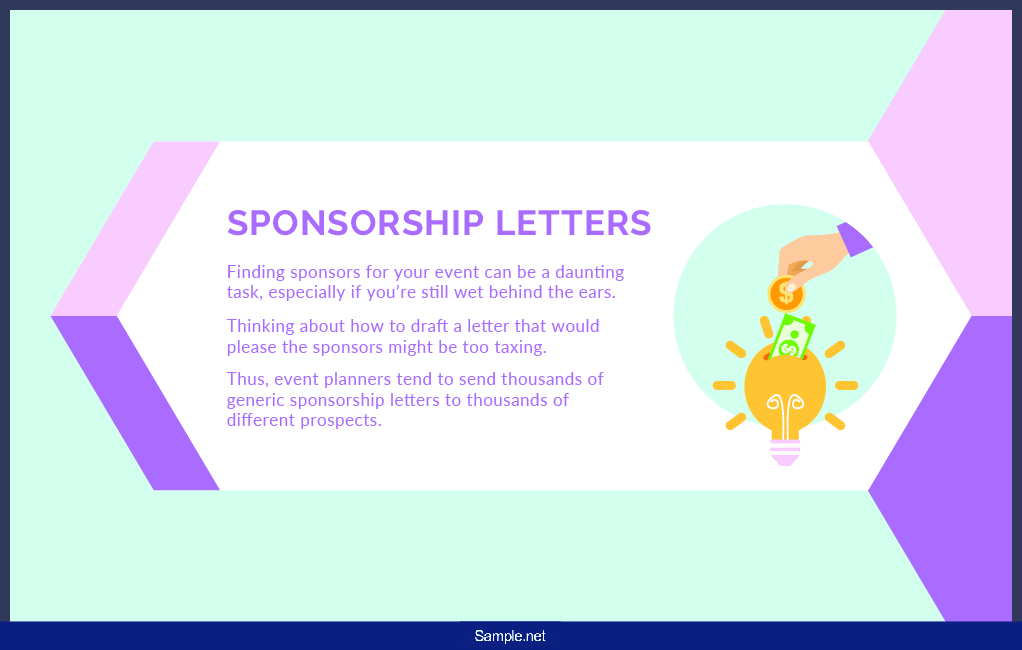 How Do You Woo?

Jeff Haden of Inc.com discussed with the Marketing Director of Bike Monkey, the world’s biggest bike event, Greg Fisher, on what they should expect to get out of sponsoring an event. Investing in something requires a heck-ton of money. Business people usually think things through before sponsoring an event. Sometimes, after the event, they’ll even wonder if it was all worth it. Sponsors don’t simply see an event as a charity case. They see it as a means of investment–a business opportunity. By exposure, they hope to drive more business into their company in the long run. Just like courting a woman, wooing them needs a little TLC. So how do we court a prospect into investing in your event?

Tailor the sponsorship level to the company you’re courting. This is the most important quality that they want to see in a sponsorship request. When they see that the sponsorship levels are specifically designed for them, they will understand that you have done your research and are really interested in building a connection with them. Don’t expect to hear a response when you send a generic sponsorship proposal letter. It’s like trying to throw a hundred basketballs in the hopes of shooting at least one. Clarify what kind of benefit they will get out of investing in you. Do your research. Be unique. Be specific. Customize.Let them understand that their brand matches your event. According to Jeff Haden, as sponsors, they want to make sure their audience matches with their brand. For example, Speedo is well-known amongst athletic swimmers as one of the best brands that make swimming gear. Asking them to sponsor a diving competition might not be the best idea. Though they may sell gear suited for water activities, they don’t sell ones specific for diving. The audience may not care much about the brand strategy and would look for other notable ones in the diving community instead, such as Aqua Lung and Cressi. In that scenario, there can be only two possible outcomes: either Speedo sponsors the event but gets fewer returns, therefore losing money, or Speedo declines to sponsor at all. If you need help in drafting an event proposal, please check our page on event proposal templates. Get them involved. We often think that since we are the ones asking for help, we should also do all the dirty work. But what we don’t know is that sponsors would also like to send reinforcements as much as possible for two reasons: media exposure and insurance. It would reflect well on their brand brief if they are seen in newspapers and on TV that they are hands-on in a major event. Also, business people want to make sure that your event runs well, as it also reflects positively on them. Whether it’s for their benefit or yours, it’s always nice to have some hands ready when you need them.

The key to turning your prospect into a sponsor is to think like them. If you know what they want, then you’ll know how to give it to them.

It was the biggest music festival that never happened. Tom Huddleston Jr. of CNBC reported that over $26 million had been scammed out of unwitting sponsors. Billy McFarland, CEO of Fyre Media, had already been notorious for scamming people with his “invite-only” credit card company Magnises. Then, in April 2017, he came up with a new, brilliantly terrifying idea of organizing the music festival of a lifetime, with celebrities the likes of Kendall Jenner and Bella Hadid in attendance. However, what was thought of as a fantastical, never-before-seen musical journey, turned into a nightmarish disaster. As shown in Netflix’s coverage of the Fyre Festival, people fought over tents instead of villas that were promised in their promotional video. What was supposed to be an exotic and gastronomic experience turned out to be a cheese-sandwich disaster. What’s even worse is that the attendees also had to fly all the way from the US to the Bahamas and get stranded there for days to attend a non-existent event!

Had this not been a scam, this would have been the biggest failure in the history of event planning. If this was not a scam, we could learn a thing or two about this. First, make sure to meet the expectations that you are building on your promotions. Second, ensure to provide proper shelter to your attendees. Third, make sure to set a realistic budget plan for the event. Let’s just say the Fyre Festival was a real thing. $26 million is too low a budget for such a big music festival. That amount is only enough as payment to the celebrities in attendance. Don’t be afraid to ask for a lot of money from your sponsors. They also want the event to succeed as much as you do.

What are the Best Music Festivals in the US and Canada?

The Fyre Festival was the worst “would-have-been” event in the world. It was a bad memory that we all hope to forget. Music festivals, though, in general, are not bad at all. There are a lot of awesome music festivals that were planned so well, we all wish we’d been there. Here are some of the best music festivals in the US and Canada:

Coachella. This is probably one of the biggest events in the US, which a lot of big and up-and-coming celebrities go to. Hosted in California, the Bohemian feels of the event, and the Californian air just makes you fall in love with it over and over again.Burning Man. The festival was originally in honor of the coming of Summer Solstice. One artist named Larry Harvey burned a 9-foot long sculpture of a man at the beach. Soon, a lot of people started coming, and every year, the height of the sculpture keeps getting taller and taller.Lollapalooza. This event is by the 90s for the 90s. It’s a 10-hour festival with a lot of EDM and fun.South by Southwest. If you’re looking to catch a glimpse of musical artists, this is the event to be. This has become a haven for musicians to mix and mingle. If you’re there, then you’re something in the music industry.New Orleans Jazz & Heritage Festival. Jazz Fest, for short, it’s an annual music festival designed to cater to jazz lovers specifically.Mutek. It’s a Canadian music festival that’s held inside the museum of modern art. However, it’s not just all about the music. It also promotes digital art. So if you’re looking to scream and shout to some EDM, this might not be the festival for you.FYF Festival. Sean Carlson started creating his own music festival in hip-hop clubs. The said festival countinue to draw people in big areas like parks to this day although it already has a different ownerthe same company that made Coachella, although it still maintains its original vibe. Take a look at our basic rental contract templates if ever you need help in booking a venue.

How Do You Write an Effective Sponsorship Letter?

Event organizing is a fun activity, especially if you see the people taking part in it having a lot of fun. It allows you to incorporate your creativity and lets you do things your way. However, what greenhorns may have trouble with is funding the event. Hooking sponsors can be tricky. But as long as your letter is well-drafted, you can get them to invest in you. We have listed a few things for you to remember when writing a sponsorship letter. If you need help in creating a marketing strategy for your event, you can also look into our event marketing strategy templates.

Step 1. Start With A Friend

It might be easier for you to talk if the person you are dealing with is a friend. It would be easier for you to explain in great detail, and your friend wouldn’t interrupt you in the middle of your explanation. Also, since you already know each other, the trust had already been built. Thus, you don’t have to worry about having to build rapport with the other party.

With the explosion of technology, communicating with people has never been made easier. The first thing you need to know before sending out a letter would be to find out who to send it to. It’s useless to send it to the company email as it will only get lost or won’t get to the right person. With today’s society, you can use social media to find out the head person. An excellent way to mine for information would be through LinkedIn. Almost all businessmen, employers, directors, are in there, and they also include their work email or work phone. If you have no confidence in writing an email to your prospects, you can always take a look at our email marketing samples for some ideas.

Don’t settle for generic sponsorship levels. It’s also a bad habit to provide them several options or packages. As pointed out earlier, it only shows that you haven’t done any research about the company you are writing. Match the sponsorship level with the prospect.

Step 4. Set Up a Meeting

Providing a sponsorship package, laying the benefits down for them–this has always been the typical template for sponsorship letters. You can only begin to imagine how many the marketing department receives daily. So what makes your letter different from the rest? Actual human communication. Nothing gives the message clearer than verbal communication. You can check the communication plan. State in your letter that you would like to discuss with them what your event is all about or what they’ll be getting out of it. That way, you are giving your prospects a chance to ask questions and clarifications.

Never forget to thank your sponsors before, during, and after the event. Don’t start burning bridges if you still want them to join the gig next year. Show your appreciation to them as a simple human courtesy. You can also do it the old-fashioned way by writing them a thank-you letter. Check our thank you letter templates for an idea in drafting them out. 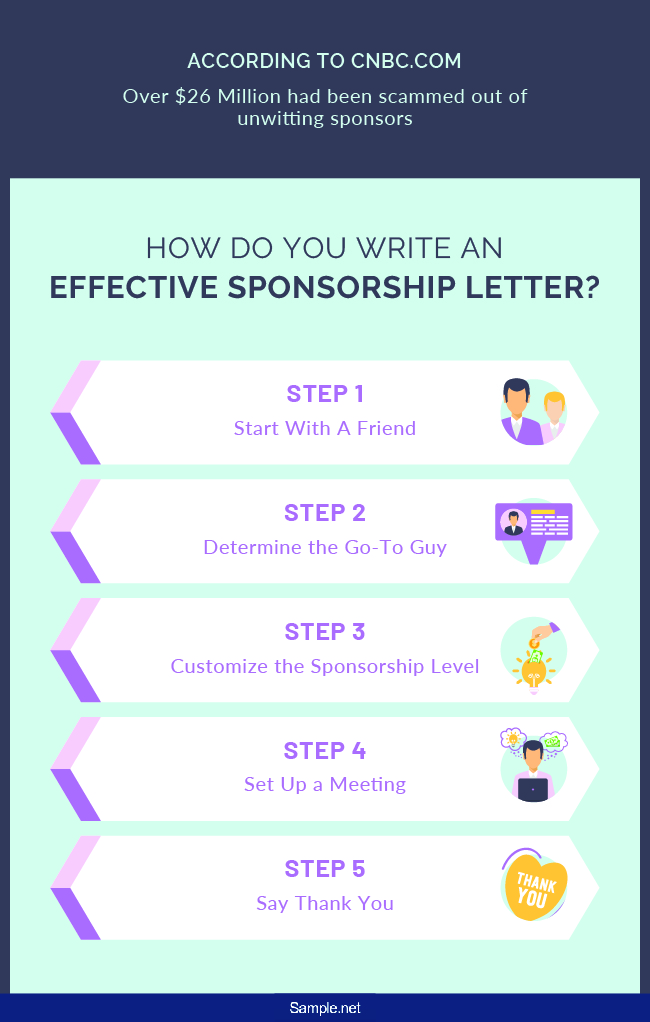 Sponsors are humans before they are business people. One thing that we need to remember when we plan an event is that this is all about human interaction. It’s okay to mess up the first time. Even professionals have their fair share of epic fails. Just remember: whether it’s a fundraising event, a music festival, or a holiday celebration, it’s made so people can have a little bit of fun.