An act of goodwill is exhibited with a positive remark of appreciation. There is nothing more motivating in doing good and in performing to the best of your abilities than with the knowledge that your efforts are paid with a sincere nod of agreement and a word of thank you. With the barrage of unpleasant headlines all around the globe along with both professional and personal issues, being at the receiving end of something meaningful deserves heartfelt and sincere gratitude. A letter of appreciation takes a special role in business to fulfill that purpose. Read below and learn more about this.

What is a Letter of Appreciation?

A letter of appreciation is written when a party desires to extend their gratitude to another party. It can be used both in a personal or professional setting. This is especially an important part of business transactions, as it contributes to building trust and camaraderie between partners, colleagues, employers, and other networks. Among the benefits of appreciation letters in businesses is that it demonstrates both professionalism and courtesy. It also promotes a strong connection. The industry is a tough rugby field of business giants fighting for a goal. It’s impossible to make a score alone; you need allies. Appreciation is your first step towards making partnerships that will help you grow and succeed.

According to the Employee Appreciation Survey by Glassdoor, 81% of employee respondents admit to being motivated when they receive appreciation.

Even though 68% of them already said that they’re receiving enough appreciation from their superiors, 53% of them expressed that they’ll stay longer under a company’s wing when they’re appreciated more. 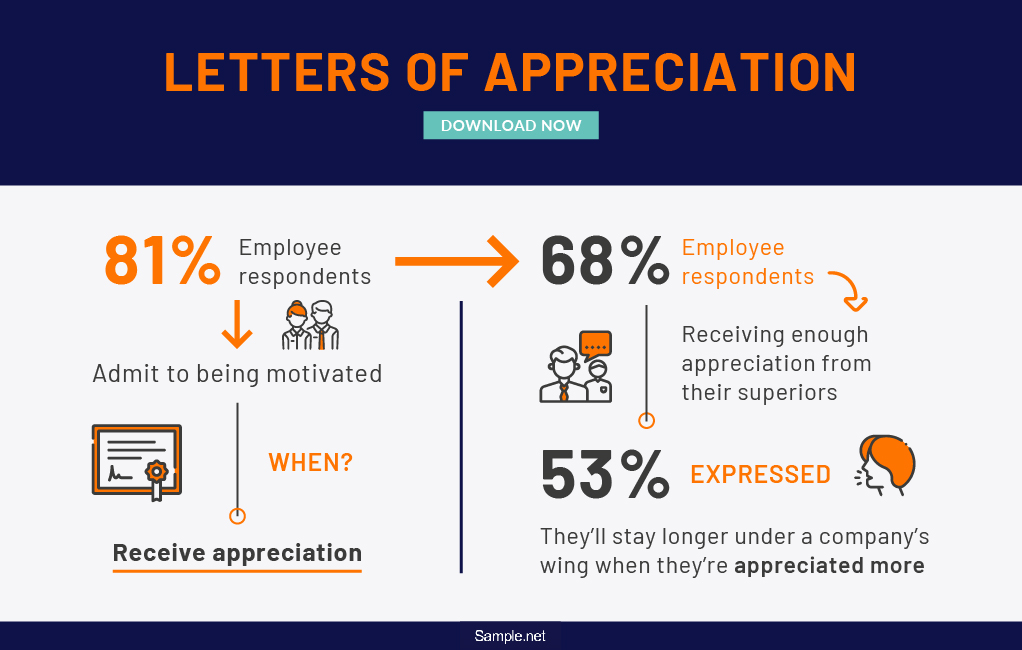 The Benefits of Gratitude and Appreciation: A Research and Statistical Collection

Gratitude and appreciation may be one of the most researched emotions in the world. Over the course of the years, these studies reaped results that showed the relevance of gratitude not only in forging social bonds and professional networks but, most importantly, in the context of science and health. Below are some of the latest findings of the topic:

Gratitude contributes to happiness A study made by psychologists Dr. Robert Emmons and Dr. Michael McCollough involved participants that were divided into three groups. The first group was asked to write about things to be grateful for. The second and third wrote about their daily displeasures and how everyday events have affected them, respectively. Over the course of 10 weeks, the first group notably displayed acts of optimism as they exercised more and lessened their visits to their physicians, proving that gratitude is a component of happiness.Gratitude contributes to mental health Research spearheaded by Joel Wong and his colleagues involved 293 adults seeking psychotherapy services. Before the study, observations revealed that they had clinically low mental health levels. They were divided into three groups, where a single group was asked to write letters of gratitude, while the other group was asked to write about their thoughts on negative experiences. The third group did nothing. The results revealed that the first group who wrote the thank you letters showed signs of elevated mental condition, a helpful guide on how gratitude is essential in mental wellbeing.Gratitude contributes to sleep quality A Journal Psychosomatic Research participated by 401 individuals (141 of whom were clinically sleep impaired) showed that a person’s measure of gratitude showed a subjective effect on his or her sleep quality, resulting in a lesser daytime dysfunction and sleep latency. The study concluded that a positive attitude correlates to a healthy sleeping habit.Appreciation contributes to increased employee engagement According to Gallup’s State of the American Managers: Analytics and Advice for Leaders, managers who place more weight on their subordinate’s strengths rather than their weaknesses increase engagement by twofold. Engagement, as defined by Gallup, is the state where employees are more enthusiastic and dedicated to performing their tasks.Appreciation contributes to employee motivation and retention According to the Employee Appreciation Survey by Glassdoor, 81% of their employee respondents admit to being motivated when they receive appreciation. Even though 68% of them already said that they’re receiving enough appreciation from their superiors, 53% of them expressed that they’ll stay longer under a company’s wing when they’re appreciated more. The key is doing it “more.”

Why You Shouldn’t Underestimate Thank You Letters

A study published by the Association for Psychological Science says how people constantly undervalue the power of gratitude. It has known benefits in the areas of mental and social wellness as well. It’s considered a global etiquette expressed in a variety of traditions across different cultures.

If this is so, why didn’t thank you letters make it to the trends list?

The study says that people place more weight on how awkward it might express their appreciation, hindering them from doing the act. The research involved an experiment where the participants were asked to write thank-you letters to whoever they wished to send it. The researchers then polled their initial and actual responses. From the data, they uncovered that people are often worried about how they would phrase their message and how their recipients would respond.

So, why should thank you letters become a thing? Here are some few reasons that should motivate you to make one:

1. It revives an old tradition. The pre-technology era made personal letters an integral part of people’s lives back in the day. Envelopes and postcards conquered miles of separation and were once the only means to connect to the rest of the world. No wonder the Carpenter’s “Please, Mr. Postman” was a huge hit.

2. It’s unique. Now that messaging takes literally a blink away, who wouldn’t be delighted to receive a letter of gratitude? While everyone’s content with a simple word of thanks followed by a parade of emojis, taking the extra mile of constructing a full-length document makes all the difference.

3. It’s lasting. Although a word of appreciation doesn’t mean anything less, it’s undeniable that appreciation letters hold much more weight. Why? Because it stays longer. It’s a tangible expression of one’s gratitude. It can also become a keepsake worthy of a spot on someone’s memory box.

How to Make a Meaningful Letter of Appreciation

As appreciation letters are clearly an important part not only in strengthening personal relationships but also in forging secure business connections and in managing professional agreements, you might want to start making your own. Follow the guidelines below to get started on your letter document:

Your recipient should be able to know why you’re writing them an appreciation letter in the first place. This should be visible in the first few sentences of your letter. Explain briefly and go directly into details on what you’re grateful for and how it has benefited you, your group, or your organization. Avoid a lengthy introduction and express your appreciation right away. This way, the person receiving the letter can immediately know what the letter is all about and will take an interest in reading the rest of the copy.

Whenever possible, address your letter directly on a particular individual instead of putting a general salutation of “Dear Sir/Madam.” Know who is directly responsible for granting you their approval, aid, presence, or a spot on their schedule. This makes the letter more personal and will be more appreciated by the recipient because it was exclusively addressed for them. Go out of your way to identify these individuals. It will make all the difference when they see their names printed on the paper.

Don’t settle on merely expressing your gratitude. Give a concise narrative on how their contribution benefited you and your organization, as well as how you plan to use their help in the future. Your recipient will be delighted to know that they’re kindness resulted in something valuable. Go into details. As an example, if your association received a financial aid intended for helping a calamity stricken community, explain how you used the contribution and what materials were distributed to the people. This also prompts them to repeat the act and do more. After all, appreciation is the best motivation driver of a philanthropic spirit.

Limit your word count. A short three-paragraph piece would be enough to deliver your message. A lengthy letter won’t measure the potency of your gratitude, nor will it mean that you’re more thankful than any other beneficiary. Make your content as concise as possible. A long, legal-size and back-to-back letter won’t arouse interest, no matter how eloquent the script might be. This is applicable especially if you’re giving the letter to those in the professional sphere such as a business partner, a fellow administrator, or a boss. Their busy schedule will hinder them from paying attention to a lengthy document that’s not urgent. When it comes to content, brevity wins every time.

You can’t send an appreciation letter whenever you feel like it. There’s an etiquette for sending thank you emails, whether it’s for business or personal reasons. Putting yourself on a donor’s shoes, wouldn’t you be surprised to receive a thank you letter a year after making your contribution? Chances are you’ve probably forgotten why you did that in the first place. Be prompt in sending your letter. For a personal thank you letter, send it three days after the favor or gift has been given. For offices, the schedule can be hectic. This might hinder sending the letter immediately days after the act was done. Mailing it a week or two after a kind gesture will be acceptable.

Should I reply to an appreciation letter?

While it is not considered necessary, acknowledging appreciation letters is often commendable to maintain client relationships or partnerships.

What is the ideal thank-you letter format?

When used for business purposes, employ a professional and formal outline by using a business letter format when using print emails. However, when using emails, you can leave out the other parts and go directly to your salutations, greeting, body, and signature with a simple “Thank You” written on the subject line.

Is a handwritten thank you letter necessary?

While it can be more meaningful to write handwritten letters to express your gratitude, it’s impractical when used in a business setting. Your message won’t mean less if you send an email or mail a printed copy with a letterhead. However, if you intend to send it to your friends and relatives, a handwritten letter would be much appreciated.

Success favors the humble, but more so to those who know the value of appreciation. It doesn’t only benefit the receiver, but it also gives the doer a sense of accomplishment. A letter of appreciation may not look like much but just another mail or another paper on someone’s inbox or desk, but it can surely create an impact.