Many paint the business world as the land of milk and honey?a land that promises an abundance of opportunities. But wait until you grab one and it will dawn on you that you’ve entered a cutthroat industry that doesn’t think twice about rejection. Even if you are already aware that rejection is an inevitable part of life in general, you can never be ready when it finally comes. And just like how difficult it is to be on the receiving end, it can also be as difficult when you’re the one doing the act of rejecting such as writing rejection letters.

What Is a Rejection Letter?

What Does a Rejection Letter Include?

Crucial Reasons Why You Need to Send Rejection Letters

How Do You Write a Rejection Letter?

Being the bearer of bad news to countless hopeful applicants and aspiring entrepreneurs is not a joke. However, learning the right steps in writing rejection letters that people can comprehend and accept goes a long way. Learn more about rejection letters as we discuss its basic concepts in this article and we have also included rejection letter samples for your conveniece.

What Is a Rejection Letter?

Rejection letters are sent to inform someone that he or she is being turned down, be it from a job interview, college application, prospective landlord, business funding, or a service provider. Writing and sending rejection letters is a courteous act that does not only help in making improvements on your company’s job hiring practices but is also instrumental in creating impressive brand goodwill and reputation. Rejection letters also give the closure they need so they can proceed to explore other possibilities and opportunities.

The language used in writing rejection letters is business-like and direct to the point. It leaves no room for personal inputs, jokes, apologies, and so on that might translate differently and distastefully by the recipients. 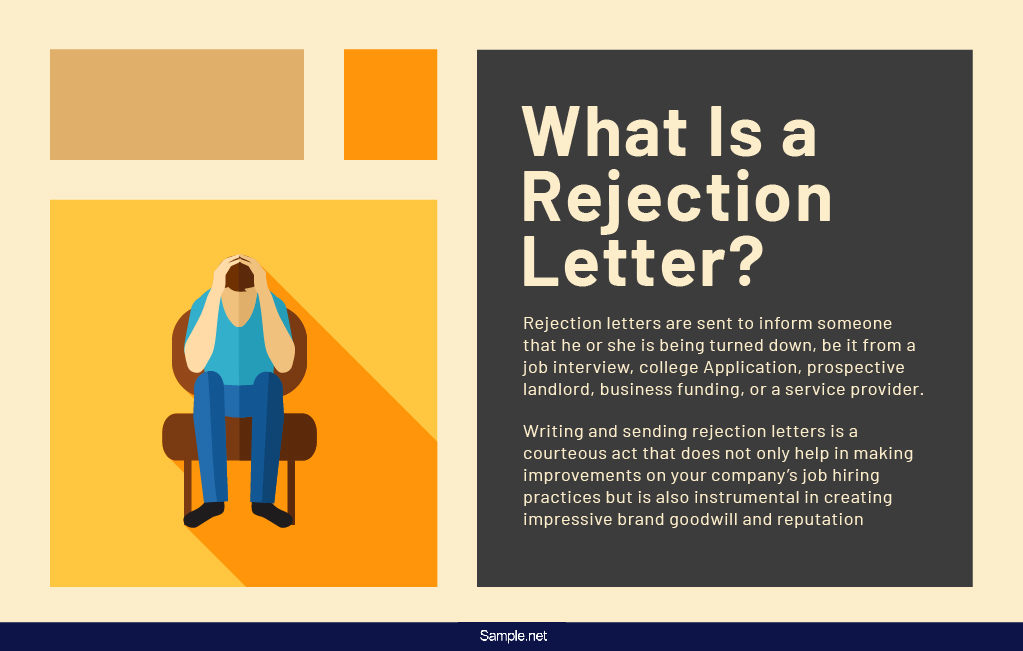 A rejection letter should not exceed more than three paragraphs. The first paragraph is the introductory paragraph. The writer states the primary purpose of the letter in this paragraph. Make it a point to acknowledge the efforts of the candidate or applicant within this part of your letter. It is then followed by the second paragraph or the supporting paragraph, where the writer further explains the details of the rejection, the reasons behind it, and what led to the writer’s decision to turn down the request. One should not incorporate details that can insult the recipient and do more harm in the process. Then last, the third paragraph or the concluding paragraph is the part of the rejection letter where the writer expresses gratitude and well wishes. This part should be short and straightforward since otherwise, it will only make your intentions superficial.

What Does a Rejection Letter Include?

Include Explanation for the Rejection: Since it is a rejection letter, it should always contain the details as to where the person was rejected. If it is a college rejection letter, it may say that the applicant does not meet most of the requirements that the university had clearly stated. If it is a vendor rejection letter, it should indicate that the services offered by the vendor do not match the goals of a company.Include Clear Statement of Rejection: If you are indeed writing a rejection letter, it should have a statement indicating that the applicant did not get the job. Or that the businessmen did not get the funding they applied for. And that the student did not pass the preliminary screening, and so on. Do not dawdle when writing the contents of the letter and clearly state that the person did not make it. Period. Sure, it can be difficult on your end as the bearer of the bad news. Still, the person deserves a clear-cut closure so that he or she can try applying for other companies or colleges or grabbing any other opportunity available.Exclude Extremely Detailed Reasons: While it is expected for the writers to indicate the reasons for the rejection, it should never write particular factors as to why the applicant was turned down. Avoid making unnecessary personal comments that led you to make such a decision. Exclude Insulting Statements: Even if the real reason for rejecting an applicant is that you found a candidate that fits the qualifications of your organization, you don’t have to divulge that as it could hurt the feelings of the receiver and make them question themselves. Make it a point to write a rejection letter that motivates them to try other possibilities rather than make them question their self-worth and value.

Crucial Reasons Why You Need to Send Rejection Letters

Writing rejection letters for some may be a taxing job for most people, especially those from the Human Resources department who deals with a mountain of job applications on the daily. But even with that fact, sending rejection letters is as important as sending acceptance letters. Sending one is not just a matter of “respect begets respect,” but the reasons can be more crucial than that.

It Does Favors to People: Put yourself in the shoes of people who are hoping to get accepted only to find out after a call of inquiry that their application was not a success. If they hadn’t called, they would never know about what happened to their application, and they will keep on hoping. Sure, writing rejection letters can also be as frustrating as receiving one, but writing one can do them a great favor. You allow them to proceed on with another opportunity available for them to grab. It Tells Something About Your Company: The power of mouth is influential. Miss out on doing the right thing, and it can already affect the image of your company. For instance, you failed to send a job rejection letter to an applicant who waited quite a long time for your feedback. The applicant might have already discussed his or her unfavorable experience with relatives and friends and strongly advised them not to apply for your company or let alone buy your products or avail of your services. The simple act of sending a rejection letter can go a long way that even if you have denied their application, you still ended strong with a good impression.It Enables People to Receive Necessary Feedback: Who does not want necessary feedback? Whether it is positive or negative, anyone can make use of feedback to either enhance or improve one’s current performance. Rejection letters can be a source of both kinds of feedback, and you deprive an applicant a chance to grow and improve if you miss out sending a rejection letter that lays out the ways on how the applicant can increase his or her chances the next time around.It Protects Your Company from Liabilities: The Equal Employment Opportunity Commission (EEOC) has federal laws that cover applicants coming from the various protected classes such as race, nationality, age, physical or mental disabilities, sexual orientation, and so on. If you miss the chance of sending a rejection letter to any of your applicants who belong to protected classes, there is a possibility that others will assume that you are discriminating against them since they are under these protected groups. With the help of a rejection letter, you can indicate that their rejection has nothing to do with them being a part of a protected group.

How Do You Write a Rejection Letter?

Step 1: Be Direct to the Point

Do you know that rejection letters can be a form of good news, too? It is good news, which means the recipient is being redirected to a path they were meant to be in (but you don’t have to say this to them explicitly). That is why it crucial to be straightforward when it comes to writing a rejection letter. You don’t have to bother with composing too many long and rambling sentences that will only give the impression that you are defensive with your decision. A good rejection letter should straight up say that you have considered things, but unfortunately, you didn’t see it working out for you. Otherwise, you are only giving the person a chance to make an argument with your decisions.

A simple statement that represents your sympathy regarding the situation at hand can already suffice to appease the letter recipients. You don’t have to say sorry profusely throughout the content of your letter, as this could induce self-pity feelings at the end of the recipient. Sure, no one is really at fault, but it’s common courtesy to apologize to someone, especially after denying them something. 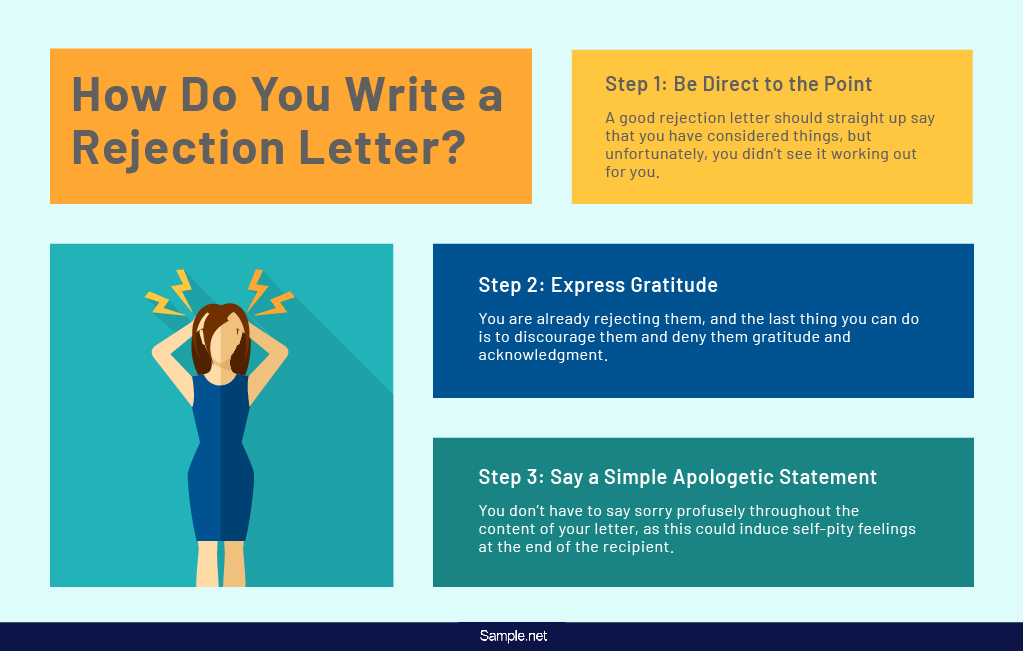