What Are Binding Agreements?

Provisions You Can Find in Binding Agreements

How To Enter Into A Binding Agreement

What makes an agreement unenforceable or invalid?

Is a mediation clause in an agreement binding or non-binding?

What Are Binding Agreements?

Picture this, you and five of your closest friend want to start a partnership for a trucking business. All of you came together and discussed who gets what role in the partnership. At the end of the discussion, everyone is in agreement. You draft-up a document containing the partnership agreement. In the agreement, you include a provision that the document is legally binding on all persons who signed it. That document is now a binding agreement.
A binding agreement is basically a legal contract. It can be enforceable under the law. When any of the parties violate its provisions or contents, the violator can be punished and penalized under both State and Federal laws. The agreement is made when a person offers a promise to do something for a “consideration” (usually, money or property in the form of payment) and the other person accepts the offer. At the moment the other person accepts, there is already a meeting of the minds and an agreement is them formed. The presumption under the law is all agreements are binding. For an agreement to be non-binding, all the parties must agree to its non-binding nature. Typically, they are required to place a provision stating that the agreement is non-binding. In summary, to avoid confusion and future misunderstandings, the agreement must be clear on what is expected from each of the contracting parties. 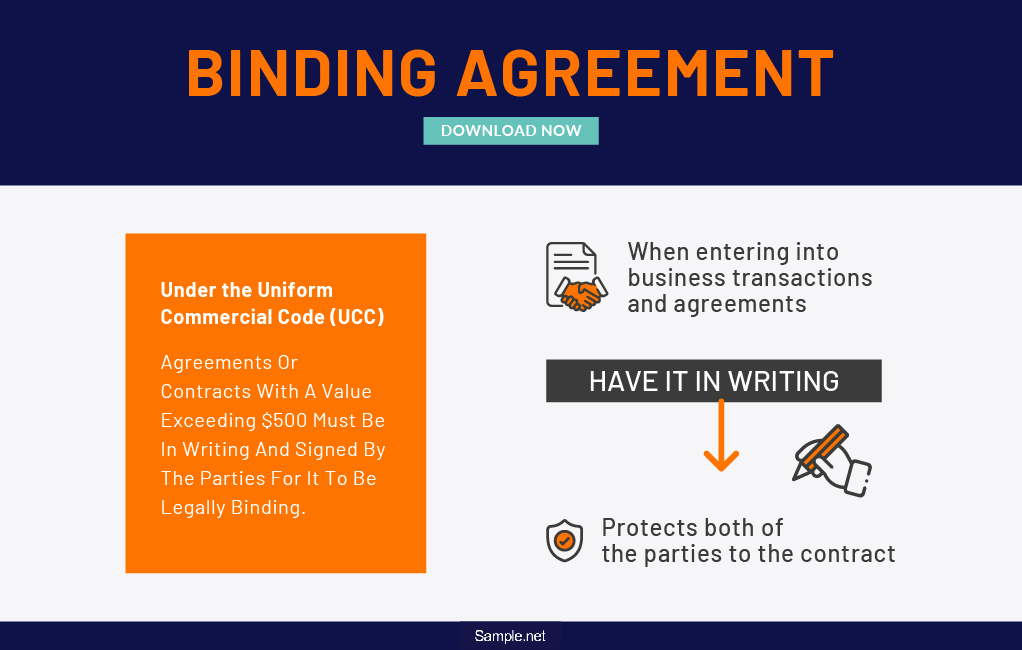 Provisions You Can Find in Binding Agreements

A binding agreement, in essence, is a legally binding contract. It contains provisions and clauses that you can similarly find in most contracts. When written correctly, binding agreements can be enforced in court. In the same light, parties may be held accountable for any violations they make contrary to the terms and conditions contained in the contract. This is why whenever you find yourself in a situation where you have to sign an agreement or contract, make sure you read its contents. In general, legally binding agreements contain the following provisions:

Preamble (Introduction): This is the introductory part of the agreement where you will usually find the name of the contracting parties. In the case of corporations and legal entities, they use their business names together with the name of their representative. Aside from introducing the parties, the preamble also contains a brief background of the entire agreement. For example, it contains a brief description of the parties, description of their legal capacities whether they are fit to enter into a contract, and the name or title of the agreement (i.e. buy and sell agreement).Obligations of the Parties/Terms and Conditions: This section contains the list of obligations of the parties; what they can offer to the agreement. For example, in buy and sell agreements. The parties to which are the buyer and the seller. The seller has the obligation to deliver the goods or services at a designated time and designated place. Meanwhile, the buyer has the obligation to make prompt payment at the right amount and scheduled time. Payment Scheme: Generally contains the cost of the agreement. On the part of the buyer, this is the amount he is willing to pay for the goods or services offered by the seller. In addition, this section may also contain the payment arrangement or how the money will be paid. Both parties may agree to have the payment be in installments or be made in a lump sum or one-time payment. They can also stipulate to pay in cash, checks, or property.Liabilities and Penalties: Binding agreements have the force and effect of law. In case either party fails to do their obligations, they may be held liable and be penalized or fined. Hence, why contracts contain a “liabilities and penalties” section. The clause contains how violations of the contracts shall be handled. Some common actions a non-defaulting party can take is to cancel the contract, collect damages from the breaching party, or file a case in court or opt for mediation. Breach of Contract: When any party to an agreement or contract fails to fulfill their promises or obligations, a breach of contract ensues. When there is a breach of contract, the non-faulting party may take action against the violating party. For example, “in case of breach of contract, the non-faulting party may collect damages against the violating party in the amount of $10, 000.”Governing Law: This section provides what law governs the validity of the contract. In case of disagreements in its interpretation or breaches, which court should the parties go to. It is not uncommon for contracting parties to come from different states especially for business agreements and contracts. Both will have to decide whose State laws will apply to the contract. Each state may have different laws that govern contract interpretation and violations. Typically, the contract can be governed by any of the parties’ state laws or the laws of the state where the contract or agreement was executed.Alternative Dispute Resolution: Court litigations and hiring a legal counsel can get costly. To avoid this situation, contracting parties may agree to have their issues resolved through alternative dispute resolutions such as mediation, conciliation, arbitration, or adjudication.

How To Enter Into A Binding Agreement

Contracts and agreements play an important role in the business industry. Business transactions are made successfully because of documents like agreements. It provides the contracting parties with an elaborate understanding of their relationship with respect to the transaction. At the same time, it provides protection to the personal and business interests of the signing parties. Everything is written on paper. Their mutual agreement is reflected in the document, leaving little to no room for misunderstandings. Hence, why most businessmen opt for agreements to be written. Below is the process on how to enter into a binding agreement.

Step 1: Give or Accept an Offer

An agreement begins with one party making and communicating an offer to the other party. It can be an offer to buy, offer to sell, or offer to do something in exchange for money or any form of consideration. An offer is not valid unless it is received and accepted by the recipient. Once the offer is accepted, there is already a meeting of the minds and an agreement is born. The recipient must immediately communicate his intention to enter into the agreement. If no communication is made or communication is made after a long period, the offer may be terminated by the offerer for lack of response. In this case, no agreement is made. Hence, it is always best to include a deadline for the submission of the response.

Step 2: Place It in Writing

An agreement can be made verbally or in writing. Either way, both are still considered valid provided it contains all the essential elements of a valid contract. However, for a more effective and efficient way of entering into a successful agreement, the best way is to place the agreement in writing. A written agreement can be a useful tool in terms of evidentiary purposes and documentation. If either party wishes to take a breach of contract to civil court, the best evidence they can show to prove the contract exists is by showing the written contract with the signature of both parties. So place your contract in writing, mostly to protect yourself.

Signing the agreement increases its evidentiary value. Moreover, written contracts need to be signed not just for the purpose of evidence but also because the law requires it to be. Under the Uniform Commercial Code (UCC), agreements or contracts with a value exceeding $500 must be in writing and signed by the parties for it to be legally binding. Hence, when entering into business transactions and agreements, the best thing you can do is to have it in writing. In general, this protects both of the parties to the contract.

Step 4: Have the Agreement Notarized

What makes an agreement unenforceable or invalid?

When an agreement is unenforceable, it means the courts of law cannot enforce it. An agreement may be unenforceable because the subject matter is illegal, or when there is fraud, undue influence, misrepresentation, nondisclosure, lack of capacity, and mistake during the signing of the contract. For verbal agreements, it may be unenforceable due to the lack of evidence on the existence of the agreement or it did not satisfy legal requirements such as those stated under the Statute of Frauds (contracts with a value exceeding $500 should be in writing and signed by the parties).

Is a mediation clause in an agreement binding or non-binding?

Generally no, a mediation clause in an agreement is non-binding. Even though the contracting parties agree to submit themselves to a mediation process in the event there is a misunderstanding of the agreement, they are not mandated or obliged to continue or bring themselves to mediation proceedings. Hence, if the party on the onset agrees to mediation but in the middle of the process chooses to withdraw from the proceeding, he is allowed to do so without any legal repercussions. However, the other party has the option to bring the matter to the court of law.

A contract is a legally binding agreement. When two persons enter into a legally binding agreement, they are required by law to follow what was agreed upon. A lot of work goes into writing contracts. A common misconception is that it must be written using legalize language. However, that is not true. Most successful contracts are written using plain and simple language. This makes it easier to understand for both parties, thus avoiding future conflicts. In addition, you do not need to hire a lawyer to create a legally binding agreement. As long as both parties understood the terms, agree to it, and it contains the essentials of a valid contract, it is deemed enforceable. You can even use an online template. Check out our sample templates above and start writing your agreement. All you need to do is download the file, fill in the blanks, and print.