Think of a young boy who is very hard headed. A nanny may be doing her best to discipline the boy, but he still doesn’t listen. One day, the child gets into an accident. He burns his arm because he played with the oven. The nanny, on her part, never failed to remind the boy about the danger of playing with fire. Now, who do you think is at fault? The answer is very clear. The boy is to blame. Even a good parent would blame his child knowing that he willingly exposed himself to danger. But the question is, what if the parents blame the nanny? That is when a hold harmless agreement comes to play.

What is a Hold Harmless Agreement?

A hold harmless contract is a provision usually used in construction contracts. It is a clause that protects one party against liabilities caused by the other. Subcontractors often provide this contract to builders and contractors as a form of insurance. The stipulations of a hold harmless agreement allows a contractor to claim indemnity in case a subcontractor or his workers get into an accident. The idea of indemnity is to hold someone harmless in case a business suffers loss or damage. For example, a contractor delegates a project to a subcontractor. The contractor may claim indemnification against expenses, damages, loss, and liability caused by the activities being done to complete a project. In other words, the subcontractor agrees to be liable for the consequences of his actions, freeing the contractor from any liability.

There are three classifications of hold harmless agreements in construction: limited form, intermediate form, and broad form. A limited form is an agreement where the subcontractor will only be accountable for a portion of the liability, depending on what his specific duties were. An intermediate form is an arrangement where a subcontractor is liable for all his actions but will not be held accountable for the contractor’s liabilities. A broad form is a contract where the subcontractor is liable for all the damages done not only by him, but also by the contractor.

Hold harmless agreements will comprise specific languages that you must understand before signing one. Here are some examples:

Indemnification. This term means that one party involved in a deal agrees to compensate for the losses incurred by the other party. For example, if you are a distributor selling items to a retail shop, and your agreement has an indemnity clause, it means that you are wholly responsible for the products you are selling in an event where a customer complains. Indemnity protects a business from lawsuits and liabilities. Another example is when you hire a contractor to remodel your office and an indemnity clause will keep you safe from liabilities. If poor-quality workmanship injures a client, you may claim indemnity against the independent contractor so that he pays for the client’s injury.Notice of Claim. A Notice of Claim serves as a notification for an individual who will be sued by another indicating that a claim will be filed soon. It should be filed accordingly so the claim will not be denied. After giving out the Notice of Claim, the complaining party should wait 30 to 120 days before filing the claim. This form should include the following information: your personal information, an incident report, the source of damage, police reports, ownership documents, repair estimates, payment proof, photographs, and medical reports.Assumption of Risk. This is a legal principle where one party in an agreement is constrained to receive any recompense for damages sustained due to his/her willingness to expose him/herself to danger. In other words, an assumption of risk prevents a plaintiff from demanding payment for damages knowing that he/she willingly exposed him/herself to a hazard. The defendant may assert that the other party had knowledge of the risk but took it anyway.Insurance. Insurance is a policy where a person or organization receives protection financially when losses are sustained. Insurance policies come in different forms, and they come with a price. Personal insurances are policies people usually have, but businesses require a different type of policy. Insurance policies for businesses protect them against possible risks that they may face. For example, a restaurant will need a policy that will cover for injuries an employee suffers from while cooking.Subrogation. The term subrogation refers to the right of an insurance company to pursue the individual who has caused a loss to the insured party. They do this to retrieve the money they paid to the insured party. In simple words, an insurance company pays its client directly for the losses, then demands reimbursement from the violating party.Liability. A liability is a debt one party owes to another in an agreement. Liabilities usually arise during the operation of a contract. They can only be settled by paying services, goods, or money to the violated party. Liability is an individual’s responsibility towards the negative outcome of his/her actions.Governing Law. This is a clause that declares which state or federal laws will have control over the contract when conflicts arise in the future. The governing law may differ from state to state, and courts will specifically look at the law you have chosen in your contract. This is very important because it clarifies the terms and conditions of an agreement.Jurisdiction. Jurisdiction is a court’s power to rule over a lawsuit or case within a specific area. According to Cornell University’s Legal Information Institute, there are three types of jurisdiction: over an individual, over a situation, or over a judgment sought. Note that, Jurisdiction over a situation always comes before a personal jurisdiction.

How to Create a Hold Harmless Agreement?

This may include the name of the person to be “held harmless”, the individual signing the contract, the entity offering protection, the kind of protection, and the time frame. There are three classifications of protection that a hold harmless contract covers: general, services, and property use. In construction, the agreement usually covers services.

Step 2: Include the Specific Languages

Typically, a hold harmless contract will have specific languages. The other terms that usually contain a hold harmless agreement, aside from what were mentioned above, are the: definition of terms, indemnification exemptions, indemnification authorization, defense assumption, failure to defend, etc. If you are not sure about your draft, it is better to ask for assistance from a lawyer.

Step 3: Write a Statement of Acknowledgement

In the last section of the agreement, the contractor will agree to indemnify or hold the owner harmless for any liability such as disease, sickness, property damage, death, or injury. Every state might require the specific languages mentioned above to address the issue. Therefore, it is important to ensure that all your provisions are valid with the help of an attorney. 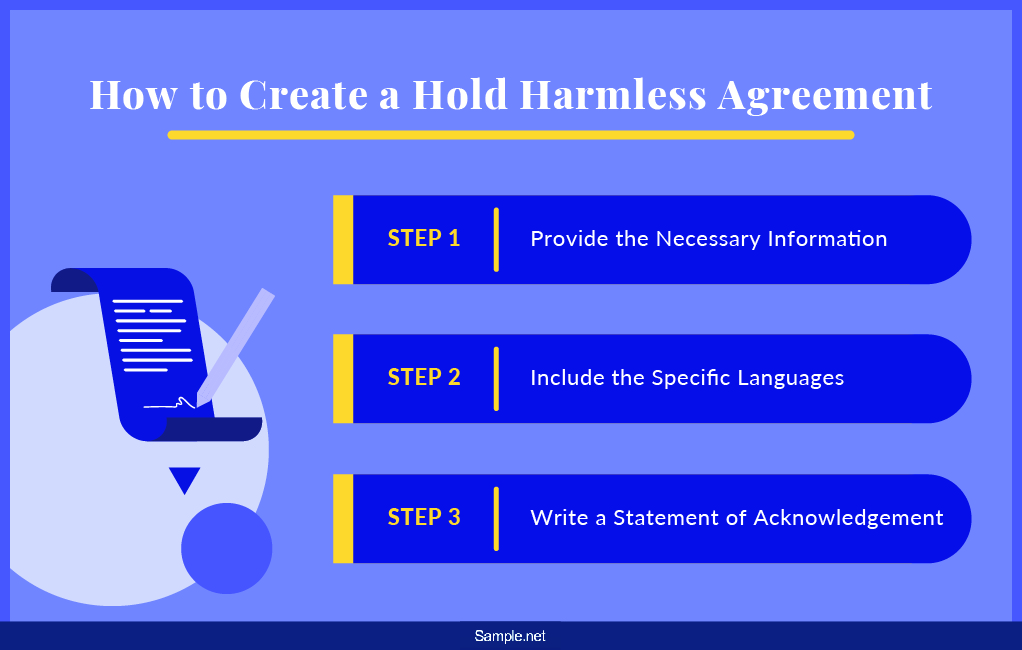 Aside from construction, where can you use hold harmless agreements?

Hold harmless agreements can also be used in real estate, sports, amusement, venue rentals, and services. In real estate, a portion of the rental contract incorporates a statement about holding an owner harmless against libel. In sports, athletes such as marathon runners, baseball players, divers, and other high-risk sports players sign a liability waiver. When we talk about amusement, some companies that offer amusement services such as horse riding, skydiving, and others require the individual to sign a waiver and recognize the danger the activity involves. Moreover, when a group of people decides to rent a venue for a special event, the owner lets them sign a release form in case an accident happens during the event. Lastly, with service providers, most commonly, the employer will let the employee sign a waiver that is similar to a hold harmless clause.

This depends on every state. Some states might not uphold contracts that are too broad in their language concerning liabilities. Some states may have laws that are against indemnification, which forbids the use of hold harmless agreements in certain scenarios. It is better to consult a lawyer to know if your contract is enforceable.

What is the difference between indemnify and hold harmless?

The difference between these two clauses may vary from state to state. Most people treat these clauses as the same, even if they have differences. For that reason, it is crucial to create contracts as specific as possible. Indemnity clauses may be more specific than hold harmless clauses, that is why lawyers recommend that both provisions be incorporated in a contract.

What is a Liability Waiver?

A liability waiver is a contract between a customer and a business. It informs a customer of the risks involved in an activity. When he/she signs the agreement, the participant acknowledges the reality of the danger and accepts it. Also, the customer waives his/her entitlement to sue the business for physical injuries he/she might sustain during the activity.