Imagine living in a world where a 40-50% chance of divorce happens to married couples. That place is where you get blinded by fancy pre-wedding photoshoots and boujee wedding plans. But, behind those relationships we root for are couples on the verge of breaking up. Apparently, such a world is a reality in the US—that is, according to the American Psychological Association (APA). While ending a marriage, couples likely argue on who gets to keep specific properties. Albeit they keep on arguing, there is no point in it since the contract they took before getting married settles these rights. This pre-wedding agreement, known as a prenuptial agreement, works as a preparation for the worst circumstances in marriage, particularly divorce.

What Is a Prenuptial Agreement? 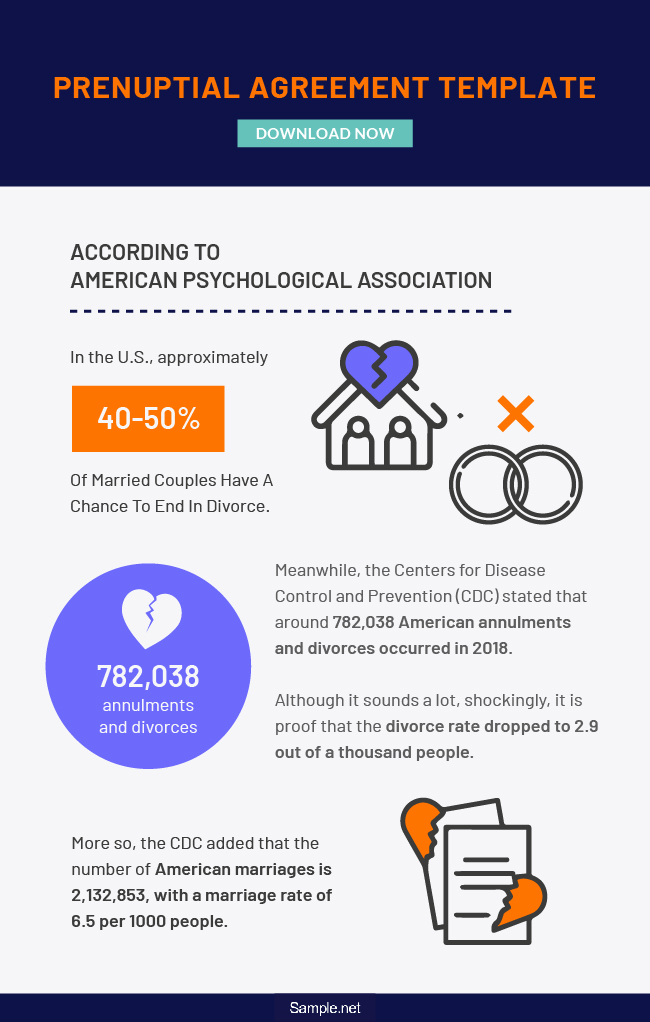 You got introduced that a pre-wedding contract or agreement prepares couples should the marriage fail. But what exactly is being prepared? First things first, know its definition. A prenuptial agreement or prenup refers to the written mutual agreement between a couple about how they handle their exclusive assets in case marriage ends through a divorce or even death. Thus, a prenup prepares future husbands and wives as to how they divide their rights and properties. That distribution happens during the end of a marriage. Expect to have it signed before a wedding. Prenups were not made to add more conflict anyway since coming up with clear ownership and legal rights is a concern to boot.

In the US, approximately 40-50% of married couples have a chance to end in divorce.

Meanwhile, the Centers for Disease Control and Prevention (CDC) stated that around 782,038 American annulments and divorces occurred in 2018. Although it sounds a lot, shockingly, it is proof that the divorce rate dropped to 2.9 out of a thousand people.

The Conjoined Benefits of a Prenup

Preparing what to do if a marriage ends may sound bad as it seems like it is highly likely that the couple may come in separate ways. However, it brings more good than harm compared to being grief-stricken if you end up getting divorced all of a sudden. Just like in making an event plan, for example, always prepare for the worst scenarios. It brings assurance that you know how to deal with such bad situations, rather than panicking and standing still for being unprepared. The same can be said with a prenup, as there are benefits from it too. What are they?

Fair Asset Distribution: Everyone has valuables, property, and other related stuff in the form of assets. When a couple decides to separate ways, they now divide the assets they used to own together. A common example is a house, and a prenup decides who gets to keep it. The sad part is when one spouse only has a few assets, that means the other wealthier spouse will have to lose more while divorcing. This effect is because he or she will have to pay for the one with needs through a financial disclosure. Fairness depends on the circumstances as well, and working with an attorney is the best step to ensure assets get distributed fairly.Debt Protection: In a divorce settlement, another issue is how to deal with the spouse’s financial liabilities. Some states assume that both assets and debts are already owned by the two spouses anyway. In protecting oneself from the partner’s debts, it will have to be stipulated under the prenuptial agreement. Nobody wants to deal with an ex’s many debts knowing that you are no longer together with that person anyway. But, a divorce may have you stuck in paying those without proper protection.Smooth Divorce Process: While divorce is already an event no one anticipates, it is still necessary to find the process easy in case you are getting there with your relationship. If divorce terms were stated correctly in a prenup, the entire process will not be more difficult on your part. Do not wait for the divorce to be the time that you agree and negotiate with how assets get divided since a prenup can handle that as early as before marriage. Thus, save time and effort with this aspect.Children Protection: Part of the biggest decisions to decide among couples is to shield their children. It may be easy for spouses to move on and look for another partner, but the children affected cannot be ignored. Upon remarrying, always consider how the new marriage affects the kids. Thanks to a prenup, a binding contract commences that aims to protect the rights and properties of children. The agreement also includes the distribution of assets for the child.Business Protection: Another concern is the spouse’s business. By marrying, does that mean both spouses own the business together? In settling this, the prenup should keep businesses as separate until liquidating it in a divorce is already unnecessary. While you deal with the prenuptial agreement cost, it is even more costly if dividing and valuing the business comes to play. Do not make the process more complex by ensuring businesses get protected under this legal agreement.

How To Process a Prenuptial Agreement

With 782,038 divorces and annulment in the U.S. in 2018 alone, it is safe to assume that a lot of marriages come to an end per year. Surprisingly, that number is considered a low divorce rate already with a 2.9 rate of 1,000 Americans. Meanwhile, the CDC also recorded how the marriage rate reached up to 6.5 out of a thousand resulting in around 2,132,853 marriages. Whether you think the divorce and marriage rates are high or low, the main point is that any couple undergoing marriage will have to finalize a prenup. To ensure your success, how do you manage that? Follow these easy steps on how to process a prenuptial agreement:

Step 1: Craft a Checklist for Prenup

Whether you plan on making a do-it-yourself prenuptial agreement or not, make sure to start with a thorough plan first. A lot of factors need consideration here, including who becomes responsible for dealing with financial liabilities. Which properties will be considered marital and separate? Or perhaps, how much is each spouse’s income? By planning, you form a printable checklist to list down everything needed to state inside the agreement. Other provisions can be forgotten without listing things ahead. Most importantly, try to communicate with your partner here since mutual understanding from both parties is helpful.

Using our prenuptial agreement templates, insert every asset and financial information needed to disclose in the form. House, income, business—you name it. Noting these assets is for the sake of property protection anyway. More so, things must be done correctly; otherwise, the court can easily keep the contract null. Full disclosure is highly required in the document, too, as there may be investigations done to prove some statements. Rest assured that presenting your prenup intentions many weeks before marriage is advantageous. Hence, everything feels ready during the wedding day.

There is no denying that reviewing state laws is vital. Prenuptial agreements can be enforceable by law, but that may depend on which state you are at. Other states do not enforce it; that is, according to the Uniform Prenuptial Agreement Act. Dealing with the laws may get a tad confusing, but doing research ahead helps a lot. For example, some statements need affirmation as an oath via affidavit. Or maybe, you legalize the prenup form by having it notarized. Follow the rules and legal stipulations, and the process will flow smoothly.

Always remember that a prenuptial agreement is a legal document too. Therefore, professional writing is required. Maintain straightforward statements since flowery words that cause more confusion will not help at all. Furthermore, be sure not to give a hint that you want a divorce. Sometimes the court can tell based on the couples’ wishes about how badly they like to divorce. They may base it on how many benefits they obtain if ever divorce happens. Even without the intention of encouraging a breakup, review your tone to avoid sending the wrong message.

Can you recall those prenup benefits discussed earlier? Some of those examples are necessary for the provisions in the agreement too. Hence, state the provisions and restrictions next. Aside from the assets, this section includes how to manage debts if things should get divided or not. Maybe you do not deserve a debt hardship in the long run if the debt was only from your spouse. This is why a set of restrictions is crucial too. What are the spouses allowed and prohibited from doing? What about the provisions’ limits? Finalize everything under contract.

Lastly, do not hesitate to get help from a lawyer for professional legal advice. Legally binding agreements get easier to understand and manage with expert help in the first place. Not confident with the agreement you drafted? Worry no more as a lawyer helps in checking that for you. At least someone reliable is around to give advice and recommendations on how to perfect the prenup before having it signed. The best part is they can answer any of your concerns regarding prenups and prevent adversities to happen.

What are other names for a prenup?

A prenuptial agreement can be referred to as a pre-wedding agreement, premarital agreement, antenuptial agreement, or even a basic marriage contract. Despite having different names, it still consists of a similar purpose, which is to settle assets and financial plans, if death or divorce takes place.

Can I create my prenuptial agreement?

Yes, a do-it-yourself prenup is allowed. However, both parties must agree to such a decision first. If a previous agreement was made already, then it can be revoked until the DIY version commences. Some couples even agree to disintegrate prenups, like after a couple of years. The point is, it will be easier to work with when mutual agreement happens.

Is a prenup a bad idea?

Even though prenups are not necessary all the time, they are not exactly a bad idea as well. In fact, it does more benefits than disadvantages, particularly in determining ownership of financial assets and more. The same reason applies if another party gets forced to pay a student loan or any form of debt he or she did not sign up for. Expect clearer terms in this agreement instead.

Despite accepting the fact that the chances of divorce may happen anytime, what matters is that all things are clear regarding how couples deal with ending a marriage. Remember, you have all the time in the world to know your partner before marrying him or her. Even a high-profile wedding budget of $10 million like Kim Kardashian and Kris Humphries’ did not last as the two had a divorce 72 days after the ceremony. Hence, the married life is not all glitz and glamour as you already think of the worst possibilities upon drafting a prenuptial agreement.