Think of a healthcare facility without standard operating procedures amid an outbreak. What can you imagine? Instead of getting treated, patients become more sick. Rather than being healers, medical professionals will also become patients. Many lives are taken simply because of the neglect of utilizing SOPs. A hospital without SOPs is not a hospital at all because it turns into a war zone. The same is true for companies or businesses, a business without a system will surely crash and fail. Specifically, a limited liability company without an operating agreement will not thrive and nor will it succeed.

What Is an Operating Agreement?

There are two ends where a business will meet; it will be either success or failure. Of course, every business wants to succeed, but what if it fails? Many businesses undergo trial and error before they actually accomplish something. For example, Reddit is presently one of the most famous online platforms in the world with about 169 million website visitors every month. Its first launch was in 2005. At that time, they had no visitors, not even one, but they continued to think of ways to make people notice their page. How did they do it? They made dummy accounts to make fake discussions on their platform until people came and took interest.

In the United States, there is a corporate arrangement where company owners are not liable for company liabilities in case the business fails—a limited liability company. This company structure is a combination of a corporation and partnership where it can take advantage of “pass-through taxation.” According to Cornell Law School, pass-through taxation happens when an individual pays the company’s taxes through his/her tax return. Furthermore, to take full benefit of owning an LLC, writing an operating agreement is essential. An operating agreement is a written contract that lays out the conditions of an LLC as agreed by its members. It serves as an operating and managing guide for an LLC to prosper.

All states in the U.S. have a common understanding of what a limited liability company is. It is a company that enjoys the benefits of a corporation, partnership and sole proprietorship. Now, let us learn some other facts about LLCs.

Members. As we all are familiar with, we call people in a partnership—partners. In LLC, owners are called members. If only one individual owns an LLC, he/she is called a single member LLC. It can also be owned by more than one individual, which is called an LLC partnership. Note that there are no other terms for members of an LLC.Types. There are two types of LLCs—domestic and foreign. A domestic LLC is a company that operates in a state where it was originally established, while a foreign LLC is a company that operates in different states within the United States. If you are making profit in different states, you should register in every state you intend to do your business. The domestic LLC is the state where you initially form your business and the rest are considered as foreign LLCs.Tax Benefits and Drawbacks. When compared to a corporation, LLC has benefits and drawbacks. An LLC owner settles the company’s taxes using a personal income tax, which may be more costly at times than a corporate income tax rate. The federal government receives personal income taxes at an increasing rate, which means that the more an LLC earns, the higher the tax is. On the other hand, corporate taxes have been reduced since 2018 and are presently at 21% from a 35% rate. Moreover, LLC owners don’t have to pay like corporations who have double taxation. Double taxation requires a corporation to pay taxes for its profits as a whole and its dividends as independent shareholders. Still, LLC owners need to pay for self-employment taxes such as Medicare and Social Security.Establishing an LLC. There are three easy and simple steps to start an LLC. First, acquire an Employer ID Number, which is mainly used as a federal tax number. Next is to enlist the LLC in your state. Lastly and most importantly, construct an operating agreement. States don’t require operating agreements to be filed, yet many states obligate LLCs to make operating agreements for documentation purposes. These states include California, New York, Delaware, Missouri, etc.LLC and Corporation Difference. To form an LLC, the members will have to file the Articles of Organization, which is a legal document that registers a company in a state. To form a corporation, the shareholders will have to file organization documents to the state it belongs to. Additionally, an operating agreement is used in an LLC for its operations. In a corporation, shareholders appoint their board of directors to create by-laws. By-laws are rules on how a corporation operates.

How to Create a Sample Template of an Operating Agreement

Appointed managers or members themselves can take control over an LLC. If it is managed by a manager, the contract should detail on how to appoint managers, when to run meetings, how to conduct voting processes, what to expect from managers, and when to remove and replace managers.

Normally, members have equal rights to vote in an LLC regardless of their membership interest. Depending on the members, an operating agreement may state that voting rights will depend on the contributions of each. In that case, members may still be given veto rights in case they don’t agree on some plans and decisions made by other members.

Confidentiality provisions can be non-compete or non-solicit. A non-compete agreement prevents a former member from competing against the LLC for a specific period. On the other hand, a non-solicit provision simply restricts a member to solicit other members and draw them away from the LLC. The latter is less restrictive because it allows a member to join another company immediately after leaving.

General or Miscellaneous provisions may include dispute resolutions, amendments, and more. Bear in mind that an operating agreement can be more than 10 pages. It is a document that can be revised in case needed. A good operating agreement is one that can address many different situations regarding the operations of a limited liability company. 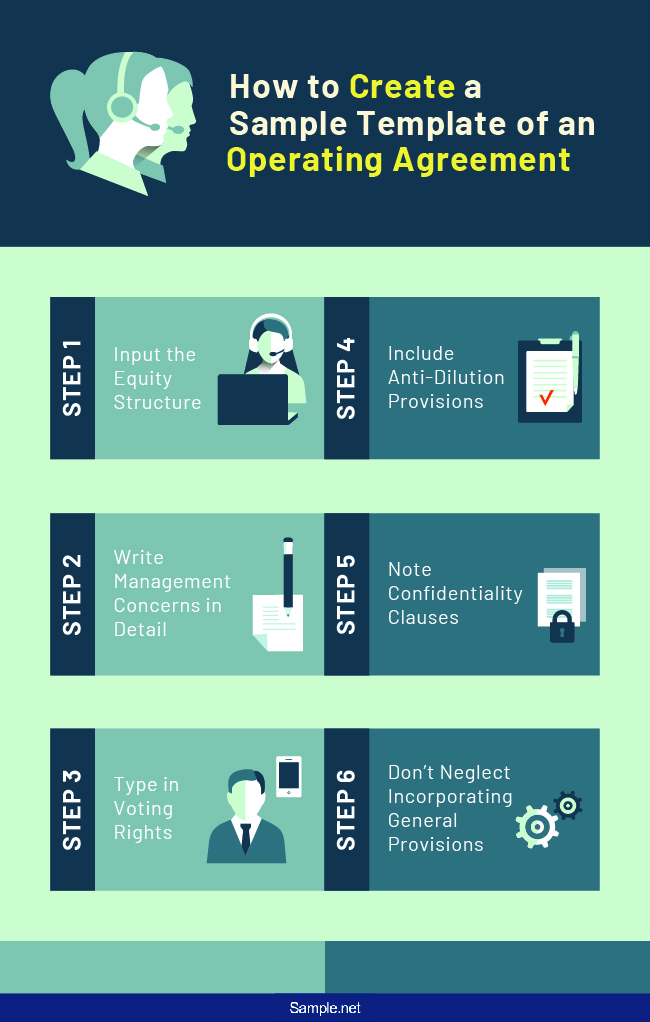 What happens if you don’t have an operating agreement?

If an LLC has many members, conflicts and disagreements may arise. Without an operating agreement, it will be very difficult to deal with issues regarding percentage interest, profit allocations, operations, and more. To deal with financial and operating issues, having an operating agreement is crucial. Also, without this contract, the state laws automatically will rule your business, which can be a disadvantage. Why? State laws can change and you may not agree with the newly imposed laws. Therefore, it’s always safe and better to have an operating agreement.

How do you get a copy of an operating agreement?

You can call or visit the office of your LLC’s state. Inquire if the company has filed an operating agreement. Some states may obligate you to fill up a form and pay a fee when ordering LLC files. Another way is to call or email the company owner and ask for a copy of an operating agreement, but your request may be denied if the owner doesn’t know you. Also, you can search EDGAR on your computer, which is an information system made by the Securities and Exchange Commission of the United States. If none of the ways mentioned work, you can employ a business lawyer to assist you in obtaining a company’s operating agreement. Note that this may cost you some money.

Is an operating agreement necessary for a single-member LLC?

How do you amend an operating agreement?

Commonly, an operating agreement is an internal file or document. When you want to change it, members must approve first. The rules written in the original agreement should be followed when making amendments. For example, a contract may require 100% of the members to effectuate changes. In a situation where there is no provision provided in the agreement, then you have to obey the state laws provided. Every state has a different rule, so you can check it on the Secretary of State Office.

Can a member be involuntarily removed from an LLC?

The articles of organization or an operating agreement of an LLC may have conditions for involuntary termination of members. Both of these documents are allowed to write clauses relating to involuntary withdrawals of members. Even if that is the case, members still have the right to receive payments which are equal to their membership interests in the institution.

An operating agreement may not be a requirement, but it is key to a thriving business. Why? This is because an operating agreement deals with a limited liability company’s financial and operational issues. Not only that, but it also protects its members from facing personal liabilities. Furthermore, it frees a business from being completely under the control of state rules, which can be very general most of the time. If an LLC is a person, then an operating agreement is the heart that keeps it alive.