Mr. Freidberg was the head of the Freidberg Law Corporation in California, while Mr. Stein worked with two others associated in New Jersey. Many lawyers hated them for successfully doing the work that they do. This is a story based on an article posted by The New York Times in 1994. According to the American Bar Association, there were about 864,000 lawyers who were under malpractice suits. The question is, are there more lawyers who take advantage of their clients now? Or are there less? One factor that may affect this number is the use of representation agreements in client-lawyer relationships.

What is a Representation Agreement?

A representation agreement is a contract between a lawyer and a client. It is an agreement that sets out the relationship between the two. Also, it outlines the compensation the client will have to pay the attorney for the service he/she is rendering. The contract should clearly state the work the attorney needs to do, especially when controversial situations arise. A representation agreement will typically include stipulations on how an attorney will interact with the client and when and how he/she will communicate information to the client. There are cases where a lawyer is hired by a client for services he/she might need at the moment. A lawyer undertaking this kind of service is called a lawyer on retainer. A client pays a lawyer on retainer only a small amount of money regularly. So, when a client retains a lawyer, it means that he/she is signing a retainer agreement with the lawyer.

According to the American Bar Association, there were about 864,000 lawyers who were under malpractice suits.

Statista reports that there were about 1.35 Million Lawyers in the United States in the year 2019. 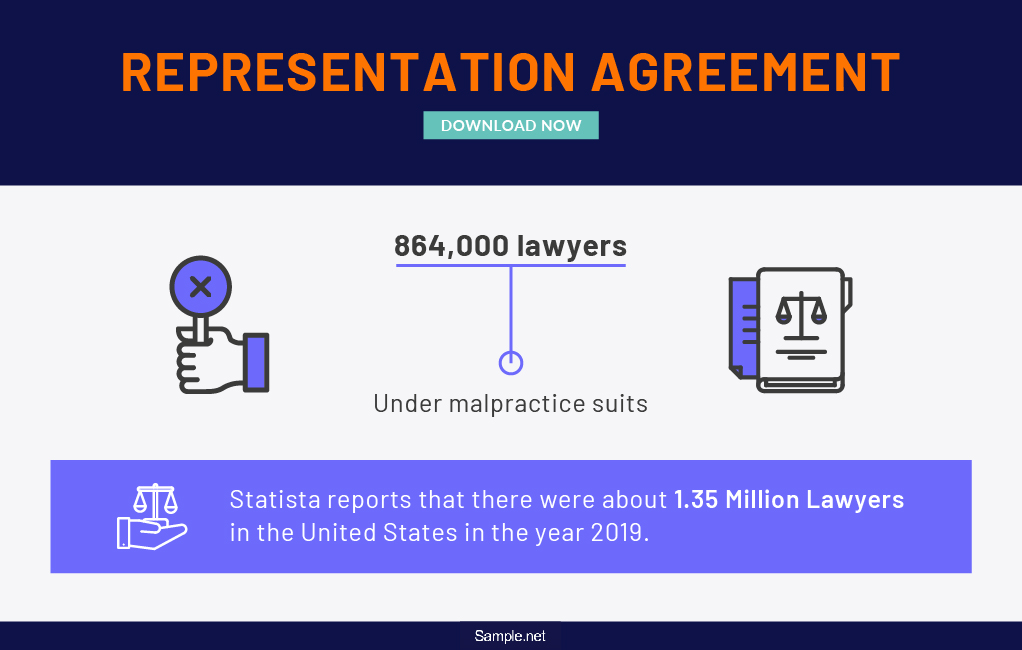 According to Statista, there were about 1.35 million lawyers in the United States in the year 2019. That is a lot. Despite an individual’s effort in searching for the right attorney, he/she may end up with one that fails him/her. Legal malpractice claims often happen when decisions an attorney makes results in the downfall of his/her clients. Here are seven common mistakes lawyers usually make.

Failure to meet deadlines. Attorneys who don’t know how to manage their time may fail in filing important documents on time. It is normal for lawyers to have busy schedules, which may also mean that they have several deadlines. Failure to meet these deadlines may become a loss for their clients and them as well. When an attorney doesn’t submit court files on time, his/her client’s money are put to waste, or worse the court will deny the case.The exploitation of finances. A trustworthy attorney, specifically a lawyer on retainer, will put their client’s money into an escrow account. If a lawyer places the money in his/her account, it will be considered as an act of exploitation. One more obvious example is an attorney stealing the client’s funds.Nonperformance. Lawyers must invest their time in investigating their clients’ actions. A lawyer must first investigate the truth of a lawsuit by observing civil procedures, gathering evidence from the other party, requesting for documents, etc. If a lawyer doesn’t do his/her obligations as a professional, he/she will be accountable for his/her negligence of duty.Failure to communicate. In any relationship, communication is vital. A lawyer who willingly refuses to communicate with his/her client is a form of legal malpractice. If a lawyer fails to update his/her client with some relevant information concerning the case, a client has the right file a lawsuit against him/her.Absence of Consent. When an attorney represents a client in legal affairs, he/she should seek the client’s consent before making any final decisions. In a representation agreement, the client is responsible for laying out his/her goals while the lawyer will help the client achieve those goals. Nevertheless, a lawyer cannot go on deciding a case alone without the client’s consent, whether it be written or verbal.Refusal to obey instructions. Paying for a lawyer is expensive. Therefore, lawyers should respect the instructions of their clients while representing them in legal proceedings. If an attorney has a better idea, then he/she is free to advise the client, but the final decision rests on the client.Conflict of interest. This is a situation where a lawyer has other interests that compete with the client’s interests. Conflict of interest between a client and attorney can come in different forms. One example is a lawyer who agrees to represent both husband and wife in a divorce.

Step 1: Determine the Type of Fee

Generally, lawyers work on a fixed, a contingency, or an hourly fee basis. Determine what type of fee you are willing to pay your lawyer. The most common among the three is the hourly fee. A contingency fee is commonly used in personal cases, and a fixed fee is the newest method of payment among the three.

In a fixed fee, a lawyer will charge a fixed amount depending on what the case is. This is common for attorneys who work on one case multiple times. For example, a lawyer may ask for a fee that amounts to $6,000 for handling a property dispute case. For this form of agreement, the contract should include a provision that prevents a lawyer from charging more than what was agreed upon. In a contingency fee, a lawyer agrees to accept the case in return for a percentage of the reward a client wins in a case. In other words, the lawyer will not receive anything if the client doesn’t win. For a contingency arrangement, include terms that specify the percentage an attorney will get, usually this type of fee ranges from 20% to 40%. In an hourly fee, a client will pay for every hour an attorney is working for a case. Rates may vary from one attorney to another. If this is what you choose for your agreement, it should specify how often an attorney will receive his/her payment.

Step 3: Include Specifications Regarding Other Fees

Other fees may include filing fees, witness fees, court fees, travel expenses, etc. It is a fact that litigation is expensive. Your contract must have provisions that wrap up other fees related to your case. If you agree that you will pay for all travel expenses, then that should be part of the contract. Note that lawyers who are working based on a contingency fee usually pay for all these other expenses. They simply subtract their expenses from the total reward.

Other terms included in the agreement may include the following: (1) The scope of representation. The agreement should clearly state the scope of your lawyer’s representation. (2) Termination agreement. The contract must include provisions concerning the client’s power to fire his/her lawyer any time or for a fair cause. (3) Client documents. The contract should state how a client can get a copy of her documents or files which are in the hands of his/her lawyer. (4) Duties and responsibilities. The responsibilities of both parties in the contract should be clearly stated. (5) The power of the attorney. Lastly, the contract must specify the power of an attorney to decide on a case.

Does a lawyer have to keep communication with a client confidential?

Yes, a lawyer must keep things exclusive and confidential between him and his client. Therefore, an attorney should not disclose any sensitive information to any person uninvolved in the case without the client’s consent. Mostly, except in some situations, this applies to every client-lawyer relationship, even if the client didn’t request confidentiality.

Is it a lawyer’s obligation to return a client’s phone call?

Lawyers are often busy bodies working on many different cases all at the same time. Regardless of that fact, an attorney still should keep his/her client updated about the developments of the case. An attorney who does not return one phone call, doesn’t automatically equate to legal malpractice, but it can be a sign for you to hire a different lawyer. If you see that your attorney has not been working on the case, you can file a legal malpractice claim against him/her. Every lawyer has a responsibility to work professionally and skillfully on a case until it is finished. Failure to fulfill a duty is a breach of contract under a representation agreement.

Will it be okay if my lawyer has a lawyer friend on the opposing side?

Even if attorneys from opposite sides of the case are friends, it doesn’t necessarily mean that a conflict of interest exists. As long as it is not a relationship with a sibling, parent, spouse, or child, there will be no conflict of interest. Every lawyer is under oath to be loyal to their client. Therefore, all lawyers must do their jobs in ways that avoid conflicts.

Can a lawyer charge me more than what we have agreed upon?

A lawyer should base his/her fees on the standard fee agreement he has willingly signed with the client. Usually, fees are paid at the beginning of the arrangement, so if a lawyer asks for an additional charge, the client may demand an explanation. If the fees are impractically high, a client can negotiate with his/her lawyer for a reasonable fee, or request for a decision from arbitrators, or pay the fee but pass a complaint against the lawyer, or sue the lawyer for a reimbursement.

Can I sue my lawyer if he/she fails to meet the deadlines?

It can be difficult to win a malpractice lawsuit against a lawyer, and you will have to establish many factors to win the case. An attorney’s failure to submit important documents on time is an act of negligence. To establish your case against negligence, you have to prove the following: (1) The lawyer’s failure to represent competitively, (2) The lawyer’s negligence of duty, (3) The lawyer’s violation caused you harm, and (4) The damage caused you monetary loss. To prevail in a legal malpractice claim, you must also state the reality that if the attorney had been working competitively, you would have won the case.

If it is true that lawyers have become more negligent, then clients on their part should be wiser by utilizing representation agreements. Not only will this document set out the fees to be paid to an attorney, but it also states the duties and responsibilities of a lawyer towards a client. In some way, representation agreements force lawyers to do their work competitively and fairly for the sake of their clients.