If you are wondering who the richest real estate tycoon is in America—it is Donald Bren. This man started developing his property in 1977 in partnership with other investors. In time, Bren bought all the portions of his fellow partners and became the only shareholder of the Irvine Company. According to Forbes, Bren owns a total of 115 million square feet of property in Southern California. Of course, this rich man didn’t achieve all of this without using an ownership agreement. Everything must have been documented, or else he would have no right to such a fortune.

What Is an Ownership Agreement?

A study conducted by Jennifer Rudden showed that the rate of homeownership in the U.S. reached about 65.1% in the year 2019. It is essential for an unmarried couple, a group of friends, or a family of businessmen whose goals are to become co-owners of a particular property to use an ownership agreement. You usually use this agreement in instances where two or more individuals desire to become proprietors of the same real estate property. However, this type of arrangement is not limited only to real estate but is also applicable to other personal properties such as artworks, antiques, boats, vehicles, stocks, and more. It is the agreement that sets and controls the relationship between co-owners in case conflicts arise later on. Note that ownership gives a person the right to possess a treasured property under the protection of the law. 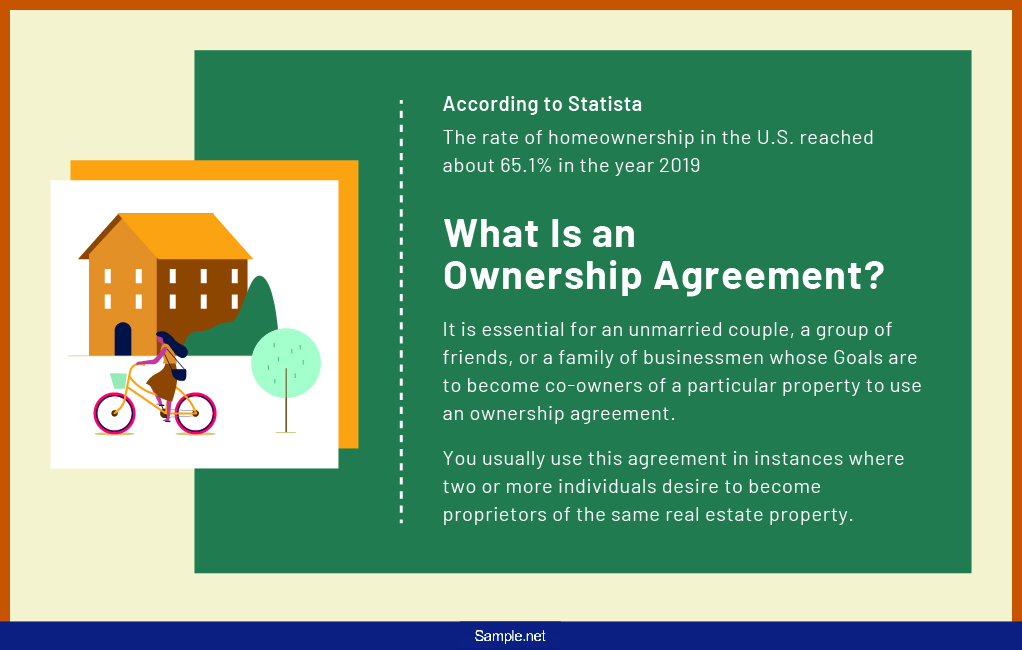 As mentioned earlier, an ownership agreement is beneficial in real estate. Real estate is basically a property of land that includes anything within its bounds. People can have various reasons for owning a property, but how do you own one legally? Here are the common systems applied in owning a real estate property:

Single Ownership: The most simple type of ownership is generally known as “sole ownership”. The title explains itself. This happens when a single individual possesses all the interests of an asset. In a certain situation where an owner dies, the property will be automatically transferred to his/her beneficiary after undergoing some processes. The beauty of this comes when a beneficiary inherits a home with a different market value at present, and when the time comes for him/her to sell it, capital gains are no longer applicable.For For example, a son inherits his father’s property with a market value of $700,000, the basis for tax will still be $700,000 even if his father bought it for $300,000. So when the son decides to sell the property, he will be able to avoid capital gains. Capital gain is the profit a person gets after selling an asset minus the original price.Partnership: Two or more businessmen who plan to own property are linked through partnership. This connection involves the participation of every co-owner to run the property. There are two types of partnership: limited partnership and limited liability partnership. In a limited partnership, it is only the general partner who manages the property without the help of limited partners. In a limited liability partnership, a co-owner’s private assets are protected in case of business experiences corporate loss. Only the exact amount invested will be mainly affected.Linked Tenancy: When two individuals or more own a common real estate property, they are linked by a legal agreement through “joint tenancy.” Joint tenancy allows each owner to have the same rights and responsibilities. In an event where one owner passes away, the interest of the deceased will be directly passed on to the other property holders without the need to go to court. This type of title cannot be transferred to family members who are not part of the agreement, which means that it can be only be owned by legal co-owners whatever their relationship is. If the agreement is signed between a wife and a husband, this can be a disadvantage when they decide to be divorced.Tenancy in Common: In a scenario where two or more individuals own and share the same rights of one property, they are in agreement called ”tenancy in common.” This agreement may sound similar to joint tenancy, but they are different in many ways. Therefore, what is the difference between tenancy in common and joint tenancy? Compared to joint tenancy, TIC allows more members to join the agreement even if it has already existed for some time. Moreover, in TIC, each owner has the right to sell their part of the property without affecting the others. When one member of a joint tenancy contract desires to sell their part of the property, the entire contract will be breached. One more difference between the two is when a joint tenant dies—a TIC contract permits the transfer of property to the beneficiary of the deceased.Tenants as One: Married couples who own a title together are bound by an arrangement, which is also known as “Tenants by Entirety.” If the wife or husband decides on some modifications of the property’s interest, both must agree before the decision is finalized. Same with joint tenancy, if one holder in the agreement dies, the one left behind has all the right to own the entirety of the property. According to Investopedia, almost half of the states in the U.S. are legally tied to this type of agreement.Community Property: If, during a couple’s time of marriage, they purchase and acquire properties, both are entitled by the law to own a percentage of the assets depending on which state they belong. The exception is only when both agree to exclude some properties from being part of the community property through a postnuptial agreement. Typically, assets that a spouse obtained before marriage are not regarded as community property. This idea aims to protect the rights of both parties.Corporation: Real estate can also be owned by a corporation where several shareholders are a member of, but the property here is considered as a separate entity. The property bought by a corporation is primarily used for its operation. It gives its workers a place to create and supply their products to the marketplace. 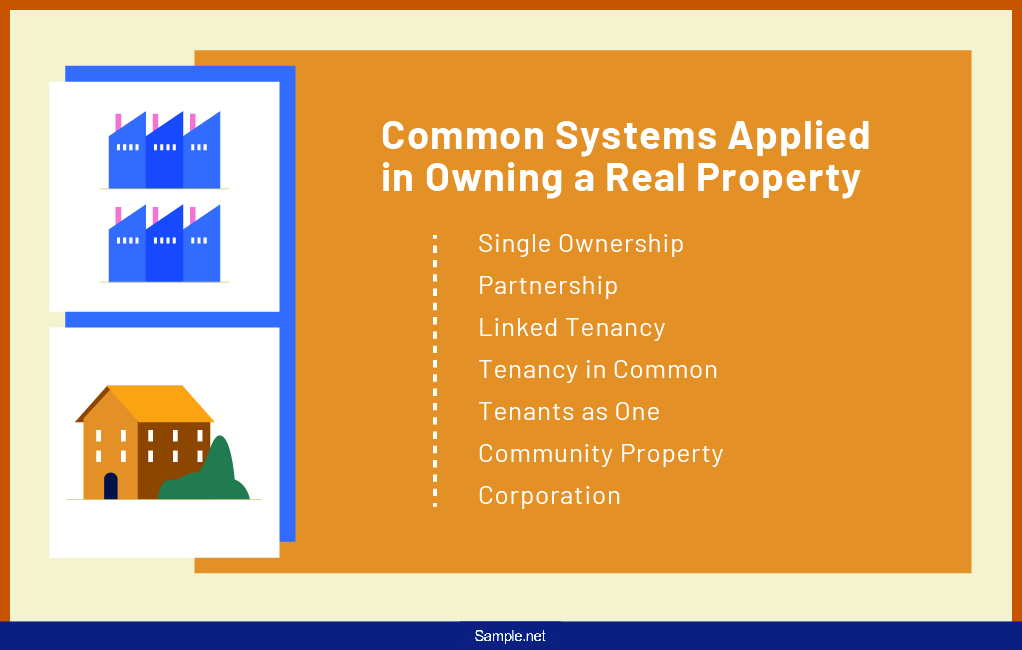 How to Outline a Basic Ownership Agreement

The term ownership agreement is comprehensive and can be categorized under many classifications. With that in mind, here is a basic outline of a general ownership agreement that covers all categories belonging to it. We are going to answer the question: What do you include in this agreement? And what is the importance of each section? Read the steps below, to find out:

In this initial section of the agreement, the background information of property owners, which are their names and addresses, are written. Above that information is the date the contract is signed. Moreover, this information is the definition of terms. Major terms within the contract should be well-defined to help each contract holder understand all statements written in the agreement. Also, this will allow all owners to have the same view and interpretation of all provisions provided.

Step 2: State the Purpose of the Agreement

The purpose of the deal is essential, where you record all intentions by both parties in detail. It can include issues concerning the division of interest among members, the development and control of the land, the relationship between co-owners, the laws they follow, the authority of each one, third party relations, etc. This sets the standard of how each owner should behave under the contract. In addition to that, this will also serve as a basis for solutions in case misunderstandings arise.

Step 3: Write How Finances should be Managed

All Co-owner should contribute to the everyday expenses needed to maintain the property. This should cover property taxes and insurance fees. Property tax is the tax a property owner. Other times, a corporation has to pay the government. The amount is determined by the government, depending on the location and value of the land. Real estate owners pay taxes that are allocated to improve sewers, finance water, assign law enforcers, construct roads, and all other services that will help the community as a whole. Furthermore, property insurance fees serve to pay for policies that will provide protection and coverage for liabilities.

A Co-owner should not dispose of a property without the authorization of his/her fellow co-owners. Also, if a prospective buyer of a co-owner wishes to enter the agreement, he/she must obey and follow the terms. When a co-owner desire to leave his position in the contract, he/she should give the interest to the remaining co-owners at an amount equivalent to the original value he bought his part of the property. In case the co-owner who wishes to terminate the contract doesn’t agree, he/she could have his interest for sale to a bona fide purchaser. With these terms, all co-owners will be secured of the interest of their properties.

Specific conditions for contract termination are written in the later section of the agreement. This comprises the different situations that could happen where a co-owner violates the purposes of the contract. Having conditions for contract termination is just as important as encouraging contract fulfillment. Enforcing this will protect the parties involved if ever disagreements arise in the future as a result of a breach of contract. Remember that this agreement is a legal document under the control of the state laws being used to interpret it.

The list of general provisions includes the governing law, resolution for disputes, force Majeure, legal expenses, or whatever is applicable to complete the whole agreement. They are incorporated in the last section of the deal because they don’t seem to fit in between other parts. Thus, they are also referred to as “Miscellaneous” Provisions. Even if that is the case, they are still necessary to fill up what is lacking in the contract. 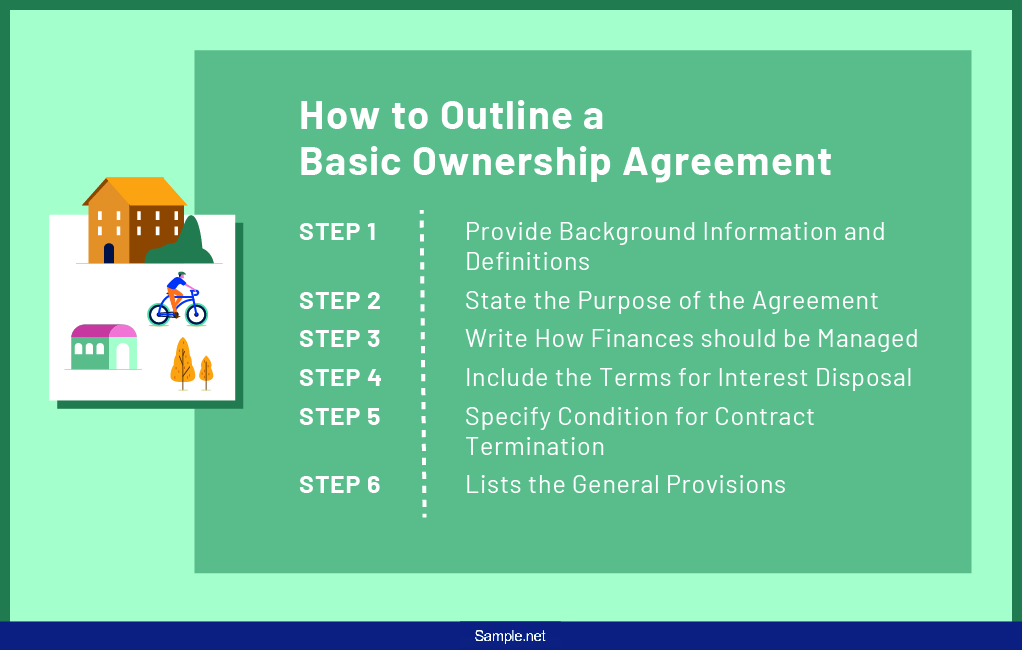 If you want to be successful in your real estate endeavors, then you must begin with the basics. Success doesn’t happen in one blink of an eye. It is a step by step process. If success for you owns property or several properties, then you shouldn’t neglect the use of an Ownership Agreement. With one, you are assured that the things you’ve worked hard for and value the most are kept safe and secure. You should also know that an ownership agreement is evidence of your success.