Behind every newbie is an opportunity of experience. One day, a student may struggle to keep up with a regular employee’s work. But, he or she could be the next business manager fast forward into the future. The same is expected out of interns wherein they take a special internship program to train and work for the experience. Of course, an employer does not expect interns to master the job right away since their career is just beginning. Yet, it does not mean an intern should simply slack off in a company since employers expect tasks to complete too. How should terms be managed between an employer and an intern? Denote it under an internship agreement.

Internship Agreement: What Is It?

How to Create an Internship Agreement

How can I get free interns?

How long do internships last?

What are the requirements for an internship?

Internship Agreement: What Is It?

Does the word intern ring a bell to you? Probably because you have been one before graduating from college or before starting your very first job application. An internship is a position called for trainees and students working under a particular company. What makes them different from regular employees is how interns often work without pay. Moreover, these interns only work temporarily to complete their education and acquire work experience. Hence, an internship agreement is an official document containing the negotiated arrangement between parties, and it defines the nature and terms of an internship. Besides employers, the current university or school also issues this agreement to prove that a student’s internship is solely for educational matters.

Based on a study, interns have a bigger chance of being hired as full-time employees rather than the usual applicants.

Furthermore, Forbes added, via the National Association of Colleges and Employers (NACE), that 97% of big employers are more likely to hire interns in 2014.

On the other hand, Statista confirmed, via Glassdoor, that the highest-paid business for interns comes from the tech industry. 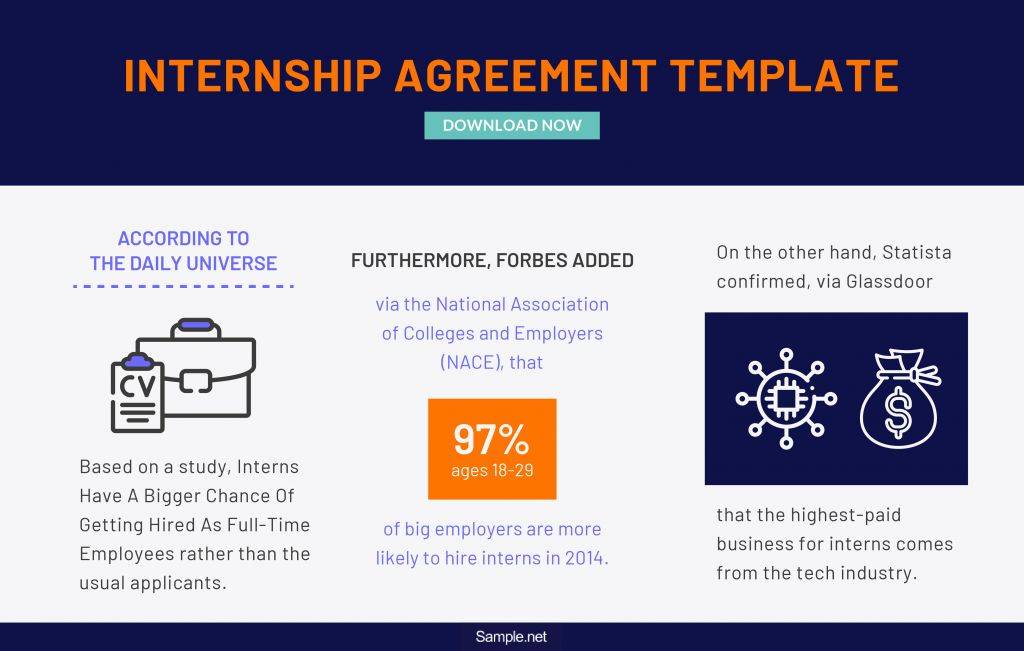 Interns Over the Years

Before the 1980s, try asking those who took college if ever they are familiar with the term interning. Chances are they had a different experience back then since internships used to be called apprenticeships. Where did that term come from? An apprenticeship can be traced back in the 11th or 12th century in European trade guilds. This time was where workers under trade guilds taught young trainees, starting with the most basic tasks. As these learners graduated, they began earning wages. The purpose of apprenticeship was more on filling in for job openings until newbies received training and evaluation.

From the 1890s and the 1920s, the medical field even practiced apprenticeship already. Moving forward; the late 1960s eventually became the foundation of formal internships as the term became known. By the ’70s and ’80s, many colleges introduced internship programs. Universities paved the way for internships as a process to compete in jobs. Now on the present, internships continued to be more advanced, with many programs relying on technology. What is the point of all this? Simple—to prove how influential interns are in contributing to businesses. Thus, the need to produce correct and well-planned internship agreement is vital for an orderly program.

Introduce the Intern’s Purpose: A general internship agreement begins with an introduction stating how the agreement is specifically to help interns develop their skills and knowledge within the business. That way, no party will have to assume that the contract is an employment agreement or contract.Label Accordingly: In writing, always use the appropriate terms and labels. Its purpose would be common sense. For example, it is safe to mention the words the internship coordinator or provider and the intern instead of saying the employer and the employee.Propose an Evaluation: After a certain period, indicate in the written agreement that interns get a job evaluation to fulfill their educational objectives. This evaluation is not for naught as it aims to help the school know about how the intern performed in the company. Whether he or she did well or the other way around, it is stated under the form.Ensure the Intern Expands Knowledge: The last thing any party wants to hear is that the intern simply learned how to prepare coffee or staple files in business. An effective internship should have interns do essential tasks that help them improve their skills and performance. Not giving them productive work fails the objective of interning only.Limit the Internship Program Duration: Disclose in the form that interns are not full-time employees as they are only around for a certain duration required of them. A common example is that interns only have until six months or whenever their required hours for interning is fully consumed. Others have up to two months as a summer internship only. The point is to finalize it in the document.Pay with the Appropriate Amount, if Applicable: Indeed, interns usually are not paid. But, other companies include payment agreements for interns. For example, a Facebook intern receives $96,000 in a year as such a tech business is one of the highest-paid businesses for interns. To prevent mixing up interns as regular workers, indicate their pay to be of a lower amount than the minimum wage.

How to Create an Internship Agreement

Before any intern starts to work at a particular organization, an agreement must be signed between parties first. This internship agreement, in the form of a document, contains all the necessary information there is to know about the internship program. Indeed, interns send an application form first to their chosen business. Once their permission is approved, it is not right when a proper contract about the internship is missing. How do you make it right? Just follow these steps:

Who are the interns? From which school are they? And who provides their internship? Such questions all go down to party recognition. An agreement should state the names of each party to confirm who is who. Start by listing down the names of those who will be interning. Incorrect spelling is discouraged here, as the names might imply to other people already. Not sure how to present it? Never fret since our professionally-made internship agreement templates are ready to download anytime. Allow these templates to guide you in knowing what to input in the form.

Step 2: Describe the Roles and Responsibilities

After identifying parties, specify what the intern’s duties and responsibilities are. Remember that interns are not merely having a vacation at the business since they have tasks to complete as well. A simple job description would suffice as long as the intern’s duties are understandable enough. For example, a journalist intern will have to write an article analysis from published news articles before coming up with their own full story, until such an intern is ready soon. Keep in mind that interns may be hired as regular employees someday if they do well. In fact, NACE stated that 97% of big employers would consider hiring their interns.

A common mistake done by an internship supervisor or coordinator is giving the wrong tasks for interns. The duties specified on the document must be educational or helpful enough for the student to enhance his or her skills. Involving a strategic plan in deciding what tasks they will take is a useful approach to ace this. Moreover, think of how doable every obligation is too. Maybe interns were given the most challenging tasks right from day one without even teaching them how to manage those. Keep the jobs feasible instead wherein interns can show their skills.

Avoid forgetting to jot down the internship schedule and duration into a planned timesheet. What is the use of these sheets? Those will log how many hours in a day interns cover. If students are late or absent, then everything is recorded for compliance. As they finish the required hours at some point, interns receive a certificate of acknowledgment regarding their internship completion. This acknowledgment, in the form of a letter or a certificate involving the employer and coordinator’s signature, marks as their official graduation from an internship. In other words, these students are now ready to work full-time.

One of the essential segments to tackle in agreements is the terms for dispute. Anything can happen, so there are rules to set, including the internship completion policy.  A good character reference from an internship letter of recommendation will not suffice if the intern breaks specific rules during the internship. There are regulations for termination among companies anyway, and the same thing applies to internship programs. As long as interns comply with the stipulations, they have nothing to worry about. As much as possible, keep the laws clear and understandable for lesser confusion.

How can I get free interns?

As a business owner, inquire from colleges and universities in case they need opportunities for their interns with your business. Just make sure to negotiate with these schools about how the arrangements go until the school recommends your business for interning. Other universities even offer their students some credit in exchange for considering local businesses in their internship.

How long do internships last?

Legally, universities give around three to four months of internship. Another common rule is to ensure interns complete approximately 20-35 hours per week. Although those are standard regulations, some interns are recruited for a long time, depending on the terms agreed between parties.

What are the requirements for an internship?

As hiring employees include specific stipulations, the same happens to interns. Commonly, students having at least 2.7 for overall GPA receive a big chance to be accepted in an internship. Also, where these trainees apply should be related to their career goals. Take note that they were trained related to the field in their education. However, expect requirements to differ from every business since employers have different demands.

Visualize the best manager or supervisor you can think of. This person you visualized might be you someday. Remember that such a person was once a beginner too, and, most particularly, had undergone an internship before. More so, the need to produce a well-thought-out internship agreement is pivotal to produce a great experience for interns in a company. Who knows? A well-planned contract or agreement may just be the foundation of an intern who can make it big in the industry after ten years. With the right guidance from the business, high expectations for future employees commences.